Share All sharing options for: NIU Linebacker Devon Butler Was Stabbed In The Chest (But He's Fine)

Raise your hand if you've been shot and stabbed in the last two years. Consider yourself luck then, I guess!

You might remember Northern Illinois linebacker Devon Butler, who was shot and nearly killed in a senseless act of violence. Well he made a full recovery and is back with the team this season. And he still is fine, I should make a point to say that. But yet another case of "wrong place, wrong time" befell Butler, who was injured in a stabbing over the weekend. The alleged stabber was arrested and charged with assault, and according to the Huskiewire article, Butler was treated for non-life-threatening injuries and was back with the team the very next day.

And while the article made it clear that both incidents were separate, they were darn close to one another in proximity: 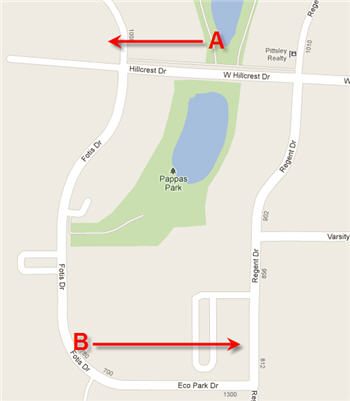 "A" was where he was critically shot in April 2011. "B" is where he was stabbed yesterday. Now this is all off-campus housing so no connection can be made. "A" was a drug deal gone bad (that Butler had no part of, although the gunman thought he was connected). "B" looked to simply be an argument with another guy who felt that the resolution involved a knife.

I implore the world please stop using lethal objects on Devon Butler. I'd like to see him play football this year. Also ... maybe that neighborhood's just bad luck for him.