After a week of news stuff actually happening and getting some housekeeping out of the way, we're back in the swing of the Dream League. Lots of playoff hopefuls' dreams are dashed but a couple spots are still up for grabs. But the big game was undefeated 2011 Toledo — who the simulator LOVES and you can't blame them — against the 2008 powerhouse Ball State Cardinals.

True to form, the Rockets gave us a wild finish with a combined 38 points in the fourth quarter. After a 69-yard pass from Nate Davis to Briggs Orsbon with 4:41 to play, Ball State pulled ahead by seven. Then UT responded with an epic drive to tie the game with 1:14 to play. What happened next?

TOLEDO — ...Oh, just MiQuale Lewis. That's what happened. On their own 23 they used him for four carries totaling 33 yards, then he also caught a key 13-yard pass. That set them up for an Ian McGarvey 48-yard field goal which was slipped just inside the upright for the time-expiring win, and the first loss on 2011 Toledo's watch. Huge win.

For UT, Eric Page had a huge game: 11 catches, 149 yards and two touchdowns. Terrance Owens went 28-for-43 for 391 yards and two TDs. Adonis Thomas rounded out the trio for 27 carries, 96 yards and a TD; he also gained 43 yards on three receptions.

OXFORD — Almost never a doubt but now it's official: Miami clinches the Ealey division. Mike Smith actually helped the team most, running for 96 yards on 16 carries, catching three passes for 63 yards, and scoring a touchdown each way. Ben Roethlsiberger went 21-for-28 for 323 yards and four TDs but also two interceptions. Martin Nance caught five passes for 104 yards and two touchdowns.

And Kent State got 17 points the weird way: five field goals and a safety. Dave Pavich was 5-for-5 on field goals with a long of 49 and the others either 35 yards or shorter. Josh Cribbs passed 10-for-20 for 104 yards, then ran 23 times for 89 yards. James Harrison didn't have a sack but did have both interceptions.

HUNTINGTON — Closer than advertised, but still a win for the Herd. UB had a couple chances to key a tying or game-winning drive but Drew Willy's 4th and 1 pass was broken up in the final minute. But they couldn't have made it close without James Starks, who got Player of the Game honors in the loss. He ran 28 times for 102 yards and two touchdowns, then caught five passes for 51 yards.

Marshall had a rocky game from Chad Pennington, who went 18-for-28, 298 yards and two interceptions. Doug Chapman only had 37 yards on 19 carries but did score twice, and James Williams led the team with three catches for 94 yards. Billy Malashevich cleaned up stalled drives with field goals of 20, 20 and 38.

KALAMAZOO — Pow. That quickly put the Broncos in prime position for a playoff spot and knocked the Falcons right out of consideration. Jeff Welsh led the Broncos with a 18-for-32, 219-yard, three-touchdown game. Robert Sanford ran 24 times for 155 yards and a touchdown. Steve Neal caught five passes for 51 yards and two touchdowns. In backup role, Ryan Harris passed 4-for-4 for 56 yards and a touchdown. Marty Harig had two sacks. And Brad Selent went 2-for-3 on field goals, long of 53.

Omar Jacobs went 23-for-31 with 279 yards, a passing touchdown and a rushing touchdown. Shaun Suisham hit a 49-yard field goal and that was it. And all 17 points in one quarter, then nothing in the other three. The sim knows this school so damn well.

MOUNT PLEASANT — The upset almost happened, but Akron's first play in overtime was a Dan Basch fumble. That set up an easy Andrew Aguila 23-yarder to clinch it.

Dan LeFevour went 12-for-25 passing for just 116 yards and a touchdown, but added 72 yards on 20 rushing attempts. Larry Knight sacked the QB twice.

Akron's lone score was courtesy of Jerell Ringer, who only had two rushes for six yards. Bobby Hendry led the Zips with 72 yards on 24 carries and Charlie Frye had OK numbers: 22-for-32, 262 yards and an interception. Cam Yeow got two sacks and Jason Swiger was a perfect 3-for-3 on field goals.

OXFORD — Another fourth-quarter comeback with much help from Travis Prentice puts a dagger into the side of the Rockets trying to compete for that last playoff spot. Prentice led the game with 25 carries for 210 yards and two touchdowns. Sam Ricketts passed 22-for-32 attempts for 293 yards, a passing touchdown, a rushing touchdown and an interception. Damian Vaughn caught five passes for 104 yards and the go-ahead fourth quarter touchdown. John Scott booted three field goals (37, 40, 22).

A curious box score for Toledo. Chester Taylor didn't lead the team in rushign (27 carries for 67 yards, a touchdown), that went to Antwon McCray (six carries for 85 yards). But he did lead them in receiving with a single 63-yard catch. Tavares Bolden passed 18-for-28 for 271 yards, two touchdowns, a rushing TD and an interception. Andy Boyd had a sack and an interception.

PHILADELPHIA — Huge numbers for Michael Turner: 237 yards on 34 carries and a touchdown. Sam Hurd added five catches for 108 yards and a touchdown. Josh Haldi passed 20-for-29 for 286 yards, three touchdowns and an INT. Rob Lee had a 28-yard interception return touchdown.

Not much for Temple. Bernard Pierce was bottled up for 53 carries on 26 yards, but he did score. I really didn't mean to pile on Temple with this. Hey, they had a good year. But among the annals of all-time great teams, they are down there.

ATHENS — The Bobcats scored the first game off a turnover, but that's all they got. Tyler Tettleton went 17-for-23 passing for 211 yards and two touchdowns. Donte Harden provided 102 yards of rushing on 21 carries and a touchdown; he added 25 yards receiving. LaVon Brazill had 71 yards and a touchdown on four catches and Jelani Woseley returned an interception for a 36-yard TD. EMU got 73 yards from Anthony Sherrell on 17 carries and a 14-yard reception. 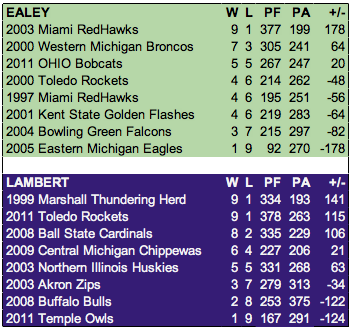 So we're far from deciding the Lambert Division. Ball State and Marshall have yet to play, so 2011 Toledo is still in a good position. Meanwhile, 2003 Miami owns the division, while 2000 WMU is in great position to clinch although they have yet to play 2011 OHIO. One more game going their way and they also get in.