Central Michigan football unveiled a pair of new jerseys today for the upcoming season. Although two weeks from the start of the season seems awfully close to have an event like this, remember that it was during the middle of last season when they added gold pants to the wardrobe. Some of the jerseys are a nice addition, while some are, to put it nicely, not such a nice addition.

The best addition that the Chippewas made, at least in my opinion, is the new gold jersey to match the gold pants from last year. This isn't the first time that the maroon and gold have experimented with a gold jersey, but I feel this time they got it right.

If you remember the disasters below from 2008 that they wore in a prime time matchup against Ball State, you'll be happy to know they look nothing like the new jerseys. These still live on in memory up here in Mt. Pleasant as the "piss colored jerseys." 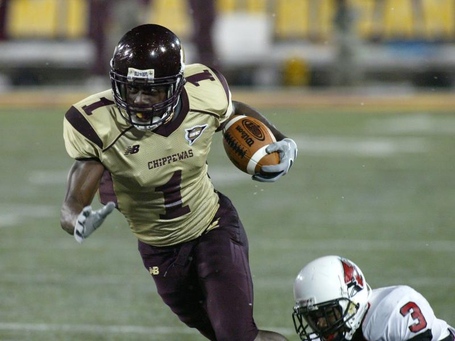 CMU lost that game, and scrapped those jerseys, never to be worn on the field again. But a couple of years ago when CMU signed an agreement with Adidas, the school also decided that every team at the school would wear the same colors: Maroon and gold. With no variations on either color.

After they wore gold pants last year, I thought it would be great if they added a jersey in the same color, and they come up with what I think is a very solid addition for a couple of reasons. 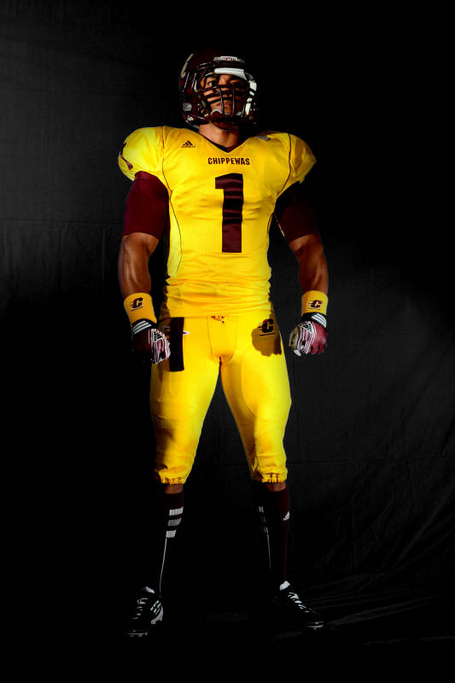 I really like this jersey because it is bold, but not loud like when West Virginia wears all yellow. This is a darker color than that, and easier on the eyes. Plus, I think this jersey paired with either the maroon, gold, or white pants will make a nice combination. Well done here.

However, it wasn't all good news at the unveiling, because in addition to the gold jersey, the Chippewas also decided to add an all black jersey set. 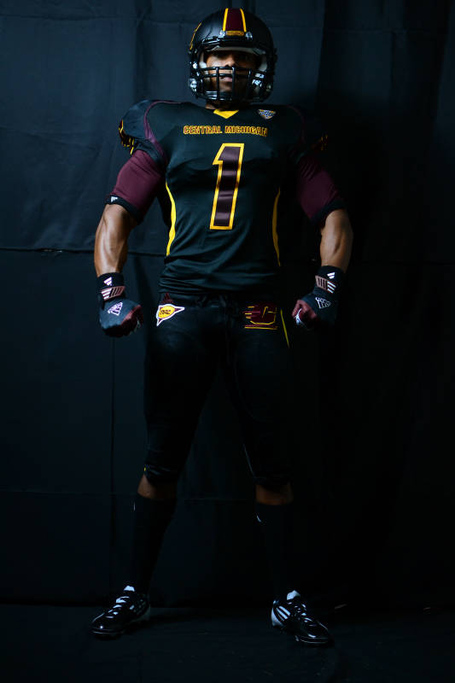 Where to start with these monstrosities. First, in case you didn't know black is not an official school color, so it makes zero sense to make an all black jersey. Also, they are about five years late on the trend of making an all black jersey. The italicized/slanted number font is ugly, and the maroon just seems to clash with the black. CMU also tries to keep up with the times by going with a matte black finish on the helmets. The helmet is probably the best part of this new set, because the matte finish lets the colors stick out a little more, but the new stripe on the top of the helmet is another miss.

Overall, I think the gold jerseys are tremendous and look forward to seeing them wear those with any combination of the pants. While the black jerseys are a mess all around that make us look an Arena Football League team. The only thing I wish they had done was created a gold version of the helmet rather than the black one. 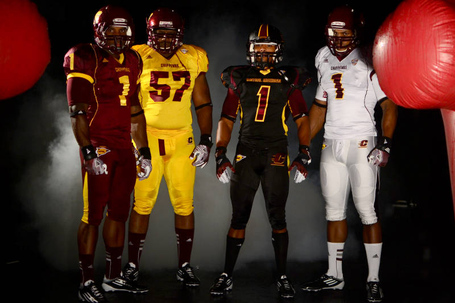