Interesting timing, considering the CMU jersey announcement, as new friends UMass also unveiled their new uniforms yesterday. While we were given a look at the rumored black helmets displaying a new logo, the hyped all-black uniforms did not make their way onto the turf for yesterday's Media Day event. Instead, we were given a look at the more traditional maroon jersey-white pants combination. Photo after the jump. 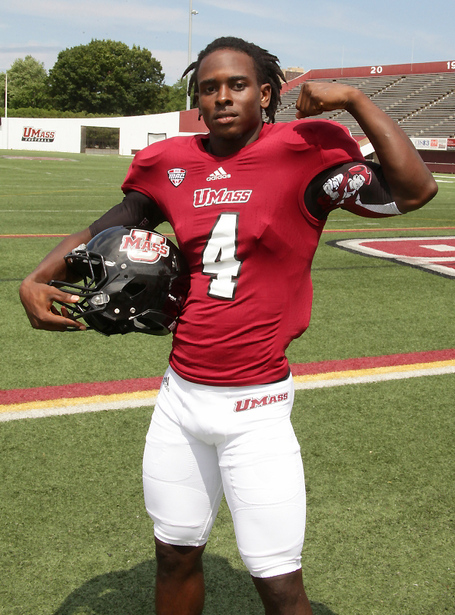 A couple interesting things to note: the players were all wearing Minuteman-themed compression sleeves under their jerseys. The right sleeve shows the UMass wordmark, while the left hosts the team's Sam the Minuteman logo. An interesting touch, but I guess we should have expected something like that given the way college uniforms have been experimented with lately.

The new helmets are nice, and show off a new UMass logo that has not previously been associated with the team. Some have pointed out it might read as "Mass-U" to those unfamiliar to the team. I'm a fan of this new look, as I always thought the logo on the previous version of the helmet was much too small. That's definitely resolved now with the gigantic "U" serving as the backdrop to the "Mass" partial wordmark.

The jerseys themselves are great. They got rid of the outrageously wide side panels that always seemed out of place, and focused instead on a clean, tight look. The one complaint I have is that the numbers appear to be heat-set rather than sewn on, but that's a fairly minor detail when you're talking about watching the games. I would expect the road whites to be paired with maroon pants, and again we should see the all-black look come in at least a few times this season as well. No indication has been given as to which jersey will be the dominant home theme, but I would expect the two to be used interchangeably through the season.

So what do you think? Did UMass come up with a good look, or do they still look like they belong in the FCS?