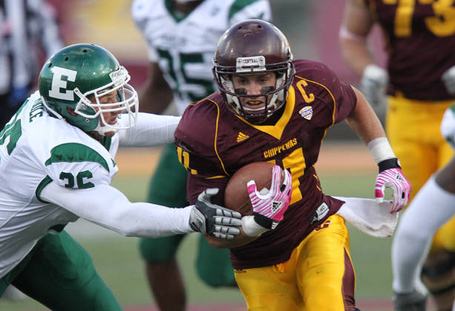 The Central Michigan Chippewas kick off their 112th season of football tonight at 7pm against the Southeast Missouri State Redhawks on ESPN3; CMU is looking for it's 3rd straight win in season openers, as well as it's 6th straight win in home openers. The game shouldn't be close, but there are a few things that I will be looking for tonight, that may help answer a few questions about this years Chippewa team before getting into the meat of the schedule.

CMU and SEMO have met one time, back in 2004 where the Chippewas picked up a 44-27 victory at Kelly/Shorts Stadium.

SEMO plays in the Ohio Valley Conference, and are coached by Tony Samuel, who is entering his 7th season as the head coach of the Redhawks. Last season they finished at 3-8 overall. The Redhawks are similar to CMU in that they struggled last season, and return most of their starters from last year, including 9 on offense, 7 on defense, and all of their specialists from last season.

SEMO runs a multiple set, and had a great ground attack last season, finishing 9th in FCS at just over 233 yards per game. However, the Redhawks only averaged 132 yards per game passing, despite attempting over 20 passes per game. Their two leading returning receivers combined to catch 45 passes last season. However, SEMO lost it's starting quarterback from last season, so there is inexperience at the position. Redshirt freshman Scott Lathrop will reportedly get the start for the Redhawks.

Another similar trait that the Redhawks shared with CMU last season was their inability to stop the run. Last year the Redhawks surrendered 251 yards per game on the ground. The Redhawks will lean heavily on Blake Peiffer, who set a team record with 151 tackles last season, and was named Preseason Conference Defensive Player of the year.

What To Look For

CMU returns a wealth of experience and playmakers on the offensive side of the ball, and faces a team who had a terrible defense last season. Also in their favor is the fact that the Redhawks will be starting a guy making his first collegiate appearance. I think this will give the Chippewas a chance to figure out some of the things that plagued them last year, as well as a chance to perfect some other things before next weekends showdown with Michigan State.