Toledo at Bowling Green: Game Preview for the Battle of I-75

The Falcons and Rockets play for some big MAC stakes on Saturday. BGSU is in a dogfight with Buffalo and Ohio in the East, while Toledo cannot afford another loss in the West. The result of this game will go a long way in determining who will play in Detroit in just over one month.

Share All sharing options for: Toledo at Bowling Green: Game Preview for the Battle of I-75

It is finally time for the 78th edition of the rivalry between the Bowling Green Falcons and Toledo Rockets, which is now known as the "Battle of I-75".  Bowling Green holds a 39-34-4 edge in the series.  This year's game holds more mutual importance in the race for the Mid-American Conference than it has over the last several years.  Each team has five games to go, and as the division races are currently structured, neither team can really afford a loss.

BGSU is in a two-team race for the Eastern Division title with Buffalo and Ohio.  The Falcons have yet to play both teams but would strongly prefer to maintain (at worst) a tie for first place.  At the moment, Bowling Green and Buffalo are tied with 3-0 records, while Ohio is a game back at 2-1.

Toledo is in somewhat more perilous shape in the Western Division.  Like BGSU, Toledo is in a three-team race in their division, with Ball State and Northern Illinois.  The Cardinals lead the division with a 4-0 mark, while NIU is also undefeated at 3-0 in league play.  Toledo trails those two with a 2-1 record.  More importantly, that loss came to Ball State, which costs them a potential tiebreaker.

The Rockets do have NIU remaining on their schedule, but at this point, a second MAC loss would all but eliminate them from the division race.  Why?  Three of Ball State's four remaining MAC contests are against Akron, Miami and Central Michigan. 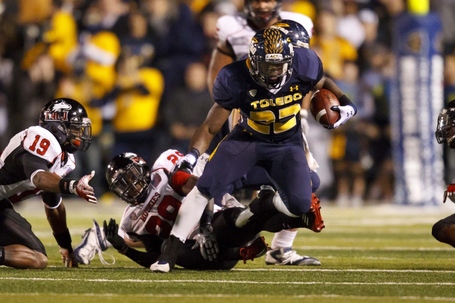 So, the stakes for this game are high.  This fact should only increase the fun factor for the match-up, as rivalry games are notoriously intense anyway.  And in this case, Bowling Green has added incentive.  Only the players who were on the team in Dave Clawson's first year (2009) know what it's like to beat Toledo.

That's right -- the Rockets are on a three-game winning streak in the series.  Toledo's fun started in 2010 with a lopsided 33-14 decision, but the last two games have been hotly contested.  In the last meeting at Perry Stadium, Toledo took away a 28-21 win in 2011.  BGSU led 7-0 at halftime and had the game tied 14-14 in the fourth quarter before a Matt Schilz interception led to a Toledo touchdown that gave the Rockets the lead for good.  The Rockets won 27-15 in last year's meeting.  Bowling Green's last win in the series occurred in Clawson's first season.  The Falcons won 38-24 at Perry Stadium on the final day of the 2009 regular season.

How should we expect the 2013 edition of the BG-UT rivalry to play out?  If either team expects to win, they're going to have to shut down the other's running game.  In recent wins, Toledo has been very effective against BGSU with the run, and that includes 130 yards in last year's game.  Whether David Fluellen can play or not, Toledo must continue this trend.  On the other side, Bowling Green's bread-and-butter has been runs that set up the play-action pass.  Their offense is most effective when Travis Greene can gain yards and cause the defense to fall for Matt Johnson's ball fakes.  If Toledo keys on the run early and slows it down, Johnson's fakes will be far less effective.

How do the teams rank running the ball and against the run?  On offense, Toledo is second in the MAC and BGSU is third in rushing.  On defense, Bowling Green is fourth and Toledo sixth against the run.  But...look at the yards per carry averages.  Those tell a slightly different tale.  Toledo has a 6.4 yards per carry average compared to the Falcons' 4.9 on on offense.  On defense, the Rockets allow just 3.9 yards per carry, while BGSU gives up 5.0 per rush.  If numbers don't lie, edge to the Rockets.

What about passing, you ask?  Well, this is where you get some separation in the opposite direction.  Matt Johnson's passing game averages 262.9 yards per game (3rd in the MAC) and 8.5 yards per attempt.  The Falcons also have a 10-3 TD-INT ratio.  Toledo's passing game, led by Terrance Owens, accounts for only 190.7 yards per game (10th in the MAC) and a meager 5.9 yards per attempt.  They also have as many interceptions (six) as TD passes.

Defensively, the Falcons have the same edge.  Their pass defense is second in the league with just 191.3 passing yards allowed per game.  Their average yards allowed per attempt (6.2) and touchdown passes allowed (7) are the MAC's best numbers for each category.  Toledo is eighth in the conference and has allowed 231.9 yards per game (including 8.3 per attempt), although they've given up just eight touchdown passes.  Edge: Falcons.

(Of course, the last item comes with a caveat: Owens threw for 303 yards versus BGSU last year.)

If the game comes down to special teams, Toledo will probably have a slight edge.  Bernard Reedy, thanks in part to his efforts on kickoff returns, is second in the MAC for all-purpose yards.  He averages 23.2 yards per kickoff return and has a long of 59.  Punting appears to be relatively even, as both teams' punters are right next to each other in the MAC punting leaderboard, but the Rockets definitely have an edge at kicker.  As improved as Tyler Tate has been this year (and he has been much improved), Jeremiah Detmer is easily the MAC's best placekicker.  He's nailed 12-of-13 field goal attempts, compared to 8-of-11 by Tate.

Both teams are relatively healthy on the injury front, but a key player on each side will miss the game and one other injury question will likely not be answered until game time.  Toledo linebacker Trent Voss fractured an arm and was lost for the season during the Navy game last Saturday.  For Bowling Green, wide receiver Chris Gallon suffered a season-ending knee injury two weeks ago at Mississippi State.

The game-time decision will be about Toledo running back (and MAC rushing leader) David Fluellen.  Fluellen injured his back against Navy and has practiced only sparingly thus far this week.  His status for the game is still to be determined, but it would certainly be a huge loss if he cannot play.  His absence would put much of the game on quarterback Terrance Owens.

As for predictions, none will be offered here except to say that the game should feature the biggest crowd of the year in Bowling Green and should be a close, well-played, fun edition of this rivalry.

To the winner will go the spoils -- and by that, I mean that they will be one large step closer to playing in Detroit for the MAC championship in just five weeks.

Toledo at Bowling Green: The Battle of I-75