BCS Rankings Week 14: Northern Illinois Jumps Up To No. 14

After a second consecutive impressive nationally televised win the Huskies move up two spots to No. 14, ahead of Fresno State, UCF, and Louisville.

Share All sharing options for: BCS Rankings Week 14: Northern Illinois Jumps Up To No. 14

Going into the final week before championship weekend in college football Northern Illinois is sitting in the drivers seat for a return trip to a BCS bowl berth. A week after slipping one spot to No. 16, NIU has leapt up two spots to No. 14 in the BCS standings.

Only a week ago NIU actually slipped in the BCS rankings, and were sitting just behind fellow BCS-buster hopeful Fresno state, trailing the Bulldogs by about .40 points. But after improving to 11-0 (7-0 MAC) on the season NIU made an impressive .90 jump in the BCS rankings, moving up ahead of Fresno State (10-0, 7-0 MWC), which dropped from No. 15 to No. 16 this week following a 63-29 win over New Mexico on Saturday. 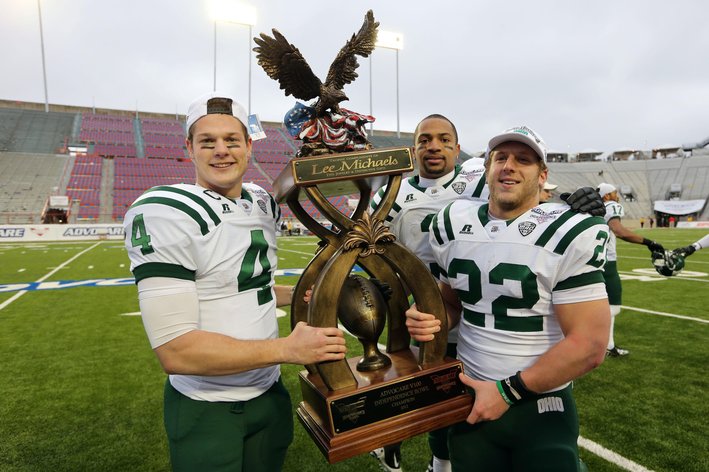 Our in house Bowl guru, Matt Daley, takes a look at the Bowl landscape following Week 13 and has an interesting projection on where NIU might wind up come this postseason.

Note that by being ranked No. 14 and ahead of fellow non-AQ Fresno State, as well as the likely American AthleticConference champion UCF (No. 19) NIU would receive a BCS bowl berth if the season were to end today. Even with two games left if NIU can stay ahead of Fresno State and UCF (which actually dropped a spot in the updated BCS rankings) without UCF finishing in the top 16, NIU is in a BCS bowl. Even if Fresno State slips into the top 16, if NIU can climb to No. 12 or higher in the final standings the Huskies receive an at-large bid. Right now with a home game left vs. WMU (1-11) on Tuesday and a MAC championship game next Friday odds look good that Northern Illinois will be in another BCS bowl come January.

In the human elements of the polls the Huskies did receive slight bumps this week, moving up to No. 20 in the Coaches Poll and up a spot to No. 17 in the Harris Poll. The bump up certainly helped NIU this week, but NIU is up to an average of No. 7 in the computer polls, a five spot increase over last week.

Up next for NIU is a Tuesday night game at home vs. Western Michigan (1-10, 1-6 MAC) to close out the regular season. The Huskies get to play for the MAC Championship next Friday, December 6, in Detroit against the winner of this Friday's Bowling Green-Buffalo game. These are the last to opportunities for NIU to move up in the BCS polls before bowl season begins.