With just about 2 weeks before the start of the 2014 MAC Gymnastics season, we dive in and preview each team as they look to flip their way to the top.

After taking home their 4th straight MAC Championship last season, the Central Michigan Flippin' Chips and head coach Jerry Reighard continued to build on the MAC's most dominant gymnastics program. They tied their own record for most consecutive MAC Championships won (4), expanded their lead for most MAC Championships (14), and Reighard just added another tally to his insanely dominant record for most titles by any one coach (14). In fact, if you took out Kent State (11 titles), the rest of the MAC can't even touch the Chips.

So what does this season have in store?

Kent State ran the table last year, but just missed winning the MAC Championship, finishing 0.225 points behind CMU and WMU for the title (yeah, Western Michigan tied with CMU for the Championship). Can Brice Biggin win his 8th MAC Championship in his 20th season since replacing Rudy and Janet Bachna?

Western Michigan has hung around the past few years, and must replace Dave Kuzara, who resigned after last season to go back to being an assistant coach at Michigan. Kuzara rebuilt the program, which faltered after winning the MAC Championship in 2006.

What about everyone else? Let's dive in with a team-by-team look, starting from the bottom of last season.

Not only does Ball State have to replace last season's MAC Senior of the Year in Emmons, but Saleem steps in for Nadalie Walsh, who left BSU for Utah State. Tough. It gets even worse when you consider that the Cardinals only return 9 letters from previous teams, suggesting a young squad. More bad news in the fact that 3 of those letters came from two gymnasts who didn't compete last season.

So who should you keep an eye on? We're going to go with Leah Wilson on the balance beam. The two-time letter winner looks to be the senior leader for the young team. While not an All-Around gymnast, she should be a good mentor and motivator for the young squad.

Despite finishing in last during the regular season last year, EMU responded with a decent performance to take 6th in the MAC Championship. Wilce returns for another season, where he appears to be a staple in the Eagle program, as two of his children even attend EMU.

As for this season, the Eagles will be led by stellar sophomore Khadijah Hudson. Hudson, an All-Around gymnast from Hebron, Kentucky, won two Gymnast of the Week awards last season, as both an All-Around and as a specialist. Hudson is accompanied by Paulina Miller (floor, vault, balance beam) who was considered a couple times for the weekly specialist award as well.

BGSU, winners of 3 of the first 5 MAC Championships, looks to end their drought this season behind some youthful talent. After getting married in the off-season, Kerrie Turner looks to show everyone why she won MAC Coach of the Year last season by trying to get the Flippin' Falcons back to the top of the MAC.

It won't be easy, but having the defending MAC Champion on the balance beam is a good place to start, and sophomore Nocella will be looked upon to grow her All-Around game while continuing to deliver on the beam. Also look for Jamilah Ali to provide a lot of help this season. The junior finished tops in the MAC on the vault, and lost the MAC Championship on the specialty due to a tie-breaker (I assume difficulty). It'll be interesting to see how far the Falcons fly this season.

After back-to-back 4th place finishes in the MAC Championship by NIU, Morreale and the Huskies look to get into the thick of things this season and finally get that elusive MAC Championship (they are the only team without one). In fact, a big step would be to finish 3rd for the first time since 2005, or 2nd for the first time ever as well. Either way, they have a lot of work to do.

Morreale has a couple good gymnasts to work with, starting with the senior Gotlund. The senior All-Around gymnast will have to be solid in and outside of action, providing the senior leadership for a fairly balanced team. Fellow upperclassmen Natasha Jufko (balance beam) and Jaelyn Olson (vault) look to provide solid specialty work as the Huskies look to harness their inner Jordan Lynch.

The road to redemption begins now. After a superb season last year, they came up short in the MAC Championships. Now, just 3 years removed from placing 12 at the NCAA Championships, Biggin and his Golden Flashes squad look to regain the top spot from Central Michigan.

And why not bet on the Kent State? They have the defending 2-time defending MAC Gymnast of the Year and MAC All-Around Champion in Marie Case, the past 3 winners of the MAC Specialist of the Year (all graduated, but still), and a championship caliber program. Look for Whitnee Johnson to also step-up and provide some solid scores for Biggin's squad.

Did you know that current Western Michigan Athletic Director Kathy Beauregard holds the WMU record for most MAC Titles won in gymnastics at 2? It's true. She is one of 5 coaches to hold that title in MAC history along side Biggin and Reighard. Now Jernigan steps up after WMU tied for the MAC Title last year and must continue to build where departing coach Kuzara has the foundation for a solid program.

Webber is the defending MAC Freshman of the Year (OK, can we seriously just start calling the MAC Freshman of the Year award the WMU award? I'm willing to be AT LEAST 1/3 of all current MAC Freshmen of the Year are from WMU. I'll wait). Webber is also a very solid All-Around gymnast and the only other gymnast besides Case to win multiple Gynmast of the Week awards last season. The "Flippin' Broncos" also boast the defending vault champion in Jessi Buis, also a sophomore. The talent is there, but can Jernigan keep them towards the top?

CMU vs Kent State has to be one of the fiercest rivalries in the MAC. Petzold won the MAC All-Around Title in 2012, and tied with Case for MAC Gymnast of the Year last year to go with the Reighard vs Biggin coaching histories. When these two teams meet, it is always a spectacle of high quality college gymnastics, and expect to see more of the same this year from the 4-time defending MAC Champs.

Kylie Fagan on the uneven bars and Halle Moraw on the balance beam look to help the Chippewas continue their path of dominance. Moraw also is the defending MAC Champion on the floor. And in case you were wondering, Petzold is one of just two seniors on the team and has a younger sister Kirsten that also competes for the Flippin' Chips.

The MAC surprisingly put 4 teams in the GymInfo Pre-season Poll. Well, receiving votes, but as any of us MAC Fans can tell you......... 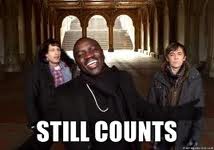 Back to the season as a whole. Central Michigan astoundingly hosts all 3 of their fellow ranked teams in their head-to-head meets. That's one hell of a scheduling boost. CMU also hosts #24 Maryland to start the season, #16 Illinois and #7 Michigan in the middle of the season, and travels to the Illini towards the end.

EMU hosts the MAC Championships, but could finish last place in the regular season again without a lot of help. Even though I know little about gymnastics, I don't think losing one of your best gymnasts and replacing a coach should get you ranked (Ball State) and they could be middle of the pack this year. Western Michigan has the talent and the gymnastics equivalent of Chris Collins as their head coach in Jernigan. Can they bring it together?

Kent State will again be dominant, but their schedule has a nice rough patch in the middle with 4 meets on the road over a stretch of 5. Of those 4, 3 are the ranked MAC schools and the other is a trio with #7 Michigan and BYU in Ann Arbor. Oof.

In the end, it comes down to who will win the MAC. Since anything can happen in the Championship meet, here are our pre-season rankings for standings.