One champion was crowned after a tight battle while the other won in record-setting dominance at yesterday's Mid-American Conference Indoor Track and Field Championships at Eastern Michigan's Bowen Field House.

Eastern Michigan won the men's title over Akron by the score of 157½ to 142, with Kent State third (113½ points), Buffalo fourth (73 points) and Central Michigan fifth (39). Eagles head coach John Goodridge was selected as Coach of the Year, and EMU distance runner Terefe Ejigu was named the meet's MVP. 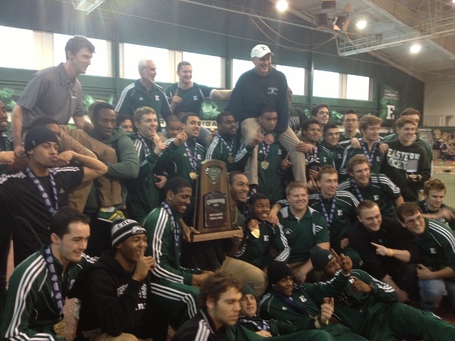 For Eastern Michigan, the theme of the day was a total team effort. The Eagles grabbed the lead after the first running event on Saturday, on the strength of a 1-2 finish by Gregorz Kalinowski and Ejigu. Eastern scored in every event save the heptathlon (the truncated indoor version of the decathlon), which saw a bizarre finish when a timing malfunction required a re-run of the concluding 1000 meters. Akron did well in its tehcnical-event strengths of the hurdles, heptathlon, and vertical jumps, but could not put together enough points in the flat running events to hold off the Eagles.

Ejigu won his MVP award after running a tough triple for Eastern Michigan, with a victory in the 5000 meters on Friday night (14:33.83), plus a runner-up finish in Saturday's mile (4:12.02) and then a come-from-behind win in the 3000 meters (8:24.43) off a furious last 100 meters. He credited the boisterous home crowd for helping him win the 3k, saying that he was ready to give up and admit defeat with 150 meters to go but gaining strength from the roar of his teammates and supporters rattling around the old fieldhouse.

Kalinowski, Ejigu's teammate, was named the meet's Most Outstanding Track Performer, after a distance triple of his own. He anchored the Eagles's winning distance medley relay on Friday night, and then won Saturday's mile (4:10.65) over Ejigu and took second in the 800 meters (1:51.76).

There were plenty of other big efforts for EMU. Matthew Williams and Cameron Bolton traded wins in the 200 meters (Williams first, Bolton third) and 400 meters (Bolton first, Williams third) and then finished off the meet with a dominating last two legs on the 4x400 relay, leading the Eagles to a win 3:13.63. Donald Scott, a wide receiver for Eastern who scored three touchdowns last fall, won the triple jump with 49' 10½" (15.20 meters) to go with his fourth-place finish in Friday's long jump (23' 1¾" / 7.05 meters).

The unsung heroes might be the ones that put Eastern Michigan over the top. Teron Turner and Anthony Jones both threw lifetime bests in the weight throw, finishing third and fourth and gaining ten big points. Pole vaulter Max Babits broke his own school record with a clearance of 17' 5¾" (5.33 meters), but more importantly he broke up Akron's dominance of the event, splitting the Zips' 1-3-4 finish. Babits' improvement in 2013 has been remarkable, adding eleven inches to his lifetime best.

The meet's single best effort largely got ignored. Buffalo shot putter Jonathan Jones broke the meet record on Friday with a distance of 64' 3¼" (19.59 meters), which earned him the award as the meet's Most Outstanding Field Performer. The distance ranks him fifth in the NCAA and, while fields won't be set for another week, it will almost certainly qualify him to the NCAA Championships at Arkansas' Randal Tyson Track Center on March 8-9. 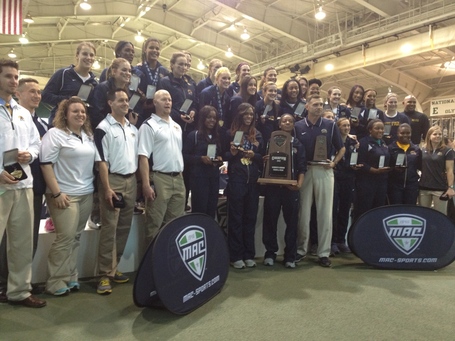 Buffalo's Shaunte' White was named the Most Outstanding Field Performer for winning the 20-pound weight throw. Her winning distance of 69' 8" (21.23 meters) represented a massive breakthrough for the senior, adding more than two feet to her previous personal best. It will likely qualify to the NCAA Indoor Championships, to be held in two weeks.

How the MAC and Track Fit Together

College track and field has a small but dedicated following, as does the Mid-American Conference. The two dovetail together better than you might realize.

The MAC has a long and proud tradition in track and field, and nowhere more so than at Eastern Michigan's Bowen Fieldhouse. First opened in 1955 as a multisport facility, it's now dedicated to track and field. More than fifty yards of banners hang along the backstretch, celebrating EMU's Olympians and NCAA champions. The track is now named for retired coach Bob Parks, who is old enough to have seen Jesse Owens run yet still spry and working at the meet.

Eastern Michigan has probably had the most success of all the MAC teams on the NCAA and international level, producing Olympic gold medalists in Hayes Jones (110 hurdles, 1964) and Hasesly Crawford (100 meters, 1976) but other schools have had plenty of success. Olympic champions have come from both Bowling Green (Dave Wottle, '72) and Miami (Bob Schul, '64), and one of the few NCAA team champions from a MAC school are the 1964 and '65 Western Michigan cross country squads. Bowling Green can also point to a runner-up finish at the 1972 NCAA Indoor Championships.

Athletes in track and field tend to have a much friendlier relationship with their adversaries. Trash talk and staredowns are basically nonexistent, and handshakes and congratulations to competitors are the norm. Decathletes are famously collegial due to the massive amount of time they spend together, with rivals checking each other's steps in jumping events and catching each other's poles in the vault.

Even among the star athletes, the "student" part of "student-athlete" has real meaning. Ohio U's Juli Accurso, an All-American distance runner who won the 3000 meters and anchored the winning distance medley relay, took off last year's outdoor season to travel abroad as part of her studies as a French language major. White, the weight throw champion who will likely compete at the NCAA Championships, said she's had trouble concentrating at practice due to her heavy studies to get into medical school and the worries that accompany that pursuit.

One of the other things that makes track and field different is that it is many competitions in one, and there are many ways to achieve success. Take my Bowling Green Falcons, for example. They're in a rebuilding phase after a recent coaching change, and their goal was simply to avoid last place. Yet they went home on a big high note, as the team in the 4x400 relay, the meet's final event, surprised themselves by shattering the school record by over two seconds.

If you've not been to a college track meet, I invite you to come out some time. The MAC Outdoor Track & Field Championships will be at Akron on May 9th, 10th and 11th. Watch this space for regularly updated track and field action from around the conference.