In just her second year of active competition, Bowling Green thrower Brooke Pleger has arrived on the national stage. This month, she has the opportunity to earn a spot at the NCAA Division I championship meet. No Falcon track and field athlete has risen that high in nearly a decade.

One of the many great things about the Mid-American Conference are the athletes, unwanted by more prominent schools, who come in with a chip on their shoulder. They rise above expectation and prove that hard work can make anything possible. Fans were witness to it just last month, when a MAC athlete was selected first overall in the National Football League draft.

If the last two months are any indication, Bowling Green's Brooke Pleger has joined that group.

On Thursday, Pleger won the MAC championship in the hammer throw. Her winning toss, which traveled 216 feet and three inches, broke the championship meet record by over two feet. The previous record holder, Akron's Stevi Large, set that mark in 2009. She also went on to win the national championship that year.

Pleger's throw also would have been the eighth-best distance nationally during the 2013 outdoor season. I say "would have been" because it wasn't. That throw wasn't even Pleger's best of the season.

Her best throw actually took place at the Northeast Ohio Quad in Akron on April 5th. On that day, she flung the hammer an astounding 219 feet and nine inches. At the time, that was the second-best throw of the year nationally. Even now, it still ranks fifth, behind only throwers from Arizona State, Princeton, UCLA, and Kansas.

The throw in Akron broke a BGSU record which Pleger had set on March 30th in Raleigh, N.C. at the Raleigh Relays. In that event, she set a new high-water mark for the Falcons with a distance of 212 feet and seven inches. That mark destroyed the old BGSU record (191 feet, six inches) by almost 21 feet, and it broke the Raleigh Relays meet record that had stood since 1999.

The amazing thing here is that Pleger is just a redshirt sophomore. Two years ago, she topped out with a mark of 174-10 at the 2011 MAC championships (good for seventh place) before competing in that year's United States Junior Championships.

How did she improve in the hammer by 45 feet in just two years? At the end of her freshman season, BGSU hired Lou Snelling to run the track and field program. Snelling hired Matt Conly, formerly of West Virginia University, as an assistant coach responsible for throws. Conly, a graduate of Ball State, had a lot of success with the Mountaineers and designed some top-notch training programs. That carried over to BGSU, and that intense training has paid off enormously for Pleger. 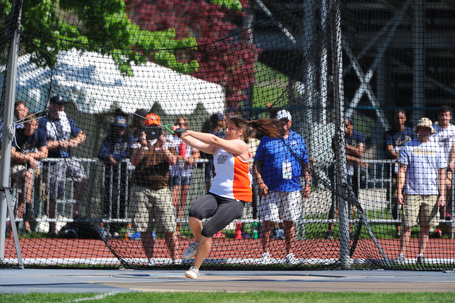 Pleger's MAC championship in the hammer is the first outdoor title for BGSU in any event since Kerri McClung won the shot put in 2005. Also in 2005, McClung was the last BGSU athlete to qualify for the national championship meet. When she competes at the NCAA East Regional later this month, Pleger must place in the top 12 to move on to the national meet. As noted above, she is currently ranked fifth nationally.

After the MAC championship meet, Pleger was named the MAC's Outstanding Field Athlete of the year. She is the first BGSU athlete to wiin the Outstanding Athlete honor in the 27-year history of the award.

Of course, why end there? Pleger's throw from the Northeast Ohio Quad earned her an automatic berth at the 2013 USA Outdoor Track and Field National Championships. Those are held in Des Moines, Iowa from June 19-23, two weeks after the NCAA championship meet.

It would seem that the sky is the limit for this newest Falcon star, both for the remainder of this season and for her final two years at BGSU. Certainly, her performance at the NCAA Regionals and (hopefully) beyond bears watching.

(It should be noted that Akron's Brittany Funk has played a close second to Pleger for the entire season. The two had an outstanding duel in the hammer this weekend at the MAC championships, and Funk's throw of 216-9 at the Northeast Ohio Quad places her seventh nationally.)