We're starting a mailbag feature here at Hustle Belt, it shall be named Hustle Bag.

Share All sharing options for: Hustle Bag: Who would win a MACtion hot dog eating contest?

You're probably wondering "what the hell is a Hustle Bag?" Well friendly (or not so) readers, if you guessed that it's a gritty, rust belt themed Gucci purse, you'd be close, but wrong. Hustle Bag is our new mailbag feature at Hustle Belt. It's a chance for you to have your questions answered. So without further adieu let's get to it by answering the basics.

"How does the Hustle Bag work?"

It's simple. You have questions, we have answers. You send us questions you'd like answered, or even just comments you'd like to share, and we answer them here.

"How do I ask my questions?"

That's even simpler. All you have to do is tweet your question using the hash tag #HustleBag. You don't even have to mention us in the tweet, just use the #HustleBag hash tag and we'll see them and answer them in the Hustle Bag.

In that case, you're more than welcome to drop us questions in the comments section on the most recent Hustle Bag post, or shoot me an email at BryanMVance (at) Gmail.com. But seriously, it's 2013, if this lady is tweeting there is no excuse for you not to join the 21st century. It's not like twitter is addictive or anything.

Anything! Any questions. Serious. Not so serious. Downright strange. It doesn't matter. Ask away.

"What if you can't answer my question?"

Here at Hustle Belt, the master him self, Mr. Matt Sussman has put together a great team of passionate fans and experts from around the MAC. If I don't have an answer for one of your questions, one of the other members of Hustle Belt certainly will. We have experts in everything ranging from basketball to track & field. Oh, and general MACtion shenanigans.

Now let's move on. Since this is our initial Hustle Bag post, the questions were a bit hard to come by, and because I had some technical issues on my end with getting this post up which delayed the process, the initial tweets seem to have vanished in that time. But I do have two great questions to start off with:

"Will Akron (football) win more than one game this season?"

This is a tough one. Of course it's easy to rag on the Zips football program. Akron's last win against an FBS opponent came way back in 2010. Head coach Terry Bowden is entering his second season at the helm of the Zips and has his work cut out for him. This team is bad. There's no arguing that. Depth isn't there and the talent level isn't on par with the rest of the conference. Hell, UMASS beat the Akron last season for its only FBS win. The Zips are also without quarterback Dalton Williams, the main reason for them staying competitive in their games. The Stephen F. Austin transplant graduated

And the schedule this season isn't pretty. Akron opens it's season at UCF. The Zips get FCS level James Madison in week two, which should be a guaranteed victory for them. But after that it only goes downhill for the Zips. They play road games at Michigan (week three), at Bowling Green (week five), at Northern Illinois (week seven), at Miami (Ohio) (week eight) and at UMASS (week 12).

They also get home games against the UL-Lafayette Ragin' Cajuns (9-4 in 2012), Ohio (9-4), Ball State (9-4), Kent State (11-3) and Toledo (9-4). Needless to say Akron's schedule isn't helping its quest for a two-win season. They don't get to face a single MAC Michigan team (the three finished in the bottom of the MAC West last season, and will likely finish in a similar standing this season). The Zips also have to take on the top six MAC teams from a year ago, with only UMASS and Miami to cushion their conference schedule.

But all told, I do think Bowden will be able to lead the Zips to more than one victory this season. Likely coming against either Miami or UMASS. It won't be a pretty season, but Bowden knows what he's doing and will get the Zips to their best record in three seasons.

Which leads me into the second and final question of the initial Hustle Bag:

"Who would win a hot dog eating contest between the MAC football coaches?"

It saddens me that somehow the tweet that asked this has vanished, the person who asked deserves recognition. How great would it be to see a MACtion style hot dog eating competition? Broadcast live on a Tuesday night on ESPN2. That's ratings gold!

But if it were to ever happen, the easy pick would be Bowden. Just a glimpse at how his physique has changed over the past 20 or so seasons would lead many to jump to that answer.

There's no denying Bowden is a big boy. I'm fairly certain he can hold his own in any eating competition, but considering his past (he's spent the majority of his life in the south) something makes me think Bowden prefers good ole' BBQ over a hot dog.

P.J. Fleck, WMU's head man in charge, is a worthy competitor in his own right. At just 32 Fleck is the least removed from his college days, where many a young athlete has survived on hot dogs and ramen. Though something makes me think Fleck is more of a healthy eater than just about any other MAC football coach. I don't think he's living off Cheetos and Ballpark franks.

Speaking of franks, Ohio head coach Frank Solich benefits from sharing a common name with the hot dog. And he's known for being a fiery competitor. I wouldn't be surprised to see ''Fearless Frankie" put down some hot dogs in impressive style, but if you've ever seen Solich in person, you know he's no Kobayashi.

My personal choice to win is none other than EMU's Ron English. I mean how can you not pick a guy who could scare his competition into submission just by staring at them. I mean look at this stare: 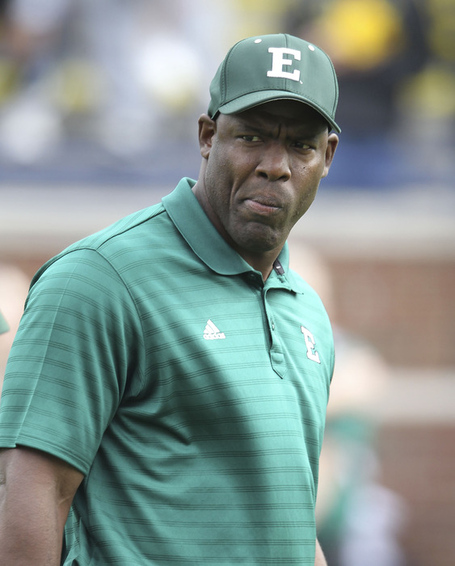 That's enough to make even Joey Chestnut's iron guts quit eating. Plus English will do just about anything if it earns his program some money. If there was a cash prize in this competition I have no doubt English would stop at nothing to glare his way to victory. He wouldn't even need to eat that many to win, he'd just scare all the other coaches off the stage before they could get their third dog down. The real question would be how English takes his Nathan's Famous. By looking at that no-nonsense glare I'd guess he's a plan dog kind of guy. I don't think we'd ever find him chowing down on one of these sloppy bad boys.

So there you have it folks, the first edition of Hustle Bag. As you bring in the questions, we'll continue to bring you the answers. So don't forget to tweet you're questions using the #HustleBag hash tag, or ask away on here.