Time to look at the 2013 MAC football season. We're going to preview the conference unit by unit, ranking the teams one through 13 at every position and facet we can think of. Now up: Schedules!

Last month, I posted this little gem. Go check it out, I'll wait. You back? Cool. By the way, I still can't find my game. I'm getting really mad. I mean, wher......[gets hit on the head].........sorry. Anyways, I wrote that and now that we are doing these positional rankings, Bryan came and begged me for my expertise.

"You've already parsed through the schedules," he said. "We need you. Put the team on yo back!" So I obliged. Here are your non-conference schedules, easiest to most difficult. /puts on helmet

Far and away the easiest schedule of the bunch. Their first 3 games see them play an FCS foe, perennial MAC whipping boy Army (no offense to our armed forces intended), and head to a weak North Texas team. After playing Toledo, they then face their toughest non-conference game with a road trip to Virginia, who were 4 points away from being a 2-10 team last season. Still, having an October non-conference game is always a plus, especially since you work into your schedule like the Cardinals will do.

Tyler Tettleton vs Terry Bridgewater. That'll be a fun game, but Ohio will be underdogs. They still could win though, and then have 3 very winnable games, with a slight test in Marshall. However, 3 home games make this schedule super easy. That Louisville game keeps them from having the easiest schedule though.

Jordan Lynch, undefeated quarterback? It could happen. After a season opening loss to Iowa last year, Lynch and Company get their shot at the Hawkeyes again in Week 1. This time, it is in Iowa. Should NIU win, they get a bye week to prepare for the Kibbie Dome. Seriously, remember Schmeideasdjladsjbush punting there 2 years ago? I digress. Idaho and EIU are easy wins before playing Darell Hazell and Purdue. Very winnable as this is the lower half of the B1G.

Howard to start the season should be a good confidence booster before hitting the road to play decent Penn State and Rutgers teams. Honestly, I'm not sure how to gauge Penn State this season. They went 8-4 last year, but lost to Ohio and Virginia and I'm not sure how much of the "Play for Joe" mentality is there. That campus rallied behind him and now we will really see what the Nittany Lions are made of. EMU gets a break in that they play Army after settling into the season a bit.

BGSU gets a big test this year when they face Tulsa right off the bat. That game should be your classic "Immovable Object vs Unstoppable Force" game. Then, they get Kent State before facing a poor Indiana team. Still, it is a B1G team. Murray State wraps up the September slate, but Mississippi State and the SEC await the Falcons in October. A difficult, but winnable schedule.

How does a schedule with back-to-back trips to Death Valley and Happy Valley rank 8th? Let me explain. First, Liberty works Kent into a rhythm. After the BGSU game, they play an LSU team that, while strong, isn't super-duper great. Then, then they get Penn State (see above). Finally, they get an easy South Alabama game in October. A little getaway game in the middle of the MAC schedule. So two easy wins, Penn State, and LSU. Feel free to begin hating.

Miami is the only team on the list with 4 FBS teams. No "cupcakes" here. Thing is, the only team that had a winning record last year was Cincinnati, and that'll be a home rivalry game after a bye week. Usually, playing an "American" team, a B1G team, and a SEC team would put you up near the top of the list. But when those teams (in order) are Cincy (under new coach Tommy Tubberville), Illinois (2-10), and Kentucky (2-10). This schedule is difficult, but given all the information, NIU, Ohio, Ball State, or Toledo could easily compete and possibly go 4-0 with it.

Seriously, how is Bobby Hauck still employed? I don't mean to knock anyone, but in 3 seasons at UNLV, he has records of 2-11, 2-10, and 2-11. That game, along with New Hampshire, is sandwiched between a trip to the Big House and NC State (after playing Toledo). Michigan is always difficult at home, especially when you add 100,000 fans to your normal atmosphere. NC State has shown promise, but now has a coach in Dave Doeren to build them up. In this sense, playing the Wolfpack later in the season hurts CMU, even with the only loss Doeren ever experienced in the MAC.

This is a tough mid-major schedule. Obviously Michigan is the main-stay, but with a road trip to George O'Leary's Golden Knights to kick off the season, that James Madison game will be huge for a win. To end this non-conference schedule is UL-Lafayette. The Ragin' Cajuns played well last year, nearly knocking off Florida. What makes this schedule more difficult than CMU's is the lack of non-AQs. Why? When you see an AQ team, you get more pumped to play them whereas playing UL-Lafayette isn't as exciting on first glance. I mean, who would you rather play for namesake: UCF or NC State? It's more challenging to play a tough (former C-USA) team than it is to play a weaker ACC team. Now let's bring back that Terry Bowden eating cajun food bombs picture. 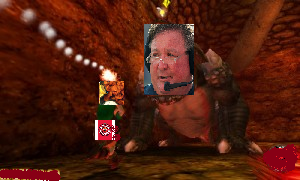 This was tough. I almost slotted Buffalo 3rd, but some battles lost out. Going to The Horseshoe is difficult, and Urban Meyer is running a clean powerful program. Braxton Miller is a Heisman candidate and OSU will be eyed as the team looking to knock off the SEC. Baylor is looking to bounce back in life without RGIII, and should be competitive in the Big 12 this year. After that, 2 home games over 3 weeks against beatable teams await the Bulls. UConn has lost to WMU in back-to-back years, and Buffalo will have a week to prepare to hand the Huskies another loss to a MAC school.

I originally had Toledo at 7, but 2 SEC teams > 1 SEC & 1 B1G or Michigan and anyone. Plus, Toledo's FCS team was the 2-seed in the FCS playoffs last year. So yeah, I'm content with this ranking. Florida looked stellar all year, until Terry Bridgewater ripped the Gators in the Sugar Bowl. Still, this is a very difficult team to play, and in "The Swamp" no less. Then, a trip to Mizzou and a familiar face in Gary Pinkell before getting that Eastern Washington Team at home. Finally, Navy in October should challenge the Rockets. Not much of a break at all.

Another tough one, but 2 home games is easier than 1. Wisconsin loses Montee Ball and Brett Bielema, Kansas State loses Colin Klein, and Vanderbilt hopes their own coach doesn't murder them. Lots of turnover leaves me with a few questions for this schedule. It is very difficult, as the 3 AQ teams went 28-12 last year with 2 of those losses in the Rose and Fiesta Bowls, but again, what are you getting this year?

3 road games against B1G opponents. Michigan State has always been competitive under Mark Dantonio, Northwestern has seemingly returned to the national picture, and Iowa will have 3 weeks to get their act together, and did beat NIU last year. Kinnick Stadium is a very tough place to play as those Iowa fans get ROWDY. Just go look up the Iowa City incident reports after every home game. And these teams don't lose much. MSU loses Le'Veon Bell but other than that, who is gone? Brutal way for P.J. Fleck to start his head coaching career.

/wimpers into the fetal position