Last year, Jeremy Guy selected 3 lucky fans for MAC home games he traveled to, where they were able to do a whole bunch of cool stuff during their favorite team's football game. He plans on doing this again.

Jeremy Guy wants to do the Experience MAC Road Tour again. If you don't know what it is, JGuy goes to just about every MAC football stadium, selecting 3 fans (apply online) to live out the role of a journalist during the game.

You all remember his twitter rant, right? Well he wants to do this again, but he's not quite sure how he wants to set it up. Last year was a hit and he wants this year to be even better!

It seems like everybody wants their friend to tag along, but he wants you to put your input on this!

If you didn't go last year for whatever reason or are just now hearing about it and probably on the fence over it, I highly recommend you go. I went last year for the EMU vs. Army game at Rynearson Stadium. Hung out in the [warm] press box, went on the track near the field, took some pictures, ate some Jimmy John's, tweeted from the @ExperienceMAC account and was able to meet Warrick Dunn. JGuy even gave us the hookup a few months later to go to Ford Field in Detroit, MI and watch the MAC Championship game for free. No joke. We received media passes and everything. I remember watching the second half and the overtime thriller with a couple NFL scouts for the Colts and Broncos (the Vikings scout didn't show up. Thanks for the seat). 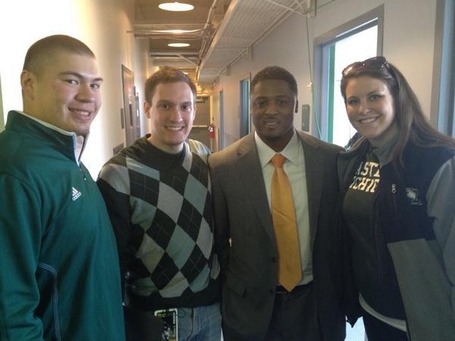 The other two in this are EMU alumni Lance Vought & Marissa McNees. I want to point out that they weren't undergrad students like I was/am, but they've already graduated and still wanted to do this. So don't be discouraged if you're not a student at the school you root for, you can still apply!

Anyways, please let your voices be heard. Let JGuy know what you think should be done to make his second go-round at this.

What other conference does this for their fans?