The former Ohio Bobcat, and one of the greatest mid-major point guards in NCAA history has opted to play in Greece.

Share All sharing options for: D.J. Cooper To Play Professionally In Greece

D.J. Cooper is heading to Greece.

Cooper's agent confirmed to Hustle Belt Monday that the former Ohio point guard has reached a one-year deal with P.O.A.K. B.C., a professional basketball club in the Greek Basketball League which also competes in the Eurocup. The team is located in Thessaloniki, Greece. Cooper is set to join the them next week.

Excited and ready! Can't wait to get to Greece and play for @Paokbasketball

So Long D.J. Cooper, Ohio Loses to Denver, Ending A Legendary Career in the Process 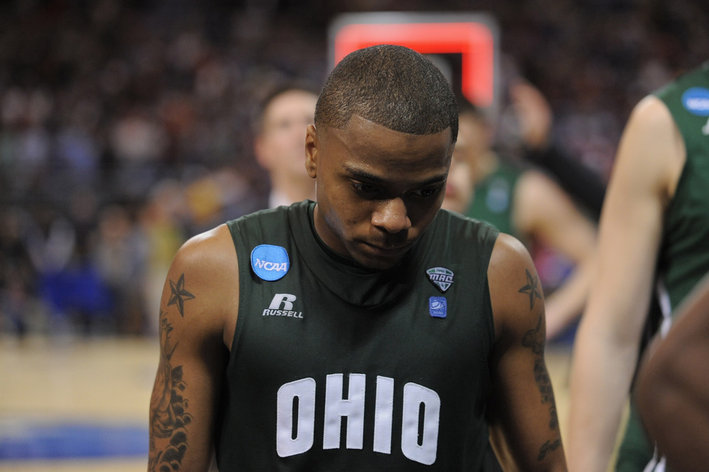 In the opening round of the NIT, Ohio lost to Denver 61-57, ending the run of the most successful senior class in Ohio history and the career of a legend, D.J. Cooper.

During his four season's at Ohio Cooper built up a resume that few in college have ever seen. The undersized point guard led the 'Cats to an upset of Georgetown in his freshman season, and took them all the way to the Sweet 16 in his junior year. By the time Cooper's career came to an end he stood alone in the NCAA record books. Arguably the greatest player in Bobcats history, and certainly one of the best in Mid-American Conference History, Cooper's natural passing ability wasn't enough to get him drafted by an NBA team.

He attempted to work his way onto a roster, playing in both the Orlando and Las Vegas summer leagues. But when it came down to it the offers this father of a less-than year-old child was looking for just weren't there.

"Cooper turned down an opportunity to join the New York Knicks, which could not offer enough of a financial guarantee in order to tip the scales in their favor," wrote Cooper's agent Mike Naiditch via email.

Now Cooper is heading to Europe, where two of his former teammates Ivo Baltic (Croatia) and Reggie Keely (Netherlands) are currently playing. P.O.A.K. B.C. is a historically successful European team having won several Greek Championships and Cups in the mid-90s when Peja Stojakovic and Scott Stiles played for the club.

Cooper is already listed as the team's starting point guard on Eurobasket.com. The team's season is set to begin in early October.

One has to think that Cooper opting for a one-year deal is a sign that the Chicago native is determined on making his way into the NBA. But in order to do that Cooper will need to have a stellar season and work on some flaws in his game, like his tendency to take ridiculous three-pointers. But there's no denying that Cooper has NBA-level passing ability. Greece better get ready for some jaw-dropping dimes, because Cooper can do this type of stuff anywhere.

D.J. Cooper's road to the NBA