Time to look at the 2013 MAC football season. We're going to preview the conference unit by unit, ranking the teams one through 13 at every position and facet we can think of. Up next? The running backs.

Defenses of the Mid-American Conference Beware. Handoffs will be a-plenty this fall as the tailbacks in the conference as a group might be the best in the MAC's history. Sure, college football is becoming more spread-dominant with pass-happy offensives, but with the talent in the backfield this year the MAC will most definitely be known for it's smash mouth running games.

13. Massachusetts (Last Year 12) - Michael Cox rushed for 710 yards and five scores in 2012 which was good enough to get him drafted in the seventh round by the Giants in the NFL Draft. The Minutemen's next best back last year had only 138 yards. Jordan Broadnax will probably head up the rushing effort for the Minutemen and he has big shoes to fill.

12. Miami (Last Year 13) - The RedHawks didn't have a running back finish in the Top 20 in the MAC. In fact their leading rusher was Jamire Westbrook who finished 25th in the conference with 361 yards. That means there were 19 running backs, four quarterbacks and one receiver to rush for more yards than any Miami back. Westbrook is back this season along with Spencer Treadwell who added 234 yards on the ground last season.

10. Northern Illinois (Last Year: 8) - If we could count Jordan Lynch as a running back, the Huskies would be giving Kent a run for their money. Lynch led the MAC in rushing yards last year but their next leading rusher, Leighton Settle, graduated. Settle finished 18th in the MAC and right behind him at 19 was Akeem Daniels who does return after a 447 yard season. Northern is going to be quite alright regardless of where they're ranked at the running back position.

9. Western Michigan (Last Year: 9) - It probably wouldn't surprise anyone if P.J. Fleck decided that he was gonna hit the field and play running back himself. But luckily for the first-year coach he gets his leading rusher, Dareyon Chance, back for his senior year. Chance was the MAC's tenth best back in 2012, but with Tyler Van Tubbergen fully taking over the reins at quarterback, Western could go back to launching the aerial assault they wanted to with Alex Carder.

8. Akron (Last Year: 7) - Jawon Chisholm will be the shining star Terry Bowden will use to turn the Zips program around the next two seasons. A bruising runner, Chisholm racked up 953 yards last year, making him the eight returning leading rusher in the conference. Akron also has St. Xavier product Conor Hundley for a change of pace.

7. Eastern Michigan (Last Year: 3) - Bronson Hill returns as the Eagles best option for any success in 2013. Especially with Alex Gillett graduating. Eastern will rely on Hill to add to his breakout 905 yards and six touchdowns in 2012 to be the offensive leader Ron English and the boys need to keep building.

6. Toledo (Last Year: 11) - The Rockets amassed 3,276 yards through the air behind probably-half-decent MLB left-handed pitcher Terrance Owens and company, but still managed to grind 1,498 yards out of their workhorse back,David Fluellen. If it weren't for the fact that Owens and Toledo's top two receivers (Bernard Reedy and Alonzo Russell) return for the Rocket's O this year, Fluellen would be ranked much higher.

5. Ball State (Last Year: 4 )- The story for the Cardinals in 2013 will be their passing game. Keith Wenning has the potential to lead the MAC in passing yardage, but that won't stop Jahwan Edwards from getting his. He tallied over 1,400 yards last season and found the end zone 14 times. His 5' 10", 225 pound frame is also perfect for adding a physical aspect to their pass attack. Oh yeah, they have Horactio Banks who rushed for 586 yards last year, too. 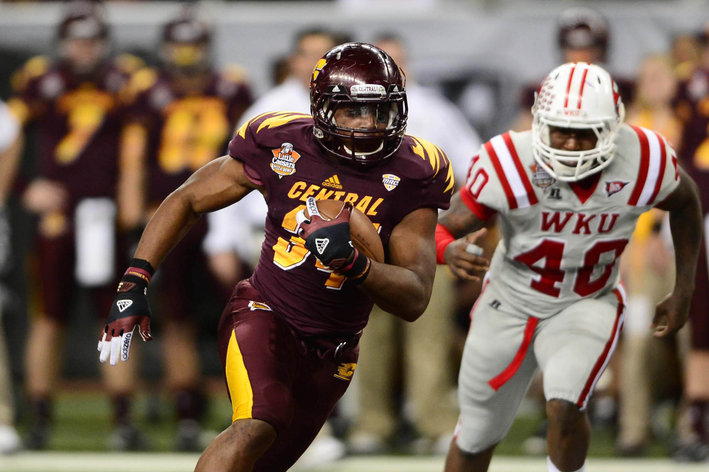 Possibly the best name in the MAC, and also one of the best running backs in the MAC, Zurlon Tiptons returns to CMU after nearly 1,500 yards, and 19 touchdowns.

3. Ohio (Last Year: 5) - The fact that Tyler Tettleton can throw for 2,844 yards in 2012 with Beau Blankenship still being able to collect his menial 1,604 yards means good things for the Bobcats offense in 2013. Blankenship's transfer from Iowa State has been a godsend for Frank Solich's offense. If Ryan Boykin and Daz Patterson can shake off past injuries, the 'Cats can ease the load off Blankenship a bit.

2. Buffalo (Last Year: 1) - If it weren't for the double trouble at Kent, Branden Oliver would for sure have the Bulls in the No. 1 spot. After three seasons, 556 carries, 2,514 yards and 18 touchdowns Oliver has been touted as one of the best running backs in the upcoming draft class. With Buffalo's wishy-washy situation at quarterback, Oliver will hold the reigns on offense, which he proved he is capable of in 2011 where he toted the rock an amazing 306 times. If 300-plus carries aren't in the cards for Oliver, Coach Quinn has the option of going with Devin Campbell who rushed for 502 yards last year.

1. Kent State (Last Year: 6) - Two-Headed Monster. Thunder and Lightning. Smash and Dash. Call them what you want, but the Golden Flashes get both Dri Archer and Trayion Durham in a backfield that doesn't return a quarterback. Kent won't have to worry about overworking one back as they settle in a play caller because they have two thousand-yard running backs to get the job done. Archer is the jack of all trades who led the team in rushing, receiving and kickoff return yardage compiling 2,601 all-purpose yards and 24 total touchdowns. Durham packs a punch racking up 1,316 yards and 14 scores on the ground in 2012.