Time to look at the 2013 MAC football season. We're going to preview the conference unit by unit, ranking the teams one through 13 at every position and facet we can think of. Up next? The big fellas upfront.

Last season the Mid-American Conference boasted some of the most experienced offensive lines in the country, and it showed. But most of that experience graduated, and now many of the teams in the MAC are in the process of rebuilding and piecing together new lines. It's time to give the big fellas some attention.

13. Western Michigan (Last season No. 4) — There's no other way to say it then this: The Broncos offensive line looks bad heading into the 2013 season. They lost four starters at the end of last season, and things have only gotten worse since then, with returning starting center Terry Davisson out for the season. All told Western Michigan is replacing five starters and 120 career starts. A meager five career starts return on what will be one of the least experienced offensive lines in the entire nation.

12. Massachusetts (Last season No. 8) — The Minutemen were actually one of the more experienced line's heading into last season, but didn't play all to well. They struggled to open holes all season, and now must replace three three-year starters and 94 total starts between them. It's a huge gap to make up, especially since of the 31 returning starts, right tackle Anthony Dima accounts for 20 of them. The line is young, and can develop into a strength for UMass in the future, but it won't be this year.

11. Akron (Last season No. 13) — Akron lost three starters (60 combined starts overall) from last season, so why the increase? Well factoring in other team's losses and the fact that the Zips weren't all that terrible in pass protection last season makes up for the fact that only 33 career starts are returning for Terry Bowden this fall. Expect them to improve slightly, despite being relatively inexperienced.

10. Miami (Last season No. 12) — This line was horrible in 2011, and didn't fare much better in 2012. Despite that, and despite losing three starters with a combined 97 starts between them, they actually take step up in our rankings this season. Though not really because of their own doing. They do get back their entire left side of the line (center included) which has a combined 78 starts between them. This line has potential, but it's unlikely they become one of the better groups this season. 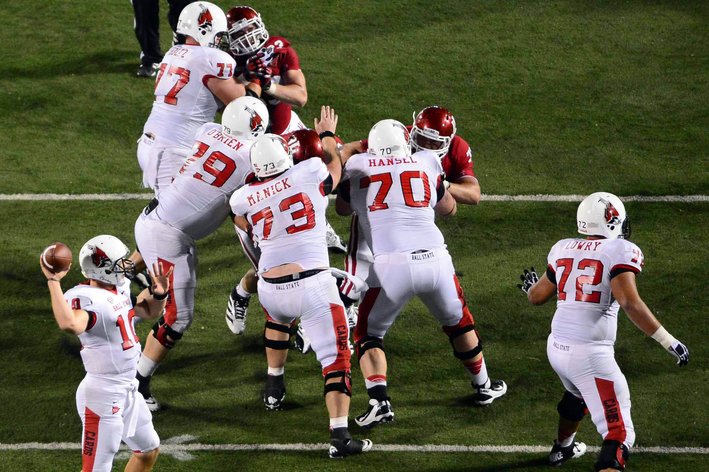 In the words of Mugatu from Zoolander, "That Hansel is so hot right now."

9. Ball State (Last season No. 2) — Last season the Cardinals' offensive line was the most experienced group in the nation. But four starters are gone, including two All-MAC lineman, and Ball State lost an astonishing 142 career starts in that group. Somehow Pete Lembo and company has to find away to make up for that and protect Keith Wenning. Though they have some talented members coming back, there are only five career starts between them and the line is full of incoming freshman. They do get back All-MAC right guard Jordan Hansel, but this is the one area of concern in an otherwise flawless offense.

8. Central Michigan (Last season No. 5) — We all know how talented the Chippewas offensive line unit was last season. There's no point in even getting into it. But even with all that talent upfront, the offense struggled. Now with 124 career starts and three starters out the door, CMU is going to have to build that line back up and quick if it want's Zurlon Tipton to be able to maximize his potential. They get back left guard Andy Phillips (18 career starts) and center Nick Beamish (13 career starts) but are otherwise lacking experience entirely and incredibly young.

7. Eastern Michigan (Last season No. 3) — Despite having a solid, experienced line last year with proven production returning in 2012 the offensive front struggled this past season. The team slipped from 14th in the nation in rushing in 2011 to 60th, despite having an explosive back like Bronson Hill in the backfield. Now the Eagles must make up for the loss of three starters (100 starts between them). They do get back two multi-year starters on the right side, but the line overall is another weak point for an Eastern Michigan team full of weak points.

6. Buffalo (Last season No. 7) — Before our friends at Bull Run get mad at me, let me explain. The line was solid last year, though sometimes lacking in pass protection. But the Bulls lose two multi-year starters, and the groups ahead of them just performed much better and return better talent. They do get three starters and 72 total starts back, and were solid in the run game last year, so don't be surprised if they perform better than this ranking. But they need to prove that first.

5. Ohio (Last season No. 1) — The Bobcats were powered by one of the best lines in the conference last season. It paved the way for the 9th leading rusher in the nation and the 27th overall rushing attack. But the 'Cats lost a ton of experience (105 starts between the three missing starters) including the conference's most experienced lineman (Eric Herman). They also allowed 28 sacks, which isn't horrible, but isn't great either. Only two starters return, but surprisingly there's a decent amount of experience back (57 combined starts). Ohio's offensive line won't be as dominant as it was last season, but it shouldn't be too far off either.

4. Kent State (Last season No. 9) — The Golden Flashes were one of the best ground attack teams in the nation last year, due in large part to the thunder and lightening duo of Dri Archer and Trayion Durham, but also thanks to a formidable line. They do lose three multi-year starters (two All-MAC lineman), but get back a pair of multi-year starters as well in center Phil Huff and Pat McShane. The argument can be made they shouldn't be this high, with four players returning with starting experience, and good amount of size, this group shouldn't have too terrible of a drop off in production from a year ago.

No. 3 Bowling Green (Last season No. 6) — Despite the Falcons' offensive woes last season, this line actually performed splendidly. They only allowed Matt Schilz to get sacked 13 times, an astonishingly low number. They did lose three-year starter and All-MAC right tackle Jordan Roussos, but get All-MAC left guard Dominc Flewellyn back (a three-year starter himself). Overall this offensive line returns four starters and is one of the more experienced groups in the MAC. Oh and size is definitely not an issue. The Falcon's smallest offensive lineman is listed at 6-foot-7, 281 pounds. They'll be just fine. 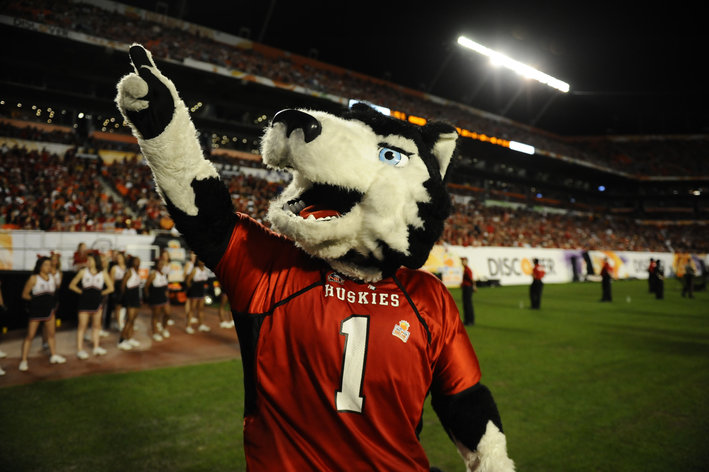 No. 2 Northern Illinois (Last season No. 10) — Last season's most inexperienced line becomes this years most experienced. All five starts that paved the way for the Huskies to hold claim to the 12th best rushing offense in the nation last season are back. That includes All-MAC left tackle Tyler Loos (No. 16 on our countdown of the Top 68 returning MAC football players, in case if you were wondering). This group is solid all-around. Both in pass and run blocking. Of course having someone as unstoppable as Jordan Lynch behind you doesn't hurt, but still these hog mollies are good, but not the best in the MAC, that title goes to...

No. 1 Toledo (Last season No. 11) — Instead of going on and on about how skilled and deep this group is let me have SB Nation's Bill Connelly do it instead:

From his 2013 Toledo season preview in March:

At this point, one could almost make the case that experience on the offensive line doesn't matter as much as having a great line coach. Certain coaches seem to milk quality play out of their lines no matter who returns, and let's just say that 29-year-old OL coach Tom Manning acquitted himself really, really well last fall. In 2012, Toledo returned just two starters from a line that had played at a really high level, and the line arguably played at as high a level, or higher. The Rockets were fantastic in setting up opportunities for their backs and avoided negative plays. Meanwhile, they protected two different quarterbacks well in passing downs situations. Despite decent size, this was not a line built to succeed in power situations, but this was a strong unit overall.

And now it returns four starters and 78 career starts in 2013. And it can probably expect to return another four starters in 2014.