Time to look at the 2013 MAC football season. We're going to preview the conference unit by unit, ranking the teams one through 13 at every position and facet we can think of. Up next? The defenses.

The Mid-American Conference is known for its high-octane offenses, but there's also some solid defensive play going on around the conference. Rather than trying to break each defensive unit down individually, we're going to rank each team based off their entire defensive unit.

13. Eastern Michigan — Statistically the Eagles were the worst defense in the MAC last season. They were out gained by nearly 1900 yards, and were 12th in the MAC in scoring defense and 13th in total defense. There was absolutely no pass rush from this team. All told, Eastern Michigan notched just seven sacks as a team. That's barely half a sack a game. Oh and the team lost all three of their starting linebackers.

12. Massachusetts — As intimidating as it is to play in a nearly empty Gillete Stadium (too harsh?) the University of Massachusetts Minutemen come into the year looking to cut down on the 40.2 points per game allowed against MAC competition in 2012. The Minutemen lost leading tackler, and sack man Perry McIntyre who was a first-team All-MAC selection. They also lost both starting defensive tackles from 2012. The secondary is likely to be the one strong point on this defense. This defense should improve from last year, but still has a long way to go.

11. Central Michigan — After falling from grace in the post Dan LeFevour era, the Central Michigan Chippewas are trying to right the ship. Shamari Benton and Justin Cherocci return as run-stuffers and versatile ‘backers, accounting for nearly 260 tackles. Good news for Dan Enos’ defense. Bad news for this group: They were 102nd or worse in every major advanced defensive statistic for 2012. Unless Zurlon Tipton can line up on the defensive side of the ball too, this defense won't amount to much.

10. Akron — As anxious as we are to watch this Akron defense return to action against the MAC’s finest, opponents stand a pretty good chance to put some digits on the scoreboard when facing the Zips.  Akron brings back seven defensive starters, namely Malachi Freeman at corner. They must incur the loss of J.D. Griggs who led the team in sacks with six, and Kurt Mangum who led the squad in tackles. But Griggs is the only main loss from the defensive line, and Terry Bowden did land Florida State transfer Moses McCray who should help up front, if healthy. 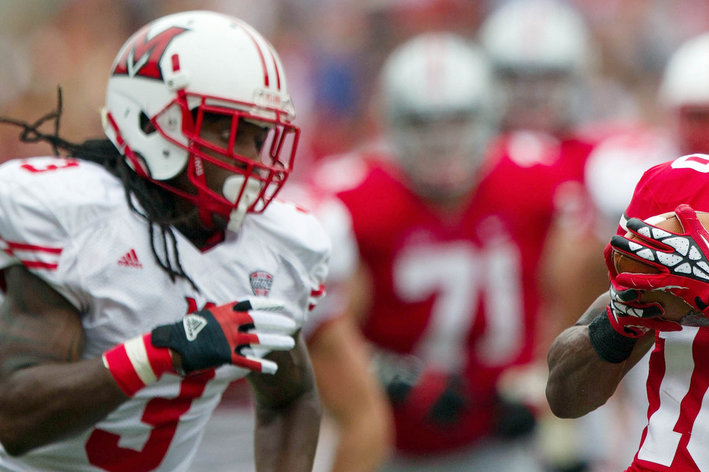 Dayonne Nunley checked in as our No. 9 player in the MAC.

9. Miami — Dayonne Nunley returns as the star of Miami's defense, and has appeared on the radar of NFL scouts for the last few seasons. He’ll lead a group of ball hawks looking to improve their standing as a bottom of the rung MAC defense. Chris Wade at linebacker led the ‘Hawks with 128 tackles in 2012 and will look for help from senior lineman Austin Brown, who missed the last 10 games of 2012. These two will be big cogs in an attempt to improve upon the 12th ranked MAC run defense from a year ago.

8. Ball State — People around the MAC know about Pete Lembo and the job he has done with Ball State in two short years, and they sure know about that high-scoring offense. But, as the Cardinals average to 33.6 points on the board per game, they also yielded 32 a game in 2012. Lembo has made some changes to his defensive staff, and with a D-Line that features Jonathan Newsome and Nathan Ollie, Ball State stands to improve upon their less than average defense, even after losing all three starting linebackers.

7. Western Michigan — Baby-faced first-year coach P.J. Fleck brings some excitement to Kalamazoo, as Western Michigan looks to become relevant in the MAC again. Johnnie Simon stars at strong safety, having collected over 100 tackles each of the last two seasons. The Broncos also return nearly their entire secondary and their top four linebackers. The team is transitioning to a 4-3, so there could be some growing pains, especially up front. But maybe Fleck can sell his line into over-achieving this season.

6. Kent State — Step aside Kent State running backs, and give the Golden Flashes' defense some attention. In the defensive backfield, Luke Wallot returns after having third, and second team All-MAC performances in the last two years respectively. A second ranked (MAC) run defense and a surprisingly pedestrian 12th ranked (also MAC) pass defense left them in the middle of the pack defensively in 2012. But with mini, but mighty defensive tackle Roosevelt Nix leading up the defensive front for his final season, there should be improvement in a flash, I say.

5. Ohio — The Bobcats sustained enough injuries in 2012 to make Wylie Coyote blush. Both starting corner backs were out for the season by the end of the Penn State game, and things only got worse from there. But now with a wealth of experience the Bobcats defense will be looking to see improvements all around, even with losses on the front line and within the linebacking corps. Ohio returns seven starters on the defensive side of the ball from last season. Linebacker Keith Moore and corner back Travis Carrie (who missed all of last season with injury) anchor a defense that despite its woes in 2012 wound up being the fourth best defense in the conference statistically.

4. Toledo — For all of the returning weapons the Rockets ave on the offensive side of the ball, there's a lot of missing depth defensively. Both starting safeties are gone, as well as their two leading linebackers and four of their top six defensive lineman. Not all is lost though. Starting corner Cheatham Norris (I mean, come on, you can’t be bad with a name like that) protects well against the deep ball, and Trent Voss will attempt to hold down a group of linebackers that will want for skill after the losses of Robert Bell and Dan Molls who combined for 266 tackles a year ago. And if the way Toledo has been dominating recruiting in the MAC has any sort of carryover on the field, there will be plenty of newcomers to fill in the gaps. Toledo employed a bend but don't break style of defense in 2012, so they might not look pretty, but it's going to be hard to score on them.

Khalil Mack is a badass.

3. Buffalo — The team was pretty much average when it came to their defense last year, but one might expect to see modest gains for the SUNY Bulls. They were second best in the MAC in yardage allowed, but stand to improve in scoring defense. Big Colby Way is one of the better down linemen in the MAC, and Najja Johnson anchors a loaded secondary. But there's really one two words needed to explain why Buffalo's defense is so good: Khalil Mack

2. Northern Illinois — Hey, for all the clout the offense gets, the Huskies can play some defense too! Knowing full well that they’re losing part of a coaching staff that led them to a MAC championship last season (with Rod Carey taking the helms in DeKalb), NIU still stand to have one of the best defenses in the MAC. Jimmie Ward and Joe Windsor return for senior seasons as anchors of a defense that will try to lead the Huskies to a third straight MAC championship.

1. Bowling Green — The BGSU defense in 2012 was undoubtedly the best in the Mid-American Conference, and that shouldn't change in the upcoming season.  The Falcons were like an oppressive orange flock that swarmed their pray all year long, yielding just 16.8 points per game. A couple of biggun’s (defensive linemen of course) have taken flight from BG, namely Chris Jones, but the Falcons figure to move forward with several other All-MAC performers, including a guy known as BooBoo.