After getting destroyed literally and figuratively last week at Michigan, Central Michigan faces a tough test in their home opener.

Share All sharing options for: CMU vs New Hampshire Preview

Things could not have gone any worse last week for Central Michigan in the season opener against Michigan. Even worse than the fact that the Chippewas were blown out 59-9 was that they lost their two most important players on offense, running back Zurlon Tipton, and quarterback Cody Kater. News came down today that Tipton has had surgery on his ankle, and is out for the remainder of the year. Kater, nursing a broken clavicle, remains questionable as to whether he will return to the field this season.

All of that out of the way, the Chippewas still have to play a game this week, and usually the CMU home opener is against an FCS patsy so they can work out the kinks. Well, they at least have the FCS part right, because making the journey to Kelly/Shorts Stadium this weekend is FCS power New Hampshire. And based on what FCS teams did to D-1 teams last week, the Wildcats will be motivated to do the same.

Since many of you have no idea what New Hampshire football is all about, let's give you a bit of an overview of the entire program. Last season, the Wildcats were the Colonial Athletic Association co-Champions, and came into this season ranked No. 8 in the FCS preseason polls. They have since dropped to 11th despite not playing a game. The Wildcats also boast two of the most impressive streaks in FCS football: Nine straight FCS Playoff appearances, the longest active streak in FCS, and they have been ranked in the Top 25 of the FCS polls for 126 consecutive weeks, a streak that goes all the way back to 2004.

What makes the Wildcats such a dangerous team is that they are an offensive juggernaut. Last year they averaged over 34 points per game, and just over 450 yards per game on offense. And making matters worse for CMU, the Wildcats return eight starters on the offensive side of the ball, including their top running back, and wide receiver from a year ago.

Starting at QB this year for New Hampshire is sophomore Andy Vailas who had 18 touchdown passes last year, and only three interceptions. He was also the third leading rusher on a team that finish 15th in the FCS in rushing. Running back Nico Steriti is the leading rusher from last year, he had 921 yards and nine touchdowns a season ago. And the big threat in the Wildcat passing game is R.J. Harris, who last year had 84 catches, over 1,000 yards, and nine touchdowns.

Needless to say, after giving up 59 points to Michigan, things don't get much easier for CMU in their home opener. 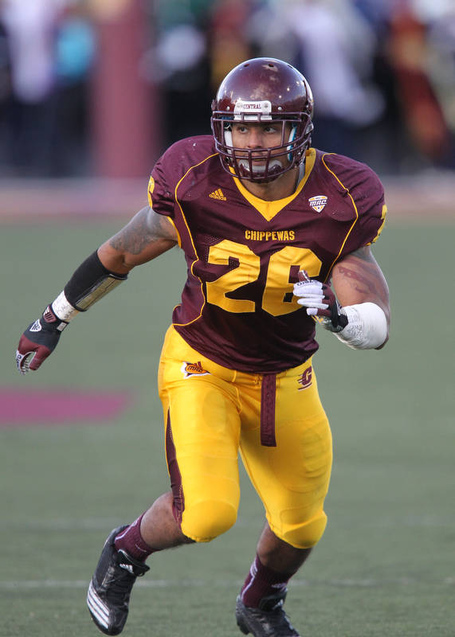 CMU needs to correct plenty of mistakes from the opening week loss. The offensive line looked lost against the blitz last week, and it resulted in one broken clavicle, and this weeks starter, Alex Niznak, running for his life more than once. Even without the pressure, Niznak did not look comfortable in his first D-1 football action, going just 11-22 for 131 yards and an interception. Not to mention the defense, which despite forcing three turnovers last week, was still gashed for over 450 yards of total offense, particularly on the ground where they gave up over 200 yards rushing.

So what does CMU need to do this week to get a win? The first thing is establish some sort of offense. The Chippewas had a few decent drives and scoring chances last week, but when you are forced to settle for field goals instead of touchdowns, you aren't going to win many games. Second, Niznak, and the running back committee need to step up and try to replace the players who were lost. If the competition between Niznak and Kater was as close as Enos said it was all preseason, then the Chippewas should be OK at the quarterback spot. But you don't just replace a 1,500 yard rusher and his 19 touchdowns. Saylor Lavalli will be the starting running back with Tipton out for the year, but Anthony Garland should see a few carries as well. Finally, the CMU defense needs to show some sort of ability to get a stop. Even with the three turnovers, they gave up a tons of yards, and didn't force a punt until garbage time in the fourth quarter. Against a very good New Hampshire offense, and a team close to the caliber of MAC schools they'll be playing later in the year, this is a good early barometer of what to expect from the defensive unit the rest of the year.

Just because this is an FCS team that 90% of Chippewa fans have never heard of doesn't mean this is going to be an easy game. In fact, expect this to be like a MAC game, lots of scoring, very few stops, and a close game that could be decided on a wild play.

Kickoff is set for 3pm on Saturday, and the game will be shown on ESPN3.