College Football Recruiting: Where Do MAC Football Players Come From?

No, these aren't spotty cellphone coverage maps you're looking at, this is a breakdown of where MAC football players come from.

Share All sharing options for: College Football Recruiting: Where Do MAC Football Players Come From?

Recruiting is the foundation of every football program. Every conference championship won began in the living room of some high school junior or senior. For some schools—the old blood football schools, the ones located all alone in the middle of a football hotspot—recruiting comes easier, and therefore leads to more sustained longterm success. But for small schools; mid-major schools; Mid-American Conference Schools, recruiting takes a bit more creativity.

With many of the MAC schools located directly in the footprint of larger B1G schools it can be hard to get high-quality football players out of your own backyard. But, have you ever wondered exactly where your team recruits the hardest; where the members that make up your team actually call home? Benn Stancil of ModeAnalytics.com dug into the data and compiled maps breaking down where the members of every FBS football team call home. The results are equal parts interesting and beautiful. 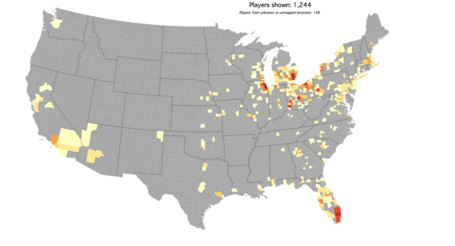 When it comes to the MAC as a whole, unsurprisingly the majority of the players come from the Ohio/Michigan area, or from the football hotbeds of Los Angeles and South Florida. Cook County, Ill. (where Chicago is located) is actually home to the most MAC players, accounting for 58 players. What is telling though is the overall lack of players from Texas, widely considered one of the richest high-school football talent pools. (click on the photo to enlarge). 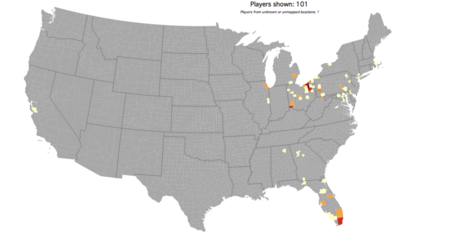 Terry Bowden's recruiting classes at Akron haven't been great on paper, and the map shows why. Akron rarely recruits players outside of the heavily poached Northeastern Ohio area. Cuyahoga, Summit and Stark counties account for just under 20 percent of the total roster. Outside of Ohio, Miami-Dade Country, Fla. is the only location where the Zips have at least four players. Even more interesting, Akron seems to have a lot of success in Hamilton County, Ohio, right in the backyard of Miami University.

Ball State's players are the creations of the mad scientist himself, Dr. Lembo; hailing from that mysterious region "Parts Unknown". In other words, there's no data for Ball State. Sorry Chirpies and Chirpetes. 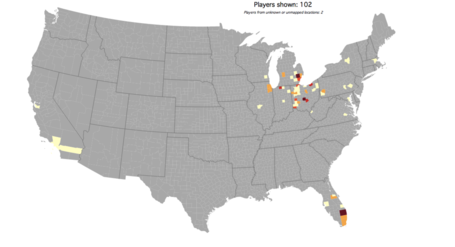 Bowling Green's recruiting footprint is much more scattered. While still predominately located in the Mid-West, the Falcons come from all over the state of Ohio, but also have a fair chunk of players form Michigan and Indiana. But, the place most Falcons call home is actually sunny Palm Beach County, Fla. with Detroit and Columbus coming in as a close No. 2. 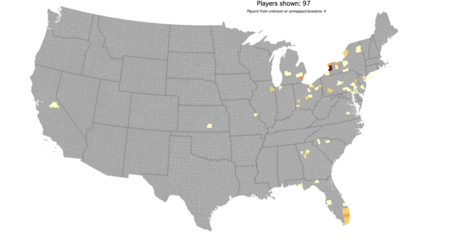 Being an outlier of the conference can pose problems, but in the recruiting trail it can actually be a benefit. Being located away from the other schools means you have an area not being encroached on by your fellow conference members. For Buffalo this is exactly the case. The Bulls, located in Western New York, rarely dip into Ohio and Michigan, instead they pull a large chunk of their talent out of their own backyard. Erie, Niagara and Monroe counties in New York are home to the most Bulls. The Detroit area and South Florida are two popular recruiting areas for Buffalo as well. 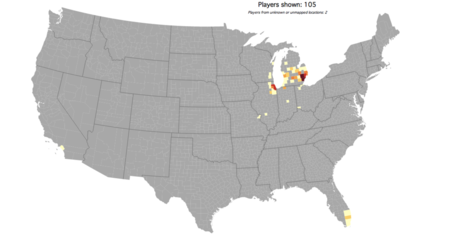 Located between Chicago and Detroit, Dan Enos' CMU recruiting classes primarily call those two major population hubs home. The Chips have the densest recruiting pool, in that they have just one player west of the Mississippi, and few outside of the Great Lakes region. Wayne, Oakland and Monroe counties in Michigan account for one-third of the team's roster. 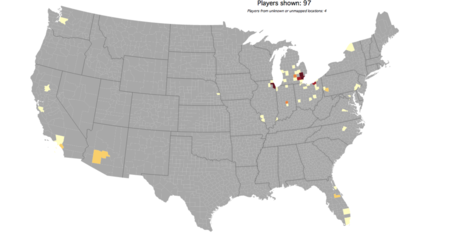 Located right down the road from a B1G school can make recruiting a nightmare. But EMU actually does a decent job of snatching up talent from the Detroit metro area. Chicago is another popular home base for Eagles, and besides that EMU's recruiting pool is actually quite sporadic. Players hail from as far away as Seattle and Miami. 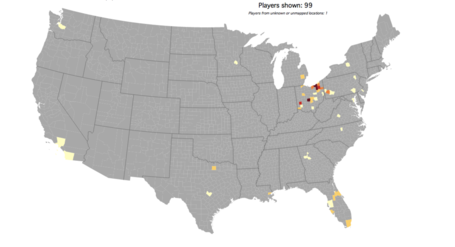 The Golden Flashes are primarily Ohioans; even more so than their next door neighbors, Akron. More than one-third of Kent State's players call Cuyahoga, Summit, Portage, Franklin and Montgomery counties home. Just 32 players hail from outside the Buckeye State 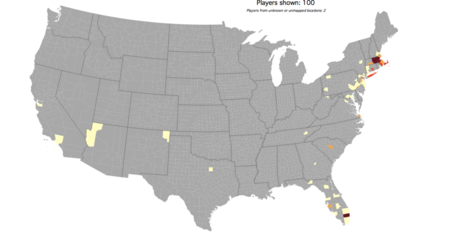 UMass is even more of a geographic outlier than Buffalo, and the map shows it. A large chunk of Minutemen hail from Massachusetts, so it appears Charley Molnar's "Made In Massachusetts" plan was working. New England is where the majority of UMass' players come from, which could be a huge benefit for the school if it can start winning. MAC schools don't recruit out there, and with only a handful of FBS schools in the Northeast, the competition level up there for recruits isn't that high. It's no wonder the Minutemen were able to get NFL caliber players as an FCS school with a natural geographic monopoly baked in. 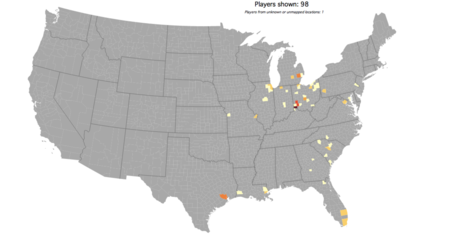 Don Treadwell had a lot of flaws, and while some might say he could have recruiting Southwestern Ohio better, it appears he was actually doing a good job of it. Twenty-nine players hail from Cincinnati and its surrounding counties. The 15 'Hawks come from Hamilton County alone. The 'Hawks are also one of the few MAC teams who have ventured into the vast land of Texas, with four players hailing from the Houston area. 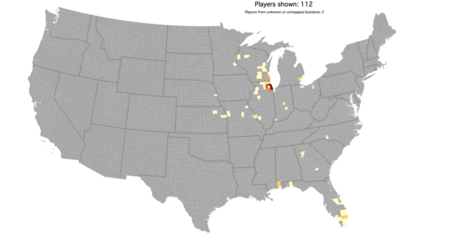 One of the perks of being the most dominate school in the state of Illinois is getting to own the Chicagoland area in terms of recruiting. The Huskies have primarily come from upper Northeast Illinois, with one-third of those players coming from Cook County alone. Outside of Illinois however, NIU doesn't do a phenomenal job. Whether that be from a lack of venturing out due to success in Illinois, or just not having success there really aren't many Huskies from other parts of the country. 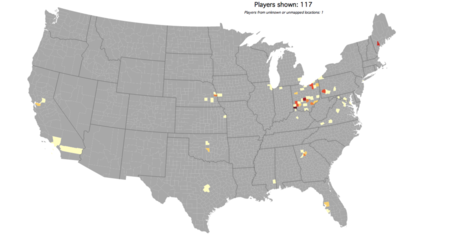 Frank Solich's recruiting ties to the Great Plains have long been a point of pride amongst Ohio fans, but according to this data, the wells may be drying up. Just six players on the 'Cats 2013 roster came from the great state of Nebraska, where Solich spent more than one quarter of a century coaching. Like most of the Ohio MAC schools, the state of Ohio is the primary source of talent for the Bobcats. 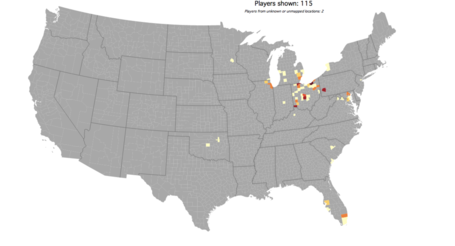 Holy Toledo, the Rockets don't hit a lot of areas, but where they do go, they bring back a decent chunk of players. Toledo's four main sources hail from for separate areas in the state of Ohio. Pennsylvania, Chicago and South Florida are also popular abodes for the Rockets. 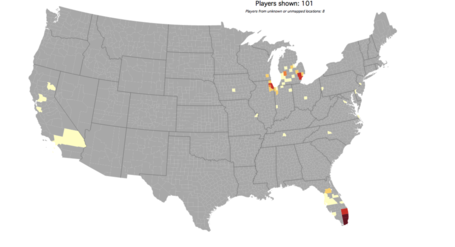 This data reflects the pre-P.J. Fleck recruiting classes, so it will be interesting to note the differences come next season, but the Broncos DOMINATE in South Florida. One-third of the Broncos roster hails from Palm Beach, Miami-Dade and Broward counties. Another 10 players come from various counties around the Sunshine State. But all that time on the beaches of Florida doesn't mean WMU isn't tapping the Michigan talent wells. Ten players come from the Detroit area, with more scattered around the state. Chicago is also a popular dwelling spot, with five current Broncos coming from the windy city.

(All photos are screenshots of the actual maps. Check out the original post, and maps for all the Division I [FBS & FCS] schools at ModeAnalytics.com)