Share All sharing options for: 2014 MAC Men's Basketball Tournament: The Field Is Set

The 2014 Mid-American Conference men's basketball regular season came to an end Saturday evening, setting the table for the 2014 MAC Tournament in the process.

Entering Saturday we already knew the Top 4 seeds in the tournament  thanks to Friday night's hijinks, but the bottom eight seeds were still up for grabs Now that we know who is seeded where we can look ahead to the 2014 MAC Men's Basketball Tournament, the 15th season the tournament will be held in Cleveland.

The first round of the tournament tips off Monday, March 10 with the bottom eight teams playing at campus sites. Seeds 5-8 host home games in Round 1, with seeds 9-12 hitting the road. The winners of the four Round 1 games advance to Cleveland for Round 2, which takes place on Wednesday, March 12 at the Quicken Loans Arena where the winners of 12/5 and 9/10 and 10/7 and 11/6 will face each other before advancing onto the quarterfinals. Buffalo and Akron, holders of the three and four seeds have earned double-byes and direct placement in the 2014 MAC Tournament quarterfinals where they will face the second-round winners.

Western Michigan and Toledo, co-MAC West and regular season champions are the No. 1 and No. 2 seeds in the tournament and won't play until the semifinals on Friday, March 14th. They will face the winners of the quarterfinals match ups. It all builds up to the 2014 MAC Men's Basketball Tournament Championship game on Saturday March 15th, at 6:30 p.m. on ESPN2.

Let's take a more detailed look at how the seeding breaks down:

With the No. 1 seed in hand WMU has a triple-bye in the 2014 MAC Tournament and won't play until the semifinals Friday, March 14 at 6:30 p.m. in Cleveland. WMU will face the winner of the Akron quarterfinal game.

Like WMU, Toledo locks up a triple-bye, and also won't play until Friday night, after the conclusion of WMU's semifinal game. The Rockets will face the winner of the Buffalo quarterfinal game.

Buffalo finished a game behind WMU and Toledo in the overall MAC standings, but captured its first outright MAC East title EVER. The Bulls also locked up the No. 3 seed with WMU's win and have earned a double-bye. The Bulls won't play again until the quarterfinals on Thursday after the first quarterfinal game. The Bulls will take on the winner of the 10/7 seed vs. 11/6 game.

By defeating rival Kent State Friday night the Zips locked up the No. 4 seed and a double-bye. Like the Bulls, Akron won't play again until Thursday night in Cleveland, but at 6:30.

Akron also concluded it's ninth straight 20-win regular season, joining a rare group of teams in the process. But this is the first time since 2011 that Akron hasn't won at least a share of the MAC East title. The last time that happened the Zips won the MAC tournament.

With their sixth-straight win in the Battle of the Bricks the Bobcats clinched the No. 5 seed Saturday. Ohio missed out on a bye with Akron's win the night before, but the 'Cats do get to host the 12 seed in Athens on Monday to open the MAC Tournament against 12 seed Ball State. The 'Cats will have to win five times to capture the MAC Tournament though, so it's a far from ideal situation.

Due to Ohio winning earlier in the day Saturday EMU clinched the No. 6 seed. This is due to the 'Cats having beat the Eagles in their only head-to-head matchup. EMU also get's a home game, against the No. 11 seed Central Michigan Chippewas on Monday in Ypsilanti.

Despite tying Miami in the MAC standings, NIU clinched the No. 7 seed with a win over Ball State Saturday night due to having beat Miami in their only head-to-head matchup back on Feb. 4. The Huskies get a home game and host the Bowling Green Falcons Monday in DeKalb in Round 1.

Having lost to rivals Ohio Saturday afternoon Miami left its fate in the hands of Huskies, and lost. The result is the No. 8 seed in the MAC Tournament. It still mean's a home game on Monday, but a less-favorable matchup against a Kent State squad that split the head-to-head series with the 'Hawks, and beat them by 12 on Tuesday.

Despite suffering a devastating loss on Friday to Akron (the Flashes were in the running for the No. 7 seed at the time) Kent State wound up with the No. 9 seed Saturday due to Bowling Green losing on the road at Buffalo. The Flashes pissed away a fantastic start to the 2013-2014 season to finish just a game over .500, and will travel to Miami on Monday in Round 1.

The Falcons got torched Saturday, resulting in a last-place finish in the East and the No. 10 seed in the MAC Tournament. Bowling Green hits the road and heads to Northern Illinois on Monday for Round 1. The Falcons lost to NIU by nine on Jan 12 in the only matchup between the two this year.

By finishing one game above Ball State in the MAC standings CMU clinched the No. 11 seed with the Cardinals loss to NIU Saturday night. CMU hits the road Monday to take on rival EMU in Ypsilanti for Round 1.

Concluding the worst season in program history with a big loss to NIU Saturday night sealed the Cardinals fate as the worst team in the MAC in 2013-2014 and as the No. 12 seed. Ball State has to head to Athens, home of the biggest home-court advantage in the MAC, to take on No. 5 Ohio on Monday in Round 1.

Here's what the 2014 MAC Men's Basketball Tournament bracket looks like: 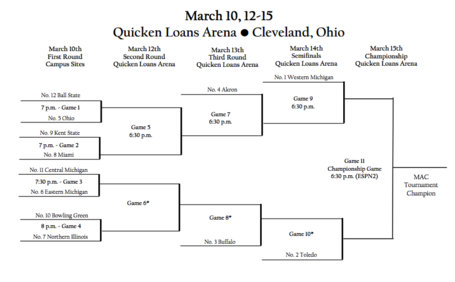