You got a better way to spend a buck?

Share All sharing options for: MAC Memorabilia for Sale On eBay: April 11th 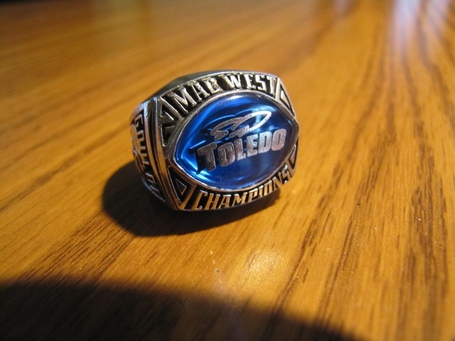 More ridiculously unnecessary Toledo bling.  This one is even more asinine than what we provided for you last week.  The 2000 Toledo Rockets were not MAC West Champions.

Like, did not even play in the conference championship game.  Like, didn't even have the best record in the MAC West.  The 2000 Rockets finished the season 10-1, with a 6-1 conference record.  Western Michigan finished 7-1 in the conference, and due to an unbalanced league schedule, the winner was the team with the better divisional record. Both teams finished 4-1 in the division, with Toledo's loss coming to the Broncos.

Typically the name of the player on a championship ring for sale online is withheld, but this poster makes it clear the ring once belonged to Dorian Goulde.  Goulde's role with the Rockets changed frequently, being listed as a running back as a freshman in 2000, then as a linebacker later in the season, and as a cornerback in 2001.  Goulde is not listed on the 2002 roster.  There also may or may not be a mugshot floating around out there.  I'll let you do your own research. 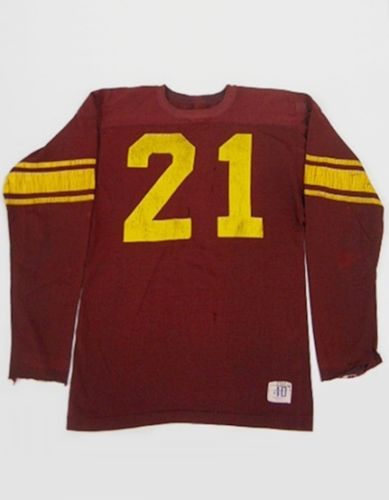 Sweet game used Chips memorabilia.  This one is complete with the wear and tear inconsistent with the jersey of a benchwarmer.

From 1950-1970 Central Michigan played in the Illinois Intercollegiate Athletic Conference.  For the most part this conference was comprised of directional Illinois schools and a bunch of tiny private institutions you've never hear of.  Eastern Michigan was kind enough to join the Chips for about a decade though.  CMU was crowned champion of the IIAC four times in the 60's. 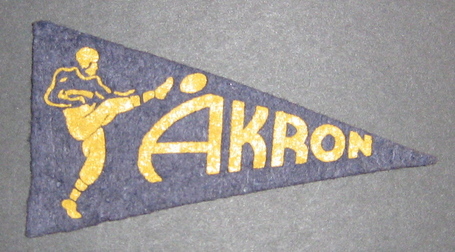 Sometimes it's simply impressive that a piece of memorabilia like this has lasted as long as it has.  75 bones and you could be the proud owner of an Akron football pennant from the 1936-38 era.

Those Zips compiled records of 6-2-1, 7-2, and 6-3 respectively, and were led by Jim Aiken, who would later coach the Oregon Ducks.  This is a throwback to an exciting time in Akron athletics. 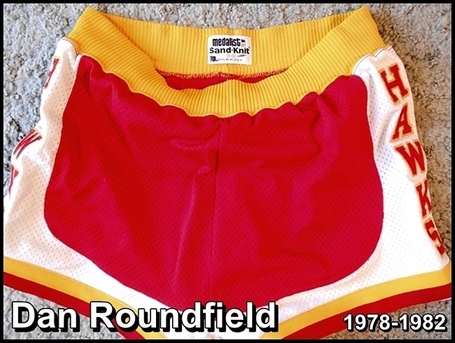 Miss the days of short shorts and want to pay homage to MAC history?  For a cool $132 (plus $10 shipping) you can be the proud owner of Dan Roundfield's game used shorts with the Atlanta Hawks from the 1978-79 season.

Before entering the ABA and then the NBA, "Dr. Rounds" was a two time first team All-MAC selection and the 1975 MAC Player of the Year.  Roundfield's career is one of the most impressive for a MAC product.  In 12 seasons with the Pacers, Hawks, Pistons, and Bullets, he was elected to three All-Star games, was a three time All-Defensive First Team selection, and a two time All-Defensive Second Team pick.

Later, Roundfield would become a bonafide hero.  In 2012 he died in Aruba, drowning after rescuing his wife Bernadine. 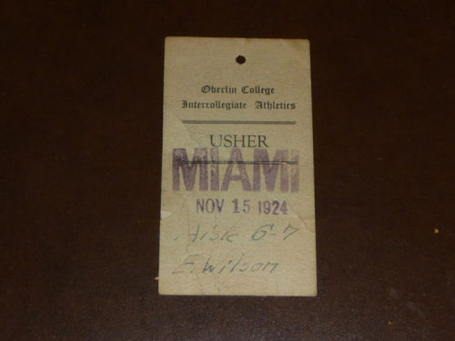 How does this survive?  Surely this is a must have for the collector of Miami RedHawks football (yes, that's a thing.)

For a smooth Jackson it can be in your collection.  The head coach for the 1924 squad was Chester Pittser, who came to Miami by way of the Montana School of Mines where he coached both football and basketball.

I know, I want a Montana School of Mines shirt too.

Pittser's start in Miami was rocky (see that?) as the RedHawks (then Redskins) mustered just a 2-6 record.  This game against Oberlin would go to the Yeomen, 13-2.  Pittser would be at Miami through the 1931 season.  Among his proteges were future NFL Hall of Famers Weeb Ewbank and Paul Brown.  The 1924 team also featured Virgil Perry, who has been described as a  "deadly tackler," and also played without headgear.