The Yeasty 16 is all set! Let's take a look at how things are shaping up in the updated Tournament of Brews bracket.

Share All sharing options for: 2014 Tournament of Brews: The Yeasty 16 Is All Set

Good work, gang. Rounds 1 & 2 just went swimmingly, but now it's time to make the heartbreaking choices, picking the winners of the Yeasty 16. Before we vote on that, let's take a look at the updated bracket and the winners of Round Two. 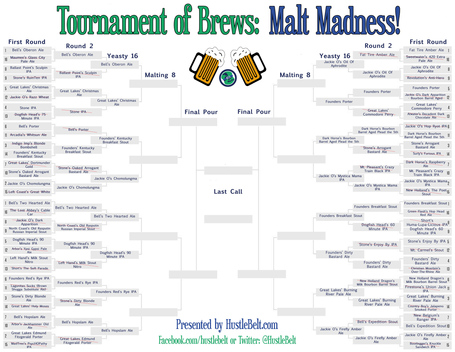 Round Two winners (upsets will have an asterisk* next to them):

Looks like we've got a Cinderella in the Kentucky Breakfast Stout! Go Mercer!

Whew; Hopslam advances, but that last one was way too close for comfort. Hopslam lovers like me should be worried for their chances to move onto the Malting 8.

Well would you look at that? A trio of lower-seeded beers march on in this region, including our first top-seeded beer falling to Oil of Aphrodite. And everybody thought Jackie O's was getting screwed over in this tourney. Ha!

Congrats to all of the beers that advanced, you have all served a great purpose (intoxicating) and we thank you for that.

For those of you that have been waiting until the weekend to enjoy a few beers, now is the perfect time to start playing along! Once you get out of work and are finally able to enjoy yourself with a nice cold one (or five), hit up the bar and see what's on tap. If you're at the right bar, then some of these brews left standing should still be available (a few of these, including many of Jackie O's brews are available in stores too). And tell your drinking buddies to join in on all of the fun. Voting begins now and we'll have our polls open until Saturday at 9 p.m. And, as always, vote early and vote often!