If you haven't had one of those "hold my beer and watch me do while I do a backflip off of this bar stool" moments, you should probably rethink your priorities.

Share All sharing options for: 2014 Tournament of Brews: Malting 8

Hopefully you all had a good weekend at the bars drinking your favorite beers. How did they hold up in our Yeasty 16 though? Let's take a look at how the readers voted in this round to see how the Malting 8 looks.

Yeasty 16 winners (again, lower-seeded victories will have an asterisk* next to them): 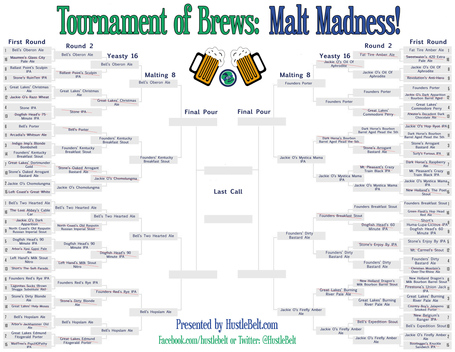 Look at this tourney run by Kentucky Breakfast Stout! Now they have to go on to face the average beer powerhouse that is Bell's Oberon.

This is probably the most intriguing matchup in our Malting 8. Two Hearted and Hopslam are two of Bell's best beers (not subjective), so it'll be interesting to see which beer middle America likes more.

No worries, Jackie O's beer fans, you have another beer winning in another matchup. Personally, I've never had Mystica Mama IPA, but it must be ridiculously awesome to beat Plead the 5th, even if was by a fairly slim margin.

I see you, Dirty Bastard. You beautiful dark ale, you.

Anyways folks, one more round until we get to the Final Pour. So let's finish things off strong and vote on who you think should win in our Malting 8 match-ups. Vote as much your heart desires, but you already know the drill by now, don't you? Voting is now open and will close Monday, April 14 at 9 p.m.