Share All sharing options for: MAC Memorabilia for Sale On eBay: April 18th

We found some real gems for you this week. Feed the pennant fix, get you some Mid-American Conference bling, personal notes from coaches, more weird Toledo stuff, it's a good week of finds. I find MAC items I want to purchase, but I will soon being cohabitating with my significant other. I have asked where I can display my MAC treasure trove. We agreed on the closet. Buy what apparently I cannot friends. 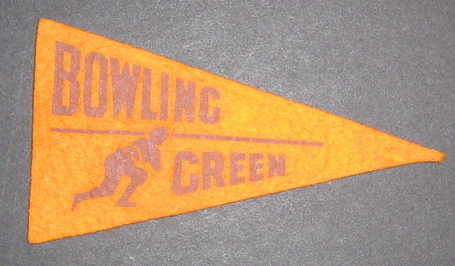 More classic MAC pennant action on eBay. By the way, we should always play for a pennant. In every sport. We shouldn't play for a ring, a trophy, a championship, a banner, we should play for the pennant. The term "pennant" and "pennant race" should just go ahead and be adopted by all sports.

This Bowling Green relic is from the 1936 season. The Falcons started off the season in impressive fashion, blasting those jackasses from Wittenberg, Hiram, and Ashland, to take three of the first four. The 1936 campaign would end with a 5-2-3 record.

These Falcons were lead by head coach Harry Ockerman. Ockerman left Bowling Green to take the head coaching position at Michigan State Normal College (later to become EMU). As coach of the Hurons he would become embroiled in controversy in 1951 when allegations were made suggesting he approved the use novocaine for injured athletes. This is of course a sickening course of action, and one that would never be approved on the NCAA today. 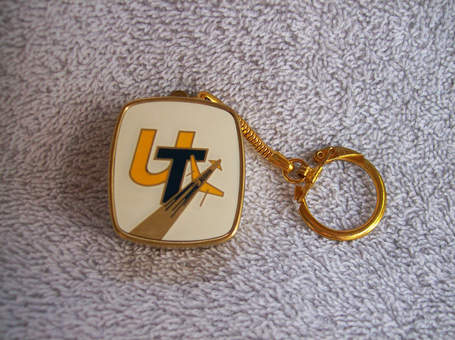 Check out this treasure! These key chains/music boxes were provided to the 2013 Toledo Rockets football team following their 55-16 home victory over Eastern Michigan on November 2nd.

Head coach Matt Campbell after the game told reporters, "This is truly one of the single greatest accomplishments of Rockets football. To go out here and beat a team that everyone has beat, in a game where we were overwhelming favorites, deserves a memento that will last a lifetime." No, he didn't say that, but this is a school that gave out division championship rings for a division they didn't win.

We've got bonus gifts with this one! The seller is including a pair of Toledo earrings, as well as a brooch. The description does not indicate what song the music box plays. Now, conventional wisdom would have you believe that it would be the Toledo fight song, however there's a sticker on the back that reads "Made In Japan," and in any event that would make too much sense. 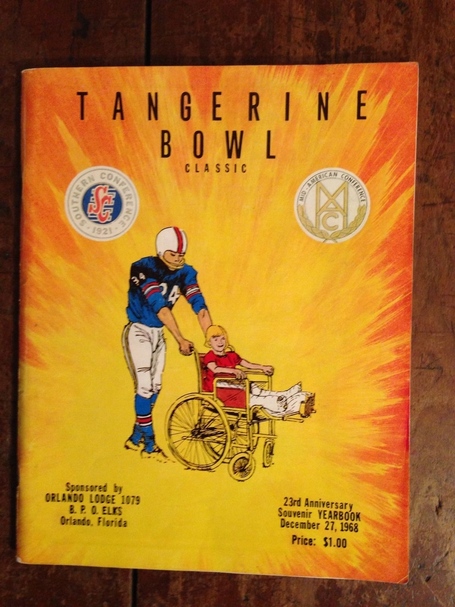 Vintage football and basketball programs are a dime a dozen, but this one in particular caught my attention. First observation, and you know what it's going to be: That cover.

I have no problem whatsoever with teams and various bowls donating money to any number of charities, and in fact encourage it. Isn't that cover pandering though? Just a little? Are we supposed to believe that the above scenario ever occurred, as the picture depicts? You think I'm a dummy 1968 Tangerine Bowl Committee? In full uniform? Really? Insulting.

So at first glance you probably don't think the 1968 Tangerine Bowl was anything special, but you'd be wrong friends. The Ohio Bobcats met the Richmond Spiders, and while we didn't get the win it was classic 1968 MACtion. Ohio entered the game 10-0 and ranked #15 nationally. The Bobcats were one of only three teams to finish the regular season unbeaten and untied.

Richmond entered the game 8-3 overall and won the Southern Conference with a 6-0 league record. In their first bowl game appearance in school history, the Spiders were considered huge underdogs by the national media. Richmond would later play in the 1971 Tangerine Bowl.

It was upset city in Orlando as the Spiders beat the Bobcats in a shootout, 49-42. Today Richmond plays on the FCS level. Ohio would finish the season ranked #20 in the country. After the game players from both teams went to the local hospital to play a game of touch football with kids. One of those kids was Joe Montana. I think. Maybe. 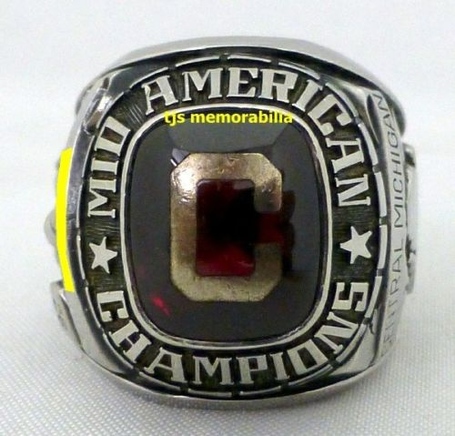 Here's something new to MAC Gems. A championship ring for a team that won a championship. The Chips finished the 1985 regular season 23-9 and were crowned MAC Champions. At the time the MAC did not have a postseason baseball tournament.

Notable among the '85 Chippewas was Kevin Tapani. Tapani would have a 13 year Major League career across five teams, winning a World Series with the Minnesota Twins in 1991. Already have a 1985 Mid-American Conference baseball championship ring in your collection? Fear not.

Because you can get the 1987 championship ring! CMU was actually a bit of a baseball dynasty, winning six MAC championships between 1984-1990. The 1987 squad featured a couple of guys who had a cup of coffee in the show and finished 23-7 overall. Now obviously there's a strong possibility that both of these rings belong to the same person. Hustle Belt researchers are working the phones to find out who could part with such choice MAC history. A thousand bucks apiece and they could be yours. NO LOW BALLING! 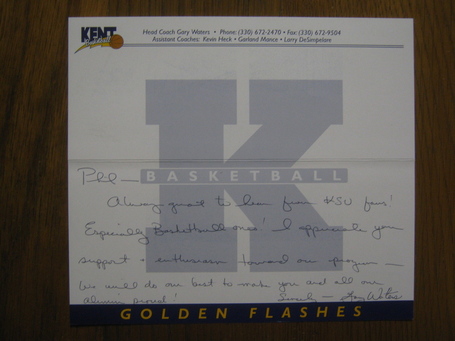 Ok, let me first say that I don't have any reason to believe that Gary Waters is a bad dude. Waters is in his eighth season as the head coach of Cleveland State following five years at Rutgers, and before that a four year stint at Kent State.

He left the Golden Flashes after going 24-10 and reaching the second round of the NCAA Tournament in 2001. I am going to suggest however, that Waters very personalized note to a fan named "Phil," holds no actual value. None, zip, zilch, and certainly not the 25 bones you're asking for, Phil.

I suppose if your name is Phil you could purchase and concoct a backstory about you and Gary Waters, but I don't think that would be a very good story. On top of that, it's little more than coach speak. Alumni! Basketball! Rah, rah, rah! Thanks! Now if this was a note referencing duffel bags full of cash, cocaine, women, and taking measures to scoot by the rules of the NCAA, you may have something. Hold onto it Phil, not worth the hassle to ship.

Note: We have no reason to believe Gary Waters is connected to cocaine or even owns a duffel bag.