We're inching closer and closer to draft night; what are people saying about our beloved MAC prospects? We;ve got your answers here in this weeks mock draft roundup.

This Thursday night we will officially be just two weeks away from the 2014 NFL Draft. As we have the last several weeks, let's make the internet rounds and see what's being said about the prospects from the MAC.

Mr. Kiper over at the Worldwide Leader posted his list of top 100 draft prospects (Insider req'd), which featured three MAC guys: Khalil Mack (#3), Jimmie Ward (#50), and Dri Archer (#59). Mack's position on the list is pretty expected, considering he has been Kiper's third-best player on the Big Board for awhile (behind Jadeveon Clowney and Greg Robinson), and he does state, for what it's worth, that it wouldn't surprise him to see Mack go number one overall. 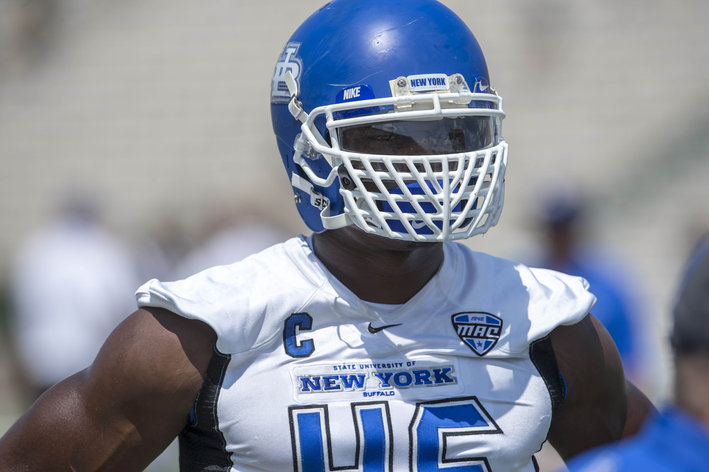 On the latest episode of Mid-American Hustle MockingTheDraft.com's Dan Kadar joins to talk about the NFL Draft prospects of various MACletes, including Khalil Mack, Jimmie Ward and Dri Archer.

Of Ward and Archer, he had this to say:

"I'm not sure there's a better cover safety in the draft in terms of instincts and breaking quickly on the ball path." (Ward)

"The fastest player in the draft, the pint-sized Archer will get Darren Sproles comps, as he'll be used all over." (Archer)

Those are two pretty big superlatives to be throwing around and it should be a testament to just how good these MAC prospects are. According to Kiper, the conference produced this year's best cover safety, it's fastest player, and perhaps the best talent in the draft, period. That's quite the compliment.

His rankings, however, are not reflected in his most recent mock draft (which he does note in the introduction, but still). In his first multi-round mock draft of the year, Kiper has two MAC guys: Mack (#5- Oakland) and Ward (#44- St. Louis).

"Mack gives the Raiders a needed pass-rusher, even though they've already spent some money on the position in free agency, adding Lamarr Woodley and Justin Tuck. Mack would also provide them with another good building-block player on defense, along with fellow linebacker Sio Moore."

"Ward can be special in coverage and fills a need for the Rams, as he can pair with the now healthy T.J. McDonald to shore up the back end of that defense.

First, regarding Archer's absence: the first running back in his mock doesn't come off the board until the second-to-last pick in the second round. It's not breaking news that the role of running backs in the NFL has been decreasing quite a bit in the last few years. Archer is an exciting and intriguing prospect, but taking him in the first couple of rounds is a big risk considering his probable value as a return man and occasional spark plug on offense. He is, of course, still drawing plenty of interest, though:

As for the other two guys, their placements within Kiper's mock aren't too surprising. Mack landing at number five makes sense; Clowney, Sammy Watkins, and Robinson are all selected prior to Mack and are all ranked ahead of him on either Kiper's Big Board or his top 100 prospect list. The other guy selected ahead of Mack, Johnny Manziel, is a product of drafting for position over best player available. It would not surprise me if this outcome came true. Ward also makes sense too, seeing as he's been labeled as a second round pick.

Elsewhere around the internet, just one writer on NFL.com has an updated mock since last week. Charles Davis has Mack going number three overall to the Jaguars, which is not a change since his last update. Looking at SI.com, Don Banks also has Mack going third, as does his colleague Chris Burke. Banks had this to say about Mack.

"Don't get the idea this will feel like a consolation prize for the Jaguars, even if they miss out on the draft's best pass rusher and receiver with Clowney and Watkins gone. Mack is the kind of disruptive, playmaking force Gus Bradley's defense can make great use of, and he has the non-stop motor to chase the ballcarrier all over the field, with the versatility to play all three downs."

One last special MAC prospect note: Jordan Lynch's episode of Jon Gruden's QB Camp will debut Monday, April 28th at 5:00 ET. Be sure to tune in and see what Gruden has to say about the former Heisman finalist.