For the Western Michigan collector who has everything. I mean everything.

Share All sharing options for: MAC Memorabilia for Sale on eBay: April 25th

It's easily the best collection of MAC items we've found on eBay to this point.  It gets a little dark with what we are offering up, but muscle through it and get to the end.  I need your help with what might just be an item from the era of college basketball's first national champion. 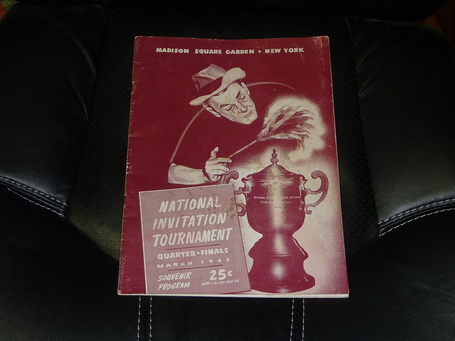 We've got some heavy stuff this week, so we're starting off relatively tame.  Back when the NIT, not the NCAA Tournament, was the coveted postseason play in college basketball, Bowling Green was invited to Madison Square Garden for a shot at the crown.

The Falcons were joined by Arizona, Kentucky, Muhlenberg, Rhode Island, St. John's, Syracuse, and West Virginia.  Bowling Green would fall in the first round to Rhode Island, 82-79, who would eventually lose in the title game to Kentucky, 46-45.  100 bucks for this program may sound steep, particularly since the NIT felt the best marketing strategy for their postseason tournament was to feature the guy responsible for dusting off the trophy.

The '45-'46 Falcons were led by Don Otten.  The 6'10" 240 pound center from Bellefontaine, Ohio would go on to have a successful professional career, being named NBL MVP in 1949, and playing in the NBA until 1953.  Otten is notable for holding the NBA record for fouls in a game, with eight, established in a 1949 game between the Tri-Cities Blackhawks and Sheboygan Red Skins.  That number is exactly half of what Robin Lopez needed against Dwight Howard on Wednesday night.  (It's not MAC related, but did you see it?  Man, that was abusive.) 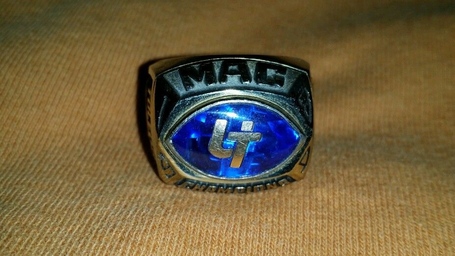 So my original plan was to take every opportunity to clown Toledo in these articles, particularly after coming across a championship ring for a championship they didn't win. I found a circa 1936 pennant featuring, not a quarterback, not a linebacker, not a player or coach at all, but a female fan sporting a smile that I feel is probably inconsistent with the enthusiasm of early '30's Rockets football.  Unfortunately that auction ended prior to construction of this article, so to feature it prominently would be to comprise the integrity of an article chock full of integrity.  You can check out the expired auction here.

That's when I remembered that former Toledo athletes are allergic to championship rings.  True to form, posted just Wednesday, eBay offers up for bid a 1984 MAC football championship ring.  The first thing that I noticed about this bling is that it's not bling at all.  It's remarkably modest when compared to the gaudy and garish rings of today.  You could actually wear this day to day and not have people think you're a total asshat.

We get a name on the side of the ring, information not always available on eBay.  If this is indeed the ring of Mike Karabin, it's the ring of one of the most influential Rockets in Toledo athletics history.  A 1980 graduate and member of Toledo's Hall of Fame, Karabin served the university 32 years until his retirement in 2011.  As a player, Karabin won a MAC batting title and played two years in the Cubs organization.  As an administrator he played the role of athletic director, among others, and led unprecedented growth for Toledo athletics, including record breaking football attendance.  Perhaps "Promotions Director" didn't pay the bills in 1984.  Either way, this piece of MAC history is up for bid. 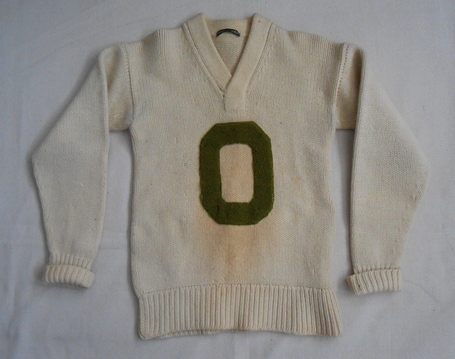 Check out this beauty.  The seller claims to be able to date the sweater back to 1922 because it belonged to a relative who played football, basketball, and ran track for the Bobcats.  If that's true, it marks a good time to be a Bobcat.

The 1922 football squad posted a 5-3 record overall.  That includes a thrilling 7-0 win over those bastards from Denison.

The 1921-22 basketball team finished with a record of 19-4 overall, winning what amounts to a conference championship.  The next year the Bobcats went 11-8 and handled their business against those jackasses from Marietta.

You didn't think I would find anything having to do with Ohio track from 1922 did you?  Well I did.  Almost.  In 1923 Ohio built the Men's Gymnasium, housing both basketball and track.  So it's possible this guy was among the first to run in the new facility.  The gymnasium was built partly to attract more male students to the university.  Because no one gives a damn how smart you are if the other dude is faster than you. 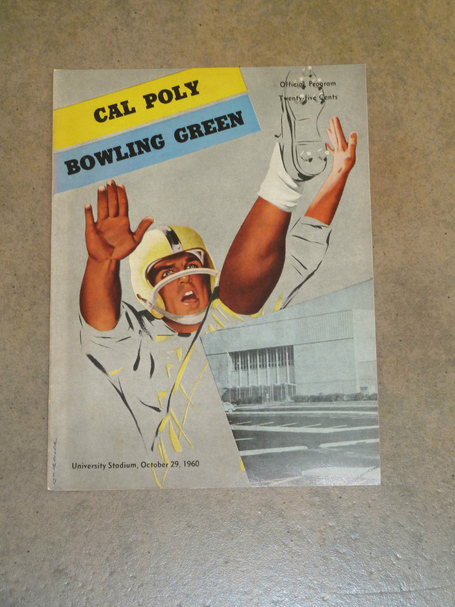 Somber MAC Gem and that's not our game, so let's do this quick.  The 1960 matchup between Cal Poly and Bowling Green was marred in tragedy when following the game a plane carrying the Mustangs went down.  The crash killed 22, including 16 members of the football team.  An investigation would later show that the aircraft was overloaded by more than 2,000 pounds.

The tragedy would give berth to the Mercy Bowl, a 1961 matchup between Fresno State and Bowling Green in Los Angeles, raising money for the widows and children of those that perished.  The Bulldogs would beat the Falcons 36-6.  That program can be seen here. 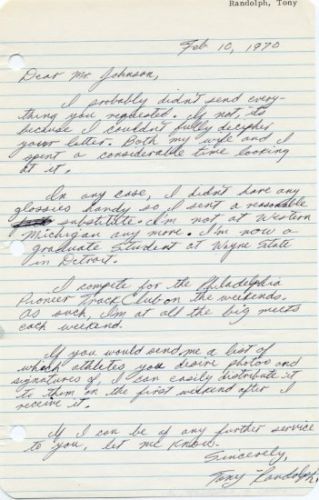 Unquestionably the most interesting item featured on MAC Gems to this point.  Thomas "Tony" Randolph Jr. lived quite a life until 2001.  Randolph grew up impoverished in Harlem, was a high school dropout, and earned a GED before joining the U.S. Army and serving in Vietnam.

After that Randolph enrolled at Western Michigan.  As a Bronco he was a 5-time All-American sprinter and was a finalist for the 1968 Olympic team.  He would eventually be inducted into the Western Michigan Hall of Fame in 1985.  Following his career at WMU, he earned a master's, doctorate, and law degree from Wayne State University.

In 1982 Randolph's wife, Sharron Randolph, was murdered outside a Chinese restaurant in Southfield, Michigan.  19 years later, in 2001, the Western Michigan standout was convicted of first-degree murder and sentenced to life in prison.  Randolph is serving that term at Macomb Correctional Facility in New Haven.

Many have suggested and supported Randolph's innocence.  There are conflicting accounts of what happened that night, and family members have been pitted against one another.  It's certainly a fascinating story and one Randolph isn't shy about telling.  Nevertheless, Randolph has all but exhausted the appeal process, and is now hoping to have his sentence commuted.

This item available for bid is a letter from Tony Randolph that interestingly enough, does reference his wife.  Perhaps because of Randolph's story, this is not an item that a die hard Western Michigan University collector would be interested in.  There are also those people who build collections of items related to nefarious crimes, but maybe this isn't salacious enough for their tastes.  For the fan with both interests, this could be your item.

Ok, so we wrapped up MAC Gems with a plane crash and a murder.  Down in the dumps enough?  I won't leave you like that, so we've got bonus MAC Gems!  First a follow up from last week, and then an item I'm not even sure is MAC related. 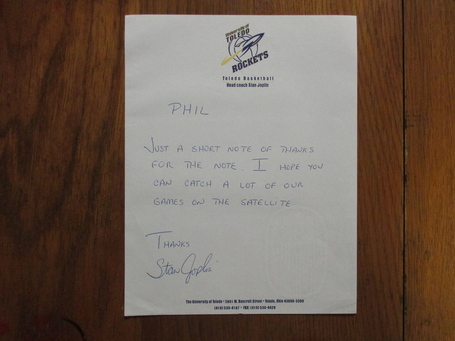 Ok so last week we clowned this guy Phil, who was trying to sell his prized Gary Waters personal note on eBay.  Well this week a Stan Joplin note pops up.  So evidently Phil fancies writing random coaches, holding onto notes for a few years, and then selling them on eBay as autographs.  I told you the Gary Waters note wasn't worth $25, and I'm telling you the Stan Joplin note isn't worth $29.  Though his difference in pricing is interesting.  He does have quite a collection.  So if you need notes from Pat Dye, Lute Olson, or Geno Auriemma, hit up brotherpreacher on eBay. 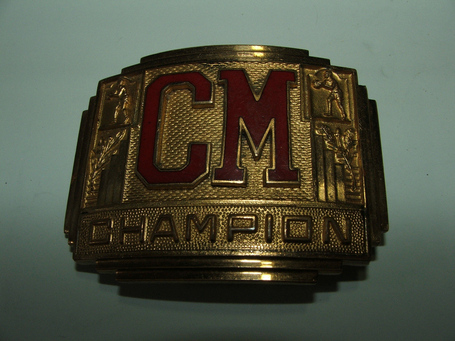 Ok this is the one you've got to help me out on.  At first glance, this looks like it could be a championship belt.  It's not, the picture is just big, it's actually a belt buckle.  That said, we should give out championship belts instead of trophies.  The trophy can't  be shared anymore than a belt, and the belt commands more attention and as the kids say, "swagger."  Who wears it?  The head coach.  I lack the appropriate Photoshop skills, but somebody show us what Terry Bowden looks like wearing a championship belt, pronto.

So, here's what we know.  The seller lists it as "Original Vintage 1937 Central Michigan University college basketball belt buckle."  Featured on the front of the buckle are the letters "CM," the word "champion," and two depictions of basketball players.  On the back is the year "1937."

So I did some research about the 1936-37 Chips.  That squad finished the season 8-6, hardly the mark of a champion.  So the next step was to determine if a school incorporating the letters "CM" was crowned champions on the hardwood in 1937.  Maybe it is "Central Michigan," but on the high school level.

The 1937 boys high school champion was Muskegon High School, located in west-central Michigan.  The Big Reds wear red and white, and interestingly enough, last won the state title in 2014, their first since 1937.  I felt it unlikely this buckle was associated with the '37 team.

Ah-ha!  I did however find a more plausible lead.  In 1937 the Mules of Central Missouri State University won the NAIA title, knocking off Morningside (Iowa), in a 35-24 barn burner.  If this belt buckle is in fact a memento of that game, this guy might not know what he has on his hands.

The 1937 NAIA title game was the first of it's kind, and predates the NIT by a year, and the NCAA Tournament by two.  It's literally the first college basketball national championship.  If this belt buckle is associated with that game, the seller may be able to bump up the modest $75 dollar buy it now price.

Or maybe the CM stands for "can't miss" and it was from a free throw shooting contest.