Rob Blanchflower has a chance to be the 24th UMass player to be drafted on May 8th. Let's take a look at the list he could be joining.

The Massachusetts Minutemen have seen a significant drought in their collegians hearing their names called at the NFL draft. In total they have had 23 players drafted (in both the AFL and NFL), but only three since 1980. Arguably the two most famous UMass players as of late, Victor Cruz and James Ihedigbo, weren't even drafted!

Let's take a look at those Minutemen who were actually drafted and see how they fared.

The 60's were a good decade with nine players drafted and the first being running back Fred Lewis by the Oakland Raiders in the 17th round of the 1964 draft. Lewis never played a game for the Raiders. The '65 draft saw QB Jerry Whelchel drafted by San Diego in the 9th round of the AFL draft and LB Phil Vandersea taken in the 16th by Green Bay. Whelchel didn't end up making the team but Vandersea stuck around in the league from 1966-1969. He was a part of the 1966 Packers team that won the first-ever Super Bowl.

1966 was the best individual year for UMass, which saw four players taken and one taken in both the AFL and NFL draft. Tight End Milt Morin was the cream of the UMass crop that year as he was the 14th pick of the NFL draft by Cleveland and was taken in the 3rd round of the AFL draft by San Diego. Morin was a two-time Pro Bowler in 1968 and 1971. He was also inducted in the College Football Hall of Fame in 2010. The next two players, Bob Meers (End) and Bob Ellis (DE), were taken in the 7th round by Minnesota and by Cleveland in the 15th round respectively. Neither player would make an NFL roster. The last player taken was Ed Toner. Toner, a DT, was picked by the Boston Patriots in the 18th round and would play 3 seasons with the team. He appeared in a total 26 games in his time there.

Greg Laundry was the lone UMass player drafted in the '68 draft. This quarterback was selected in the 1st round at pick number 11 by the Detroit Lions. He would be the last UMass player drafted in the first round. Laundry Debuted in '68 and last played in the NFL in 1984. He spent his first 11 years with the Lions before leaving for Baltimore in 1979. He was cut from Baltimore in 1981 and then bounced around the USFL before being picked up by the Chicago Bears in 1984. His best year was in 1971 where he earned All-Pro honors and was elected to the Pro Bowl. While he had a long football career his numbers were fairly pedestrian. His starting QB record was 44-51-3 and he tossed 98 TD's along with 103 INTs.

The 1970's were the most prosperous decade for UMass with 11 players taken. WR Steve Parnell was the first, selected in 1970 by the Falcons in the 16th round. Parnell however failed to make the team. TE Nick McGarry who New England got in the 15th round in '71 also couldn't make the squad. Guard Bubba Pena who was drafted in the 4th round by Cleveland only played one season for the Browns, starting four games in the 1972 season.

1972 saw two players taken, John Hulecki (G) and Harold Parmenter (DT). They were both taken in the 15th round with Hulecki taken by the Steelers and Parmenter by Denver. In 1973 Paul Metallo (DB) was taken by the 13th round by the Chiefs. None of these players would go on to play a down in the NFL.

Two more players were taken in 1974. QB Piel Pennington and WR Tim Berra were taken by Denver (15th round) and the now defunct Baltimore Colts (17th round) respectively. Pennington didn't make the team but Berra would appear in 14 games during the 1974 season as a kick and punt returner. That would be his only season in the NFL after getting the boot from the Colts.

Defensive Tackle Bill Cooke was taken by Green Bay in 1975 during the 10th round. He had a relatively long career compared to many of his comrades, playing from 1975-1980. He played with four different franchises including the Packers, 49ers, Lions, and the Seahawks. He appeared in 75 games but only started 6 of those.

Ed McAleney was a dominant DT at UMass and the Steelers took him in the 8th round of the '76 draft. His pro career was a long one, ten years, but only one was in the NFL. Ed spent the '76 season with the Buccaneers and was cut at seasons end. He then was picked up by the Calgary Stampeders of the CFL and played there from 1977-1983, where he was named to the Western All-Star team in 1980. His last two years were spent in the USFL with the Pittsburgh Maulers in '84 and the Orlando Renegades in '85 to close out his career.

The Pittsburgh Steelers broke the 3 year hiatus of UMass players at the draft in 1979 when they selected Bruce Kimball (G) in the 7th round. Similarly to McAleney, he would never play for the Steelers. In fact he spent his first two professional years in Canada with the Toronto Argonauts. He would make his NFL debut with the New York Giants in 1982 and would also play with the Washington Redskins for the '83 and '84 season. He only appeared in one game with the Giants and that was also his lone NFL start. With the Redskins he played in 24 games but never as a starter. He was inducted into the UMass Hall of Fame in 2000.

Sandro Vitiello was selected in the 10th round of the 1980 draft by Cincinnati Bengals. He is the lone kicker to be drafted out of UMass and he wouldn't have a long stay in the NFL. His two career field goal attempts were both misses but he was a perfect 1-1 on PATs. Not surprisingly 1980 was his only year in the league. 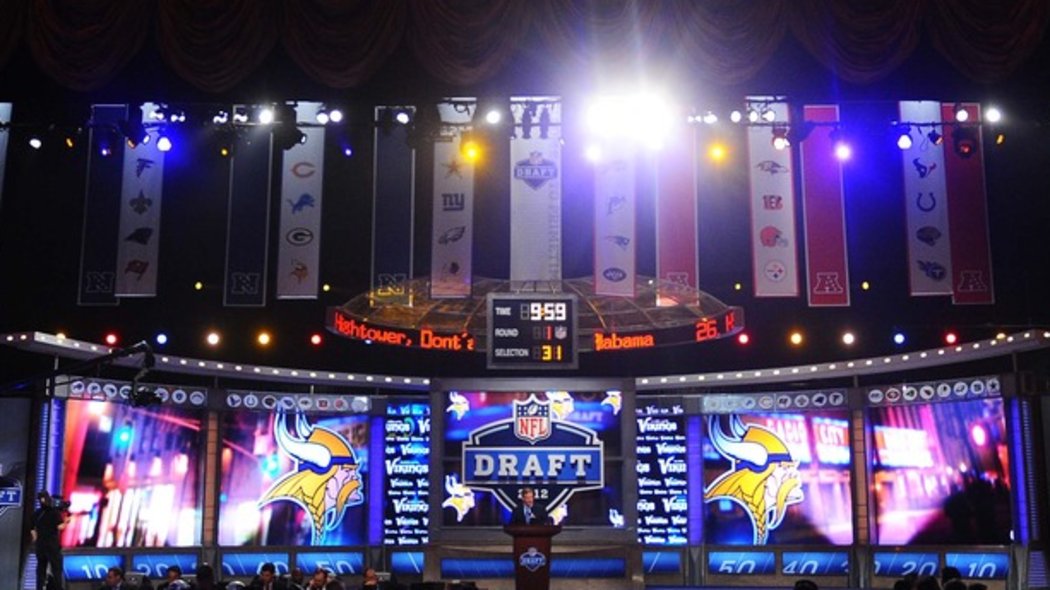 We've profiled 15 of the MAC's top pro prospects. Where will they wind up being taken in the 2014 NFL Draft?

After a long 19 years, Khari Samuel (LB) was the first UMass player to be drafted since Vitiello in 1980. The Chicago Bears took him in the 5th round of the 1999 draft and he would call the Bears home from 1999-2001. He also played the 2001 season with the Detroit Lions and finished his career with the Houston Texans but never made it out of training camp. Samuel was a star at UMass and was named First-team All-American in 1998 as UMass captured their first ever FCS National Championship.

The Minutemen would have another long wait to hear one of their own called again, 11 years to be exact. In 2010 the New York Jets took Offensive Lineman Vladimir Ducasse in the 2nd round, the highest UMass player taken since Laundry. At UMass he was named to the 2009 FCS All-American Frist Team along with being named to the CAA All-Conference Frist Team. Ducasse earned the starting job at left guard in 2013 but lost it after poor play. He was cut after the season by the Jets and signed a new one year deal with the Vikings on March 24, 2014.

The last UMass player to be drafted was Michael Cox (RB) in 2013 by the New York Giants in the 7th round. Cox only played one year at UMass as a graduate student, transferring from Michigan after obtaining his undergraduate degree. Cox played a limited role only rushing for 43 yards but made his first NFL start on Monday Night Football on October 21, 2013.

Now that the 2014 NFL Draft is right around the corner, could Rob Blanchflower add his name to the UMass list? This would be the first back to back years with UMass players drafted since 1979 and 1980. While Blanchflower probably won't be drafted very high (if at all) he has a good chance at making an NFL roster and is a talented tight end prospect.