You know the big guy, but the expansive annals of the NFL Draft are littered with men who once donned the red and white for Miami University.

With the first pick in the 2004 NFL Draft, the San Diego Chargers selected Eli Manning, quarterback from Ole Miss. It was at that point that the drama began.

Manning had declared prior to the draft (with his father echoing his sentiments) that he would not play for the Chargers, prompting San Diego to trade his rights to the New York Giants, who held the fourth overall pick. In exchange, the Chargers received a package of draft picks including that number four pick, which turned out to be Philip Rivers. Everyone loves quarterbacks, and everyone loves the draft, so this was a dream opportunity for NFL analysts who yell on TV for a living to shower us with their opinions on the matter.

After the dust settled and nine other selections were made, the Pittsburgh Steelers selected quarterback Ben Roethlisberger, the best football player to ever put on a Miami (Redskins) RedHawks uniform.

When discussing the history of NFL Draft selections from Miami, the name on everyone's mind is Roethlisberger. He's a two-time Super Bowl champion, and his first title in 2005 made him the youngest quarterback to win a Super Bowl (23) in NFL history. His ability to evade the pass rush and extend plays has been well documented, and his career numbers are impressive as well.

Roethlisberger is currently in, or very near, the top 25 for career passing yards, touchdown passes, and passer rating, and he's only going to vault his name higher in the coming years. During his time at Miami, Big Ben broke virtually every important passing-related record and made the RedHawks a nationally-relevant football program, vaulting them to a top-ten ranking in the AP poll. He was inducted into Miami's Hall of Fame in 2013. 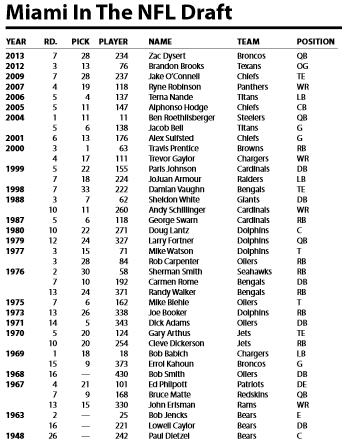 Of course, Roethlisberger isn't the whole story when it comes to RedHawks in the NFL Draft. He is just one of 38 former Miami football players to be selected. Miami's draft history started off on the right foot with the selection of Paul Dietzel in the 26th round of the 1948 draft by the Chicago Bears. Dietzel didn't end up playing for the Bears, but he still turned out alright. He won a national championship as the head coach at LSU and earned enshrinement into Miami's Cradle of Coaches.

It took almost 20 years for another player from Miami to have a lasting career in the NFL. College Football Hall of Famer Bob Babich was the 18th overall pick in the 1969 Draft when he was taken by the San Diego Chargers. Babich spent nine years in the NFL, three with his original team and six with the Cleveland Browns, and he started 86 of the 125 games he played as a linebacker. His selection also came during a time when the draft was littered with Miami guys; Babich was one of nine players drafted between 1967-71.

The 1970s were a better time for Miami draft picks than any previous decade, as there were a few guys who saw some consistent, albeit modest, success. Sherman Smith and Rob Carpenter were selected in consecutive drafts: Smith in the second round by the Seahawks and Carpenter in the third round by the Oilers.

Smith played for eight seasons and was one of Seattle's primary backs his first four years in the league, posting three years with over 1,000 yards from scrimmage. He posted 748 rushing yards and 11 touchdowns in 1979, and that earned him second team all-conference honors.

Carpenter spent most of his time at fullback but did his fair share of running the football. He rushed for a career-high 822 yards in 1981 with the Giants and Oilers. Smith and Carpenter were also two of three former Miami players taken in the top-100 picks in that decade, the other being tackle Mike Watson in 1977. That's the most top-100 picks in any decade for Miami.

The 1980s and 1990s were a bit more barren in terms of Miami draft picks. Only seven players were taken between 1980 and 1999, and only one of those came in the top 100 picks. Sheldon White was the 62nd overall pick in the 1988 Draft, and he went to the Giants. White also spent time with the Lions and Bengals, though he only started seven games as a defensive back during his six year career.

Miami did round out the 20th century with two picks, though: Paris Johnson and JoJuan Armour. Armour was drafted by the Raiders but later signed on with the Bengals, where he spent four years as a safety. In 2004 he jumped over to the Canadian Football League, where he spent six years as a linebacker. In 2008 he won a Grey Cup with the Calgary Stampeders. Armour recorded four tackles and a sack in the game.

The 2000's started off the way the 1990's finished, with two draft selections, including Travis Prentice, former NCAA record holder for career rushing touchdowns in FBS history. Taken in the third round, Prentice never made a big impact in the NFL. He ran for 512 yards and seven touchdowns for the Browns in 2000, and that was his only year with any notable production.

The other Miami selection that year was Trevor Gaylor, a wide receiver taken in the fourth round by the Chargers. Gaylor also didn't have any success in the NFL but, like Armour, went on to win a Grey Cup. Gaylor was a member of the 2005 Edmonton Eskimos team that beat the Montreal Alouettes, the same opponent defeated by Armour's Stampeders.

The next year to see notable production from former RedHawks was 2004. Big Ben is the name everyone knows from that year, but guard Jacob Bell was also taken in that draft with a fifth round pick by the Titans. Bell played eight years in the NFL, four with the Titans and four with the Rams, and he was named to several all-rookie teams during his first year in the league. Bell signed a contract to play with the Bengals in 2012, but he made waves by abruptly retiring just a month after signing, citing the potential health risks of football as his main reason.

"I've been thinking about some different things, thinking about health, thinking about the future of my family having to deal with some kind of crazy disease that nobody even knows about, where people want their brains studied after they're dead...I want to get out before the game makes me get out."

After the successful 2004 draft, Miami players were taken in four of the next five drafts, although none really achieved any success at the professional level. 2009 draftee Jake O'Connell did sign with the Broncos prior to the 2013 season, but he was cut shortly thereafter.

After going a couple of years without a draft pick, Miami has had players taken in the last two drafts. Guard Brandon Brooks was taken by the Texans in the third round of the 2012 draft, and he looks to be a part of Houston's plan for the foreseeable future. Last year, quarterback Zac Dysert was taken in the seventh round by the Broncos, and he was promptly slotted into the third-string role behind Peyton Manning and Brock Osweiler. The way it stands right now, Brooks will join Roethlisberger as the only players drafted out of Miami to make an impact this upcoming NFL season.