2014 Tournament of Brews Bracket: The First Round is On Us

Bud Light claims to be the King of Beers. We like democracy, so we're here to decide on the which beer should be crowned the President of the mid-major (craft) beers.

Share All sharing options for: 2014 Tournament of Brews Bracket: The First Round is On Us

It all started on Opening Day. No, not MLB's Opening Day, but the one for Bell's Oberon. I was bored enough to hop onto our twitter account to talk about Oberon Day with our followers, and received some pretty good feedback.

It's a really slow day today. We've got some women's basketball going on right now, but it's also #OberonDay.

And let's just be honest with ourselves for a moment. Oberon is overrated.

After a few minutes of talk to our beloved tweeters about beer (aka #MACtion), Bryan and I decided that there's so much passion for beer (read: #MACtion) in the midwest that it'd only be right to have a #MACtion (jk, beer) bracket!

After #MarchMadness dies down we’ll do a Beer bracket and let you help us decide the kind of Mid-American beers.

Welp, it's simmered down and now it's time to take care of some business.

Back in our headquarters, our sober writing staff put together a list of delicious craft beers from all over the country. From Stone IPA in California to Short's Huma-Luma-Licious in Michigan, 64 brews made several cuts to end up on this bracket for all of us to enjoy.

How This Will Work:

Starting today with the First Round, you'll be able to vote on who should win each match-up based on, well, however you feel like it! And hey, if you like the beer you just voted for that much, vote again! Vote again, and again, and again, and vote until you have to leave your computer to go buy a 6-pack of whatever you're voting on, then come back and vote some more!

It's YOU that gets to decide the winners of these match-ups. Which ever beer receives the most votes will move onto the next round.

What You Should Do:

Besides voting, the best way to enjoy this wonderful tournament is to drink! I mean, how can you be active on Malt Madness and not drink? If you're interested in trying a few beers on here, head out to a bar with craft brews on tap and get a sampler of some of these! They're fairly inexpensive, and you get a variety of craft beers to try.

What's a Madness tourney without a printable bracket. Click HERE for a PDF version of our bracket. Bryan and Dave spent their Sunday's building this bracket. Prepare to weep in awe of it's magnificence. 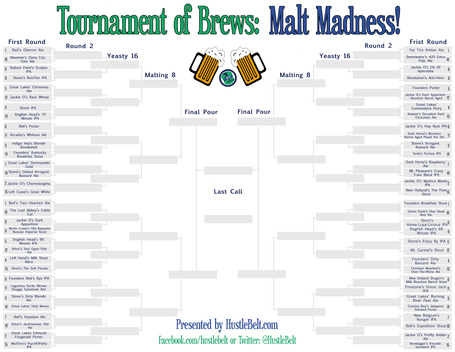 Be sure to fill it out, post it on Facebook or Twitter, and let us know who makes your Final Pour, using #MaltMadness as the main tag!

VOTE NOW! (Must be a valid Hustle Belt user, not one yet, click sign up in the top right corner and join. It's free, fast and we don't send you emails becaue we're not into spam like some of those other guys.)