2014 Tournament of Brews: We Had Round One, Round Two Is On You

Round One was exciting, but we're still dehydrated. The weather's starting to pick up a bit, so stay hydrated by drinking more craft beer and keep up with all of the Malt Madness going on!

Share All sharing options for: 2014 Tournament of Brews: We Had Round One, Round Two Is On You

So far, so good. The Malt Madness is real and we're already finished with the first round of our craft beer bracket. Get your red pens and highlighters ready, it's time to see how well your brackets did through the first round. 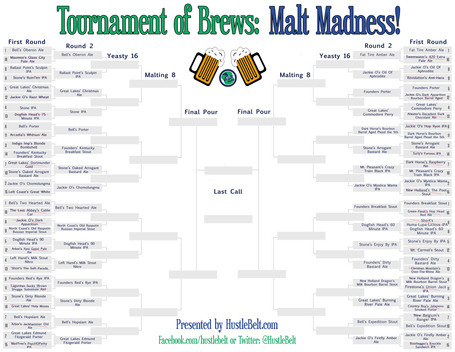 Round 1 Winners (upsets will have an asterisk* next to them):

Hmm, only two upsets in this one, but they weren't landslides. Let's take a look at how the next region fared, shall we?

Again, straight chalk for the most part. 9-seeds over 8-seeds aren't the sexiest of upsets to note, but they won fair and square. Time to move onto the other side of the bracket. EAST SIDE!

Look at that Plead the 5th/Hop Ryot matchup! Not much breathing room for them, but the Dark Horse brew advances, and so shall we! Onto the last region of the bracket before we start voting again; excelsior!

So there you have it, folks. Now that you've got your winners for Round One, it's onto the next one! If you're upset that your bracket is already ruined (thanks, Mercer), I know the perfect remedy for you: DRINK! And be sure to try out some of the 32 remaining beers that you haven't already had before. No need to get too crazy and buck wild over these (but if you do, call a cab), you can always just get a sampler of some beers from a bar near you that has some of these on tap for you.

Okay, less reading, more voting! Again, you can vote as many times as you want, just remember that you have until Thursday, April 10 at 9pm to do so. And you must have an SB Nation account and be a member of Hustle Belt to join in on all of the fun, but you've joined months ago, so that's not a problem.