I am going to encourage you to make it all the way through this article before determining what you want to purchase.  The first item will have you wanting to break the bank, but resist!  There's plenty of MAC history to choose from.  Unfortunately this week doesn't include a ridiculous and unnecessary Toledo item.  For that I'm sorry.  With finals recently concluding however, surely there's an athlete out there who passed an exam, and for that they will receive a championship ring.  Until then take a break from all the NFL Draft coverage, as we wait for the flood of memorabilia sure to hit eBay from undrafted free agents, and check out these goodies.  Your May 16th MAC Gems: 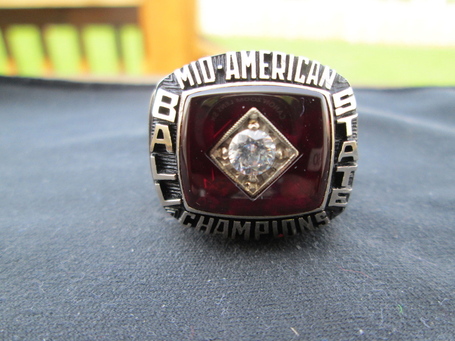 Let's get one thing straight.  There's a number of reasons that college championship rings wind up in some pawn shop owner's showcase.  Dreams of mega contracts on the professional level are quickly dashed, and young men are left with the realization that they are sorely prepared for life in the "real world."  Well Bonzi Wells is not that guy.  He achieved considerable success in the NBA, and more importantly, he's a Ball State University Cardinal.  I'm sure that the only reason this ring isn't in his possession is that at one time he sold it to donate the money to charity.  In fact it was probably your favorite charity.

The '94-95 MAC champion Cardinals finished the year 19-11 overall, 11-7 in league play.  They earned a trip to the NCAA Tournament, where they were knocked out in the first round by Arizona State.  For his part, the freshman Wells was the second leading scorer on the team, averaging 15.8 points per contest, en route to being named MAC Freshman of the Year.  He would finish his Ball State career as the conference's all time leading scorer, before being drafted 11th by the Detroit Pistons and embarking on 10 year NBA career. 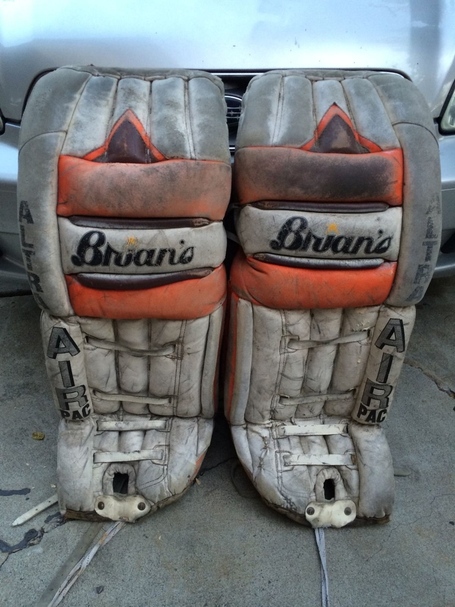 Sweet game used gear for the Bowling Green hockey enthusiast.  With Will Clarke in net, the Falcons went 14-6-2 during the 1994-95 campaign.  Clarke yielded 3.10 goals a contest.  What followed was a journeyman's career,  one that brought Clarke to the Tallahassee Tiger Sharks, the Dayton Bombers, and two stints with the Columbus Chill.  Today Clarke is a "Social Sourcing Strategist for Fortune 500 clients," which I'm sure is entirely more ruthless and cutthroat than minor league hockey. 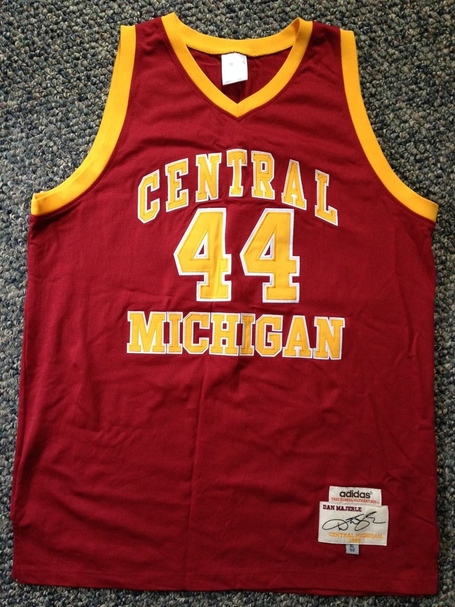 THUNDER.  Growing up a Phoenix Suns fan, I wore my purple Dan Majerle jersey to school every other day for about two years in the early 90's.  Majerle had 14 year NBA career with the Suns, Cleveland Cavaliers, and Miami Heat.  "Thunder Dan" was a three time All Star whose game expanded from rim rocking dunks to deadly outside shooting.  Majerle's number 9 was retired by the Phoenix Suns.

Before landing with the Suns in '88, Majerle was a three time All First Team MAC selection at Central Michigan.  He left the CMU as the school's second all time leading scorer, pouring in over 23 points a game his senior season.  Not game worn, but this is a throwback jersey from Majerle's Chippewa days, complete with autograph on the back.  Be wary though, the signature does not come with certification. 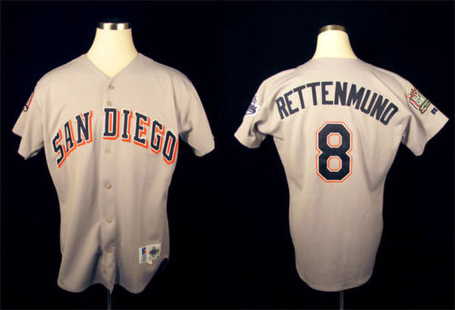 A three time World Series champion, straight out of Ball State University.  At BSU Rettenmund played both baseball and football, so good a football player he actually broke the school's all time single season rushing record and was drafted by the Dallas Cowboys.  On the diamond he was a two time first team all conference selection hitting .321 for his career.

In the bigs Rettenmund won two World Series rings as a player, with Baltimore in 1970 and Cincinnati in 1975, and one as a coach, with Oakland in 1989.  His playing days included time with the Orioles, Reds, Padres and Angels.  He hit a career high .318 with Baltimore in 1971, third in the American League.

This jersey is from his coaching days.  It was worn when Rettenmund was a member of Bruce Bochy's staff at the 1999 All Star game in Boston.  The post reads that this jersey, "shows wear consistent with that of a coach's jersey."  Which is to say it's pristine.  So with all the game used memorabilia out there, ask yourself who has a game used All Star jersey of a bench coach.  Pretty rare.  Does that mean its worth $750?

No it does not. 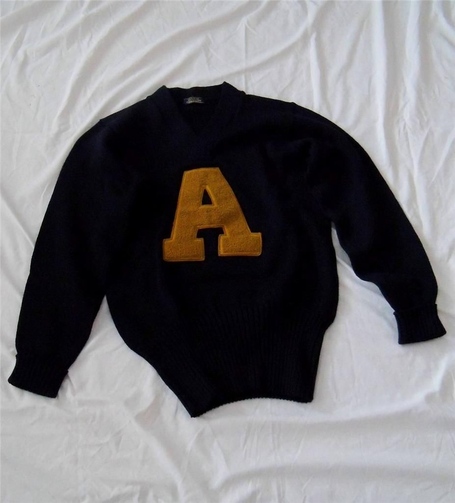 First revel in how badass the name Fritz Nagy is.  Regarded as one of the greatest scorers in Zips history, he was a charter member of the Akron Hall of Fame.  When he left Akron in 1949 he was the school's all time leading scorer, in just three years of play.  The seller reminds us that Nagy is still the 18th leading scorer in Akron history, a stat that should make the item instantly easier to sell.

So what you get here is Nagy's sweater and a blanket with his name.  The sweater by itself is pretty sweet, and a better find than the hideous stuff we've been showing you of late.  This was obtained at an estate sale, so don't expect any documentation or certification, though I'm unsure who would run around counterfeiting Fritz Nagy memorabilia.

Nagy did have a professional career.  He was drafted by the Pittsburgh Ironmen in the 1947 Basketball Association of America draft.  He would ultimately play just one season in the league, with the Indianapolis Kautskys, later the Jets.

I'll save you some time.  The Kautskys were named after the owner, local grocer Frank Kautsky.  It's nothing cool like a werewolf.  Sorry.