MAC Memorabilia For Sale On eBay: No Championship Rings This Week

No phantom Toledo rings this week. Give it a few days.

Share All sharing options for: MAC Memorabilia For Sale On eBay: No Championship Rings This Week

Game worn jerseys, magic cleats, some sweater like thing, and one of the most important moments in college football history!  No bids from us this week, Hustle Belt is saving up to buy the Clippers!  You should most certainly get your bid on though.  Your May 2nd MAC Gems: 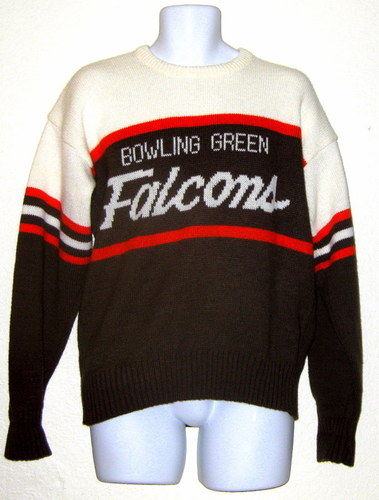 Is this old school enough to be considered "vintage?"  I'll let you decide.  Here's what I do know.  The website for cliffengle.com is "under construction," and I suspect  this has been for many moons.  Typing "Cliff Engle" into a search engine brings up links to various eBay pages, as well as postings on goodwill.com.  So it's hard to say if there is a market for these throwbacks, which hold a distinctive "college football" look, but it's a moot point.  By the time this article is posted the sweater will likely be in transit to Matt Daley. 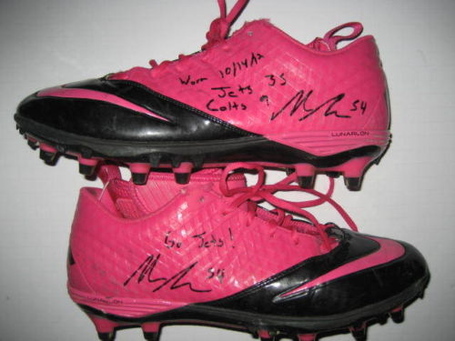 There's no good way to say this, so I'll just get it out of the way.  The pink thing in the NFL is too much.  We douse everything, EVERYTHING, in pink for a solid month.  That doesn't mean I am against breast cancer research, and that doesn't mean I discourage the NFL giving money to that cause.  Give a billion dollars, I think it's great.  I just wish they would follow the MLB model.  Take one day, cover everything in pink, play a full slate of games, and auction everything off.  The NFL goes overboard.  What do you think Jeff Tripplette's breast cancer awareness hat is fetching?  The answer is nothing.  He doesn't need to wear it for a month.

That said, up for bid is a particularly interesting and rare item.  These are the cleats worn by Nick Bellore.  Bellore was a three time All-MAC First Team selection at linebacker for Central Michigan.  The Chippewa went undrafted before signing a contract with the Jets in 2011.

These cleats were worn October 14th, 2012 in a game between New York and the Indianapolis Colts.  During this game, Bellore caught a 23 yard pass on a fake punt from quarterback Tim Tebow, aiding the Jets in a 35-9 rout of Indianapolis.  The catch was the first of Bellore's NFL career.

To recap:  First catch ever, on a fake punt, from the golden boy himself, Tim Tebow.  Also they're the pink breast cancer awareness cleats.  You want rare Chips fans?  Here's rare. 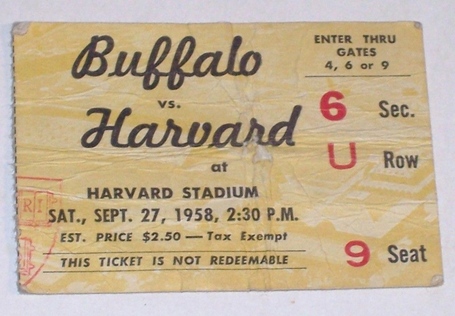 This week race relations and it's role in the sports world has been front and center.  Los Angeles Clippers owner Donald Sterling's disgusting views towards minorities have essentially vanquished any role he will play in the NBA and will eventually force the sale of the team that he has owned since 1981.  After a tape was released of Sterling making hateful and heinous remarks, things escalated quickly.  There was even talk of a boycott from the players.  Ultimately it didn't happen.  Decades ago in Buffalo though, it did.

The 1958 Buffalo Bulls were an offensive juggernaut lead by head coach Dick Offenhamer that finished the year 8-1, winning those eight games by an average margin of victory north of twenty a contest.  The Bulls were awarded the Lambert Cup, given to dominant northeastern squads.  This ticket stub is from the game against Harvard, Buffalo's first of the season, where the Bulls gritted out a 6-3 victory on the road.

As a result of their accomplishments in the regular season, the Bulls received an invitation to play in the Tangerine Bowl against Florida State, with one caveat.  Buffalo would only be allowed to participate if their two black players, backup defensive end Mike Wilson and starting halfback Willie Evans did not.  The team then unanimously voted to decline the bowl invitation.

It was 50 years before Buffalo was invited to another bowl game. 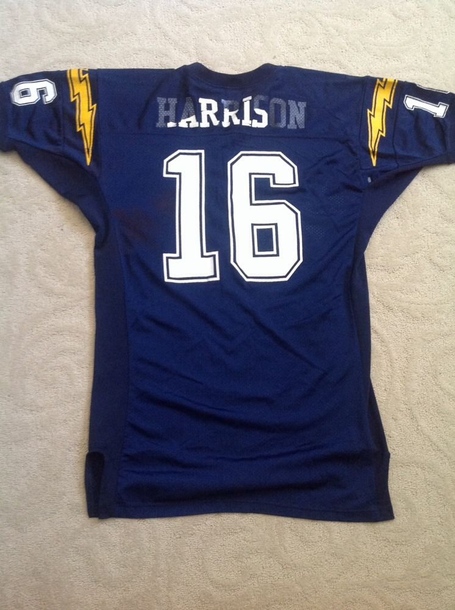 Game used jerseys on eBay are nothing new, but rarely do you find one of an athlete of this caliber.  More so, it's his college duds.

Off the field issues softened the interest of major programs like Notre Dame, Nebraska, and Ohio State.  Harrison landed at Kent State, where we would become a starter his junior year and lead the Golden Flashes with 98 tackles and 15 sacks in 2001.

Harrison would go undrafted in 2002, eventually spending years on practice squads, was cut three times, and played a season with the Rhein Fire of NFL Europe.  At one point Harrison considered retirement to work as a janitor or apply for his commerical driver's license.  In 2004, following a fourth cut from the Steelers, Harrison was given a shot after teammate Clark Haggans was injured in a weightlifting accident.

Today, Harrison is a five time Pro Bowler, two time NFL All Pro, and the owner of two Super Bowl Rings with the Steelers.  (No he didn't buy them off eBay.)  Harrison also holds the distinction of returning an interception 100 yards for a touchdown in Super Bowl XLII against the Cardinals. 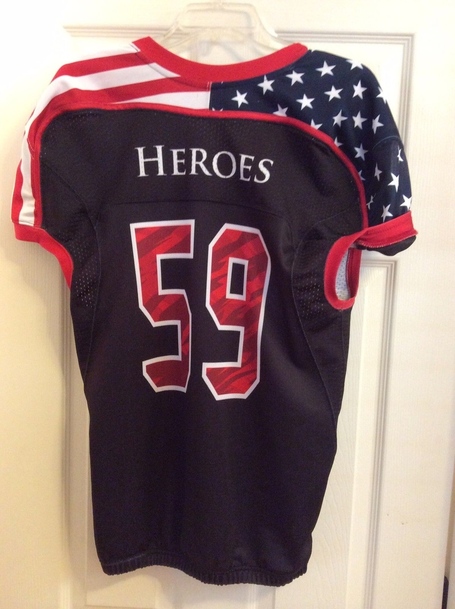 Do you remember this game?  That magical night when "Heroes" snapped to "Heroes" who completed a pass to "Heroes" for a heroic touchdown?  Northern Illinois wore these unis in a November 13th nationally televised game against Ball State a season ago, in a battle for the top spot in the MAC West.

In what can only be described as a ploy pandering to the American audience, the red, white, and blue clad Huskies pulled away from the Cardinals late, coming away with a 48-27 victory.  Heisman candidate quarterback Jordan Lynch threw for a staggering 345 yards, rushed for another 156, and blah, blah, blah, yeah he's the greatest.  Whatever.

This jersey was worn by back up center Mike Gegner.  Gegner played in four games in 2013.  Was Ball State one of those games?  I don't know, but the jersey looks pretty damn clean to me.

Yeah I'm still salty over the loss!  I know, I know.  How can a patriotic gesture from NIU be diminished to "a ploy pandering to the American audience?"  You're right.  It was a remarkable gesture from the Huskies.  One unveiled nationally, showing that more than football, more than the name on the back of the jersey, there is positively nothing more important than our freedoms.  This is a memento of that special night where the Huskies made a statement that resonated from coast to coast.

Still ended up on eBay though.