Buy the above, donate to NIU, be a hero.

Above are the words of Jamal Michael Barrow, perhaps better known as rapper "Shyne," perhaps better known as Moses Michael Levi since his subsequent incarceration and conversion to Hasidic Judaism.  It has been suggested to me that Mr. Barrow is not actually saying "MAC Gems" in this particular track, but instead, "Mac 10s."  I refuse to believe this and have elected to include his words in this week's MAC Gems installation.  Hustle Belt promotes non-violence, after all:

We've got some good stuff for you this week.  Balling on any budget.  You've got a ten?  We got something for you.  Got a few hundred and want to get ripped off?  Got something for that guy too.  For the love of god do not be afraid to buy some of this stuff and report back to us.  In my opinion this week may have the best valuable memorabilia.  Make sure you check out the NIU offering.  Your May 23rd MAC Gems: 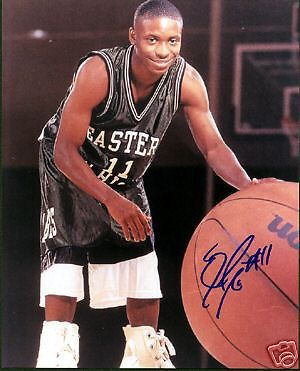 Most MAC and all Eastern Michigan fans will fondly remember Boykins.  The Cleveland, Ohio product holds the distinction as the second shortest NBA player in league history at 5'5" behind (or in front of) 5'3" Muggsy Bogues.   Boykins played in parts of 14 seasons with 10 different teams.  In 2004 Boykins scored 32 points for the Nuggets, becoming the shortest player to score 30 plus in a game in league history.

Before embarking on his professional career, Boykins was nothing short of a dominant MAC force.  He was a two time All-MAC selection and an honorable mention All-American in 1998.  He was second in scoring in the nation his senior year at 26.8 points per contest and left Eastern Michigan as the school's all time leader in total assists.  In 2011 the Eagles retired his number 11 jersey.

So why include an autographed picture of a MAClete that's not particularly rare and can be had on eBay for $34.98 or best offer?  Because you have to appreciate the sense of humor the guy must have if he signed a photo depicting a picture of a basketball being half the size of his body. 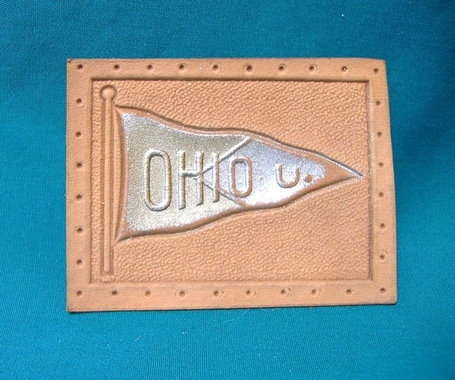 Ten bucks and you can pay homage to both Ohio University's history and your love of classic tobacco memorabilia.  What we have here is a leather pennant that was a common giveaway in packs of cigarettes at the turn of the century.  Typically you'd find them in packs of Mogul, Murad, Egyplienne Straights and Turkey Red (I'm a Turkey Red man myself).  Punch a hole in it and you've got yourself a pretty cool vintage key chain.

The seller also has what he claims is a "University of Miami FL Vintage Pennant."  The leather pennant is similar to this one, but red, and while it reads "Miami" there are no other geographical indicators.  You can view that one here. 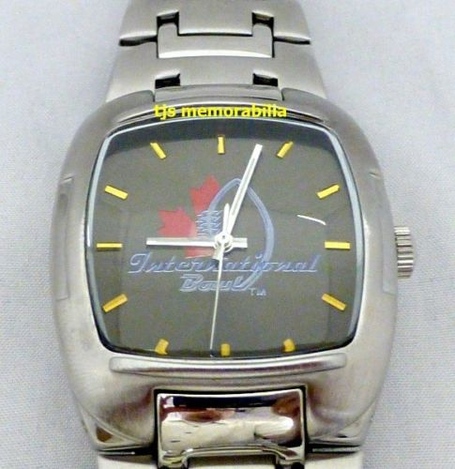 I'm sure I don't need to remind you what happened in the 2009 International Bowl but here's your refresher.  Buffalo out the the MAC, UConn out of whatever busted conference they were a part of at the time (it was the Big East) "earned" the right to travel north of the border to the Rogers Centre in Toronto to play in the International Bowl.  UConn would win the matchup 38-20, with running back Donald Brown being named MVP after a rushing for 268 yards.

What's for sale here is what the seller claims is a "2009 UCONN HUSKIES INTERNATIONAL BOWL CHAMPIONSHIP WATCH."  Buyer beware.  This guy has a lot of memorabilia on eBay and for all I know he has the appropriate documentation identifying this as a "championship watch."  Or maybe it was a watch that was actually given to all players for participating.  Or maybe it was for sale at the Rogers Centre day of the game to anyone who wanted a reminder of the only bowl game played outside the United States in 2009 when checking the time.  Either way, unless Donald Brown was wearing it when he rushed for those 268 yards, it's not worth the 300 bones the seller's asking. 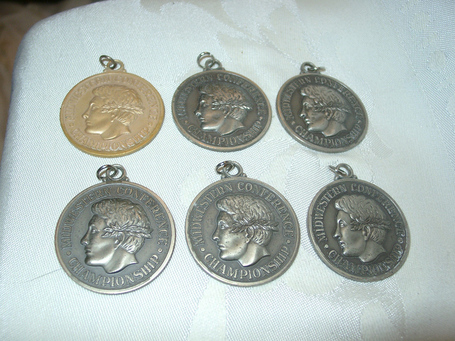 Perhaps the greatest MAClete you've never heard of.  Tim Gullikson dominated Midwestern Conference tennis, particularly doubles matches with his twin brother Tom, while at Northern Illinois.  Following their time at NIU, the identical twins continued their dominance.  They won 10 doubles contests together and were finalists in 1983 at Wimbledon.

Tim was the better singles player.  He was named Newcomer of the Year in 1977 and reached the Wimbledon quarterfinals in 1979.  In 1978 he won four singles and sixteen doubles titles.

Tim would really find his calling though as a coach.  Among others he coached legends Mary Joe Fernandez and Martina Navratilova.  In 1992 he would begin coaching Pete Sampras.  What followed is a legendary career that revitalized U.S. interest in tennis.  In just a year after hiring Gullikson Sampras would be ranked the number one player in the world.

Gullikson's story ultimately has a sad ending.  He was diagnosed with inoperable brain cancer in 1995.  He would pass away in May '96.

This MAC Gem is perhaps the best featured to this point.  The seller claims to have obtained the medals in LaCrosse, Wisconsin, Gullikson's hometown.  Seven medals in all are offered, although they contain no school names nor individual names.  One case does have a sticker that reads "Tim Gullikson."  If in fact these medals can be confirmed to have been given to Gullikson, 90 bucks is a steal. 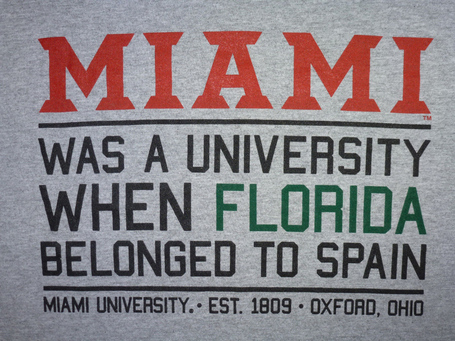 A little levity to close out this week's MAC Gems.  Maybe this is a t-shirt that is available in every Oxford bookstore and has been for a decade.  I just know that when I scrolled across it, it spoke to me.  Whether or not we should identify Miami as simply "Miami" or "Miami of Ohio" is a topic that's been discussed on more than one occasion in the Hustle Belt offices.  Me?  I don't give a damn if every other conference goes away.  I retain no interest in power conference athletics.  When I say Miami, I mean the RedHawks.  In fact if I hadn't gone to Ball State, I might actually buy this t-shirt.  I did go to Ball State though, and Keith Wenning threw 5 TDs on you boys.  In the first half.