MAC Gems: The Strangest Collection Yet

Share All sharing options for: MAC Gems: The Strangest Collection Yet

It's Friday and it's time to party.  Toledo, Buffalo, and Akron have what your need.  Eastern Michigan was not invited.  Your May 30th MAC Gems: 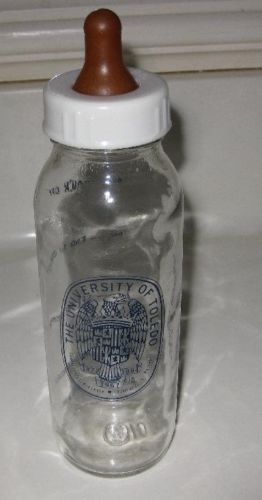 DRINK UP, TOLEDO FANS.  MAC Gems continues to celebrate the long line of bizarre Toledo related items available on the Interweb.  Up for bid for your favorite Rockets fan, who I'm sure is a drinker, is this novelty baby's bottle measuring game progress by ounces.  It's at $12.50 right now, six bucks shipping, auction ends Sunday.  The seller dates it to 1967.  In '67 it was definitely celebratory drinking for UT fans.  The basketball team wrapped up a 23-2 season with an invite to the NCAA Tournament before bowing out to Virginia Tech.  On the gridiron the Rockets dropped their first contest to Ohio, then rattled off nine straight wins for the first conference title in school history. 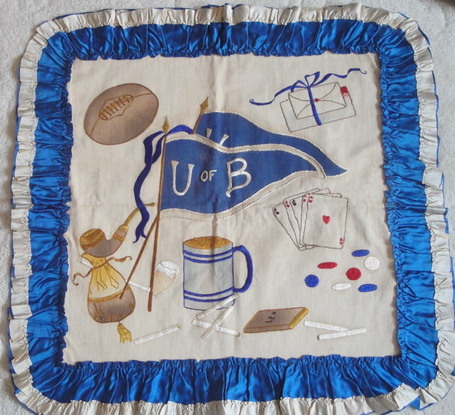 SMOKE UP BUFFALO FANS.  This is perhaps the strangest item we've come across to this point.  What we have here is a University of Buffalo pillow sham that the seller dates back to the 1920's.  There's a buy it now price of 100 bucks plus another 10 for shipping.  My best guess is the seller is taking a shot in the dark with the 20's because that's the last time it would be socially acceptable to produce such an item.  Along with Buffalo pennants, the artist embroidered a cup of coffee, a football, poker chips, playing cards, pipes, and cigarettes.  My lady friend seems to think this was likely made by a sorority girl for her fraternity boy who wanted to be reminded of all of his vices when he put his head down for the night.  I think that's a good enough back story.  We are totally agreed on one thing, though.  That is definitely a bag of heroin on the left. 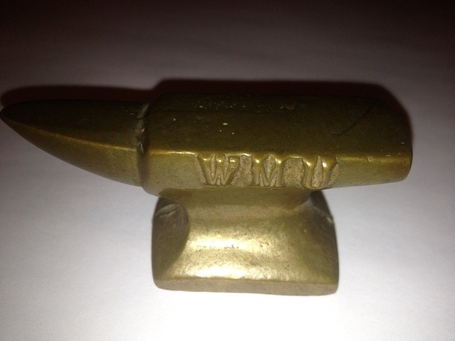 This is an anvil.

Now let's be clear, this anvil is not from 1903.  1903 is merely the year that Dwight B. Waldo established Western Michigan University, paving the way for famed oarsman P.J. Fleck.  The seller states "A comparative item could not be found!"  After some research I can confirm this.  35 bucks in total and it's yours.

Today anvils are not nearly as commonly used as they once were.  Their presence in today's culture is largely symbolic.  My best guess is that this was a gift to a longtime Western Michigan employee.  WMU fans should adopt the anvil as an unofficial mascot.  Put them on hats, t-shirts, make foam anvils to throw into the air following a score, etc.  Hey, it's no more ridiculous than what was introduced last year. 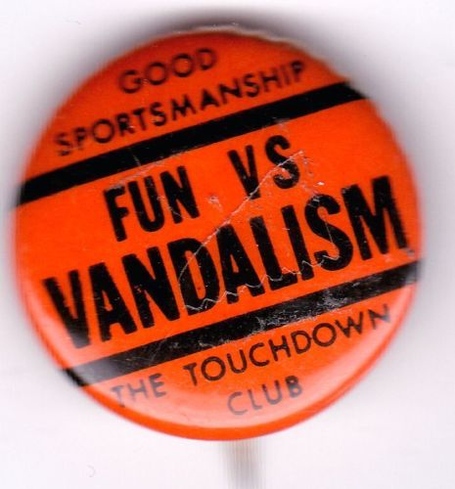 First your history.  The Touchdown Club was established as the University of Akron's booster club in 1941 in part to RAISE MONEY FOR RECRUITING.  So today there's not really a connection with the Zips, rather they promote youth activities in Summit County.

Ok, I don't know a lot about this campaign, but I feel compelled to point out one huge, glaring error with this button.  The seller writes this was an effort to curb vandalism during Halloween.  Fair enough.  I feel however that there could have been a better way to make your point.  For instance, "fun vs. vandalism?"  I think a lot of people participate in vandalism because that is what is fun to them.  Furthermore,

WHY IS "VANDALISM" SO MUCH BIGGER THAN EVERYTHING ELSE ON THE BUTTON?  Makes me want to go out and vandalize.  Twenty bucks and you can wear it out in Akron on Halloween smashing pumpkins.

Simply put, this is the gift you must get for the Ohio University graduate working hard to join the ranks of the employed who I'm sure will have a job by the end of the year.  In this story for some reason that graduate buys a piggy bank for $150.  I guess it's better than putting it in your bar/rec room as the seller suggests, as I'm sure it will be the first thing thrown when the Battle of the Bricks doesn't go your way.

1950 was a good time for Ohio football.  All-Everything linebacker Vince Costello led a team coached by Carroll Widdow who came over from Ohio State.  Widdow had winning seasons every year until capturing Ohio's first MAC championship in 1953.

We've had smoking, drinking, and vandalism.  Call this one greed.