We've got some killer game used hockey jerseys available for purchase this week.  That will put you back a few bucks.  Other than you can purchase all of these items together for less than $100.  Revisit Heisman candidates and Akron softball history!  Your June 13th MAC Gems: 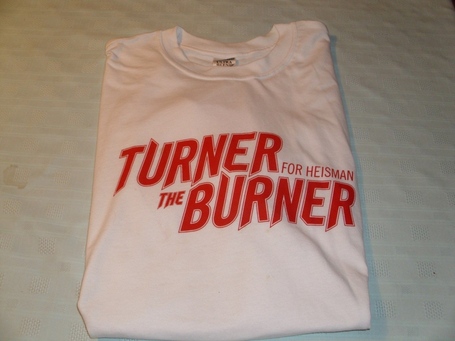 Before Michael Turner was released by the Atlanta Falcons for turning 31 years old, "Turner the Burner" generated the most Heisman hype for a Huskie since LeShon Johnson in 1993.  For twenty bucks you can relive those glory days with this Heisman promotional shirt from the 2003 season.  His junior year Turner rushed for 1915 yards with five 200+ yard games and five 5 touchdown games.  He would finish his senior campaign with 1,148 yards, second nationally to only Darren Sproles.  Turner was ultimately 18th in Heisman voting, behind eventual winner Jason White of Oklahoma.  Proving the weight the Heisman holds, White went undrafted, while Turner accumulated the most touchdowns in a career and most touchdowns in a season in Atlanta Falcons history.  Feel free to wear this shirt while you relive the glory days at www.turnertheburner.com. 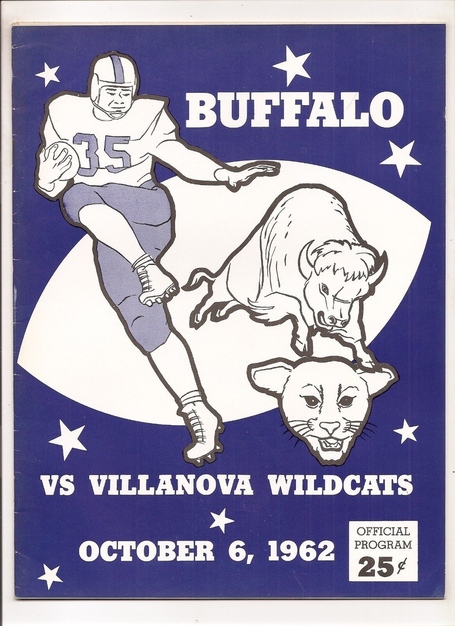 Game programs are no rarity on eBay or on MAC Gems, as we've featured them several times.  This one is not commemorative of an especially historic contest but the design is second to none.  I love program designs from the days of, "let's throw as many graphics related to this game on the cover as possible."  You get a Heismanesque pose from the Bulls, who to that point never had a Heisman winner, nor was there a candidate on the '62 team.  Most importantly however, you get what is clearly a Bull stomping on the head of a Wildcat.  Buffalo would finish the '62 season 6-3 as an Independent, but came out on the wrong end of a 36-6 decision against Villanova on October 6th.  15 bucks and you can add this to your collection. 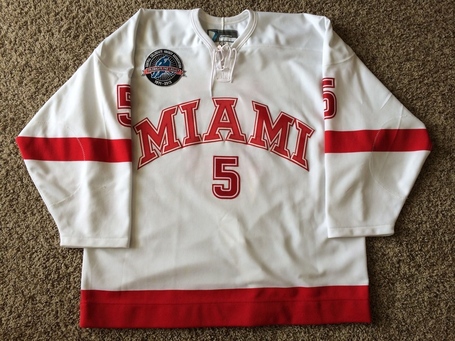 Three sweet game used Miami RedHawks hockey jerseys being sold as a set.  Adding these to your collection won't be cheap, presently the bidding is at $213.50, the reserve has not been met, and four days remain on the auction.  The seller seems to post Miami jerseys on eBay from time to time, and is moving these three "to acquire an NHL game worn jersey."  Chris Joyaux appeared in 35 of 38 games a season ago, tallying a goal and four assists.  Michael Findorff spent three seasons with the RedHawks, also bouncing around the NAHL and USHL.  Number 10 can be whoever you want it to be.  Because if you display it you're displaying the front of the jersey anyway.  I wonder how this guy gets all these jerseys.  Obviously by legitimate means. 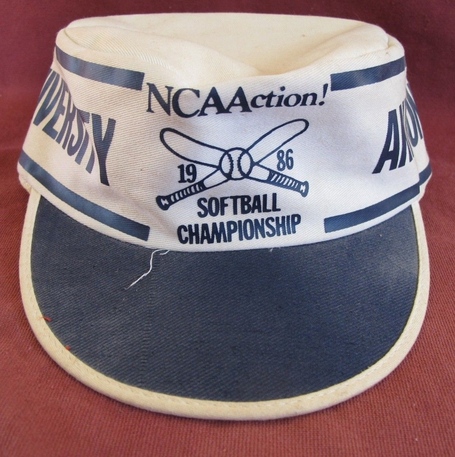 I know very little about this piece, but it keeps coming across my radar and I think you need to see it.  Before MACtion there was NCAAction!  I uncovered very little about the 1986 Akron softball squad before finally discovering that Akron University played host to the Division II Softball National Championship in 1986.  Undefeated Stephen F. Austin knocked off defending champion Cal State Northridge for the title.  That's not to say Zips softball is without its own history.  Akron reached the Final Four in 1985, and were National Runners-Up a season later.  That program notched 51 wins, the most in program history.  Pay homage to Traci Alcorn, Lisa Arvay and Dani Vance by wearing this gem to InfoCision Stadium next fall for just 35 BUCKS?!?! 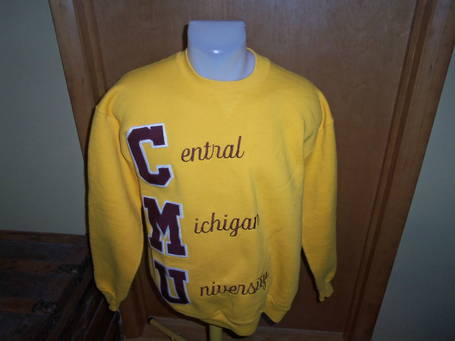 Yes.  This is the kind of deliciously hideous gear we should see more of at MAC games.  The crewneck sweatshirt is ultimately what every alumni will wear.  After you've retired the jersey.  After the Under Armour is no longer a viable option.  After you've come to the conclusion that you're not in fact an assistant coach, and not really a booster because you made a one time donation of 25 bucks, and therefore have put away the polo shirt.  What remains is the crewneck sweater.

Now most are not this ugly.  I will grant you that.  But that "Central Michigan University" can be spelled out in its entirety in that font is impressive.  I love that gold is the primary color (there's enough maroon stuff out there).  This is not unlike the sort of item you buy for an ugly Christmas sweater party.  You're not buying it for that, though.  You're buying it to wear to Chips games on Saturday.