Also known as "The Factory", the new gray turf is meant to represent that these Eagles are going to outwork their opponents on the field.

Leading up to Eastern Michigan's official announcement, news leaked by the Detroit Free Press caused a wave of jokes about the rumored gray field at Rynearson Stadium. Holding a press conference int he atrium of the Convocation Center to officially announce the new rendering, Athletics officials said why they chose to do this.

"It helps us build an identity that matches the toughness of our team and connection with our community," EMU Athletic Director Heather Lyke said . "This facility enhancement is an important brick in the foundation of Coach Creighton's vision." 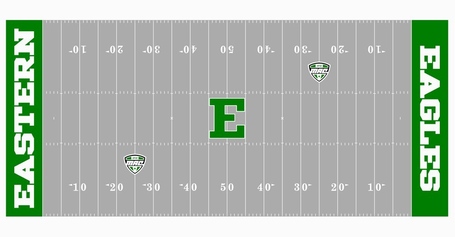 Construction for the new 48,340-square foot gray FieldTurf will begin in July and will be ready to be debuted on August 30, when the Eagles' face off against Morgan State in their home opener. Keeping the hash marks and numbers white, both end zones will be green with "EASTERN" in the north and "EAGLES" in the south in white text. But probably the best part about the new FieldTurf is that the Block E (not the curvy incorrect "E" that's on there now) will utilize all three colors on the 50-yard line.

Well, for starters, gray is not sexy. Nobody rocks the all gray turf for that sole reason. Boise State has "The Blue", Eastern Washington's field is red, Central Arkansas has purple and gray and Lindenwood-Belleville's field has the same scheme as UCA's, but it's red and gray.  "EMU Gray" is, essentially, going to be like Boise State's "The Blue".

Let's go back to Lyke's quote about Creighton. This field is going to be a visual building block for what Chris Creighton is trying to do at Eastern Michigan. Since hired back in December, Creighton has quickly become known for wanting to bring the very best out his players. He wants to make his players "E-Tough".

O- Obsessed with getting better

U- Unwavering in adversity

During the winter workouts back in January and February, Director of Sports Performance Ron McKeefery challenged this squad to outdoor practices, rather than being inside their indoor practice facility. Which, if you're going to be playing football in Michigan, you might as well learn how to deal with the snow. "We will meet you any time, any place" is the message that Creighton preached to his team, and he meant it. Mental toughness is one of the cornerstones of this football team, and he's making it known. "...even on a parking lot covered with broken glass."

What do you mean by "The Factory"? 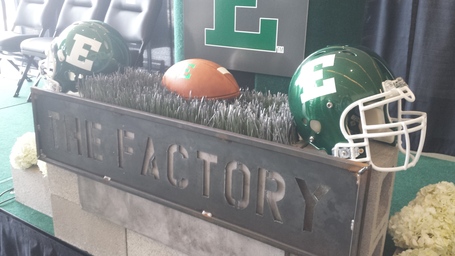 Creighton has previously said that he doesn't want to connect Eastern Michigan with Detroit, he wants his program to be connected with Ypsilanti. Detroit's 45 minutes away, but it's not far enough to truly distance yourself from it, let alone the whole southeastern region of Michigan.

Detroit has its problems, and there's no hiding it. There's no hiding that EMU football has their problems, too. But both are filled with hard-working citizens and community members. Which, at this time, seems like a great moment to share this Detroit-centered commercial.

"We are hard-working; this is a blue collar area" team captain Pudge Cotton said. "The gray field fits what our team is about."

Gray is not sexy, but neither is rolling up your sleeves and getting work done. Which reminds me of something former EMU quarterback Ron Adams told me in an interview I had with him a few months back when he talked about going to the California Bowl in 1987, when he rolled up his sleeves before running out of the tunnel, looking at his teammates saying, "It's gonna be one of those games, boys."

"I get that people are throwing stones at this program and that's okay," Creighton said. "We're not doing it for them. We're doing this because we believe in who we are... We're going to embrace it and bring it out."

Where did EMU Athletics get this money from?

Eastern Michigan receives compensation from traveling to schools like Michigan State, University of Michigan, Penn State, Ohio State. We've talked about this before.

"Like we're going to Florida, Old Dominion and Michigan State this year," Lyke said. "They pay us and that money goes into a Game Guarantee account. We're taking part of that money to help pay for the field."

Whatever. It still looks ugly.

Well, we don't know that yet. We just know what the field could look like. In some instances, the picture just doesn't do the actual product any justice. Kind of like the picture of your date that you took to the senior prom. Only time will tell if this ends up being attractive, but Creighton has already said that he doesn't want the facilities to be the front porch of a program. This "EMU Gray" isn't about how cool the color is or isn't, it's a visual representation of what this program has become.

"We're building something that's going to last, and it's not going to be the color that lasts," Creighton said. "It's who we are and our identity that lasts."