More Miami hockey swag, an unlikely bobblehead, and the only way to attend a Western Michigan formal event.  Oh, and remember the Rubber Bowl!  Whether you're looking burn 500 bucks or are down to your last twenty, we've got something for you.  Bid early and often MAC fans.  Your June 20th MAC Gems: 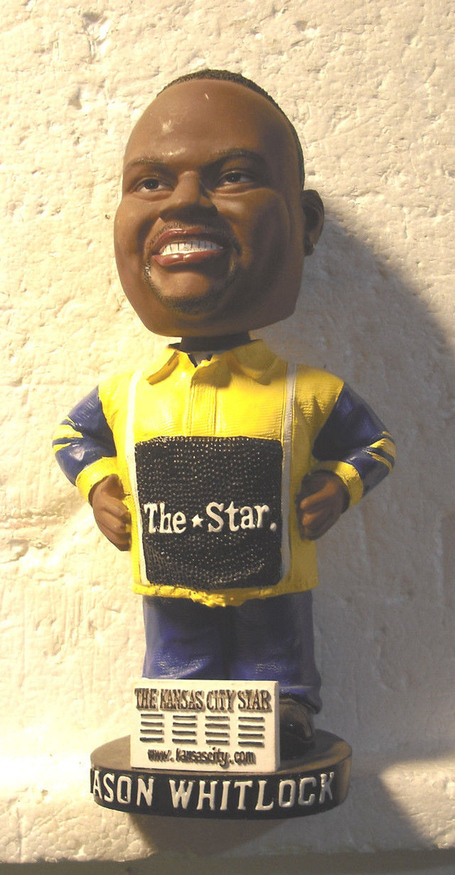 You love him, you hate him, it doesn't matter.  He was popular enough to warrant a bobblehead.  Whitlock, prior to his current job at ESPN, and prior to his prior job at ESPN, made his bones mixing sports and social commentary for the Kansas City Star.  Of course these opportunities were made possible because of his education at Ball State University, where he lettered twice in football, and graduated with a degree in journalism in 1990.  No bids, four days left, 11 bucks shipping.  Sky's the limit.  Or maybe a twenty dollar bill is the limit. 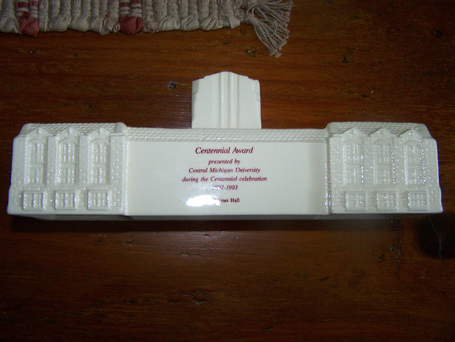 Ok, we're using the word "award" kind of loosely here.  Evidently people collect these things, and this is part of a set that contains other replicas of buildings on the Central Michigan campus.  This one reads that it was presented at the 1992-93 Centennial Celebration.  The building depicted is Warriner Hall.  Straight from the CMU website:

"Warriner Hall, Central's administration building and the most striking architecture on the campus, was built on the ruins of Old Main, Central's first building, which burned in 1925."

Here's what you're going to do.  You're a Central Michigan alum and for under 30 bucks all in, you're going to scoop this up.  Display it in your home, say you received it due to your contributions in (add field here) and dare people to challenge you.  This is your chance to be anything you want to be, and have the hardware to prove it.  Say you were in some sort of contest with Jason Whitlock for top journalist in the MAC.  I'll bet he doesn't have one of these. 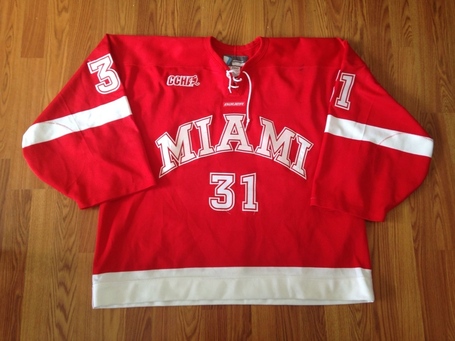 We featured a handful of Miami hockey jerseys last week, but the offerings keep getting better and can't be ignored.  This one is no joke and will run you just under 500 bucks after shipping to add to your collection.  Today Connor Knapp holds the distinction of being the ninth goalie dressed by the Buffalo Sabres for the 2013-14 season, an NHL record.  Knapp played one full game last season, Buffalo's last, losing to the New York Islanders 4-3 in a shootout.  Before the NHL Knapp spent four seasons with the RedHawks, and was named CCHA Best Goaltender for the 2011-12 season.  This jersey is from his freshman year, when he started 23 games and posted a 13-5-3 record in net. 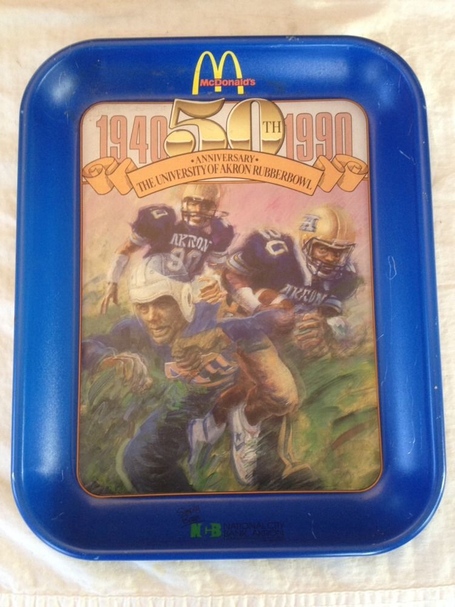 This gem has been on my watch list for awhile, and it took a nudge from Hustle Belt basketball editor Brandon Hickey (@hickeybuns33) to finally get it posted.  There are few college football venues more steeped in history than the Rubber Bowl.  For 68 years it played home to the Akron Zips.  Today Akron plays at InfoCision Stadium, which, let's say has a different ring to it than Rubber Bowl.  It was so big in fact that it was recognized in this piece of modern art by the golden arches for the 50th anniversary in 1990.  It's used, but it's also 20 bucks.  Buy it, clean it, use next football season watching Kyle Pohl drive the Zips to bowl eligibility. 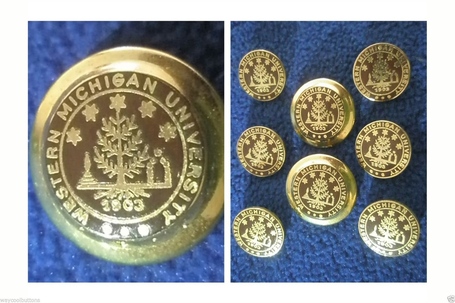 I don't know how much actual value this holds, but the seller is asking for $210 with free shipping, which sounds like a lot.  But if you're a Western Michigan football fan, who wants to make a splash (pun intended), this is the accessory you require.

Let me say a final word about the "boat rowing" jokes.  I've been reminded on several occasions that Western Michigan football is headed in the right direction.  That's fantastic.  It's good for WMU, it's good for the MAC, it's good for all the MAC's member schools.  PJ Fleck has built a recruiting class unprecedented in our conference and I think that is just the tops.

That does not mean however, that he's not goofy as hell.  It is time to stop defending the way he entered the MAC.  It's clownish, and that's ok.  Embrace the weird.  The Broncos can go undefeated.  They can play on the highest level in whatever the future of postseason will look like.  THIS MAN WON TWO NBA CHAMPIONSHIPS.

PJ Fleck could have come in hard nosed, all business, no fun, and stated "the only fun is winning."  He didn't.  He came creatively, he brought some innovation, and he's a goofball.  Own it.  Own it like the Inland Empire 66ers own it.

That feels like a weird tangent for a post about two hundred dollar buttons that go on a blazer.