We finally included UMass. You're welcome.

Share All sharing options for: MAC Gems: History, Hazing, and the Hoosier Beatdown

A whole new batch of gems to open June with.  We've got the requisite history lesson of course, as well as a look at perhaps the most important win in Toledo basketball history.  We also take a look back to the days where colleges all but encouraged hazing, a practice Hustle Belt does not endorse, but I think we should explore.  Welcome back to your favorite oasis bridging the gap between football and basketball seasons.  (Yes, I already forgot who knocked Ball State out of the MAC Baseball Tournament.  I think it started with a 'K.')  Don't worry, football season will be here before you know it, even EMU's.  Until then, your June 6th MAC Gems: 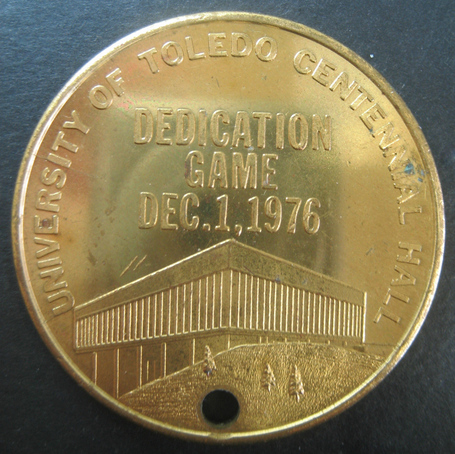 More stuff for the Rockets drinker.  The above coin was created to commemorate the first game at Savage Arena in Toledo between UT and the visiting Indiana Hoosiers.  Now, the flip side of the coin refers to the Hoosiers as the "University of Indiana."  Perhaps the creator was drunk on PBR, perhaps the fact that IU was referred to as "Indiana College until 1838 proved too confusing.  Either way, the seller didn't flinch at this error, as it is included in the description of the item.  9 bucks all in and it's yours.

The game would end up being one of the most significant in Toledo history.  The Rockets knocked off Bobby Knight's Hoosiers 59-57 in a contest I decided Thursday night was not nearly as close as the score indicates.  Indiana entered as defending national champions and riding a 33 game winning streak.  They left ready to drown their sorrows in PBR.  IU finished the season 14-13.  The Rockets, 21-6. 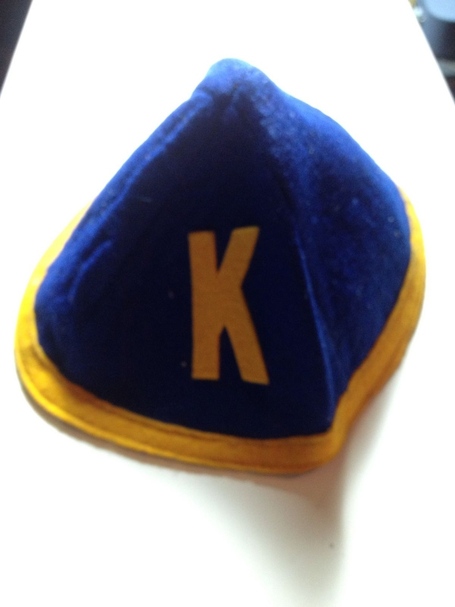 Ok, this used to be a thing.  At one time, get ready, freshman were actually required to purchase a beanie identifying their class.  Some universities required everyone wear the beanie with the freshman sporting a colored button to separate them from others.  Not every school practiced this custom, but in today's world where bullying, even among NFL players, is so closely scrutinized, it still makes you flinch.  That said, I think this item needs to be purchased by Hustle Belt and every new contributor should be required to take a picture with it on, making that their profile photo for at least a couple months.  No bids on this yet, five days left, we'll keep an eye on it.

Football and basketball were uneventful for Kent State in1964, with both squads finishing under .500.  The baseball team on the other hand, shined.  The Golden Flashes, led by Dick Paskert, captured the school's first conference championship, defeating Ohio 6-3 in a one game playoff.  KSU would bow out in the first round of the NCAA Tournament to the Minnesota Golden Gophers.  It would be 28 years before the Flashes won another MAC championship. 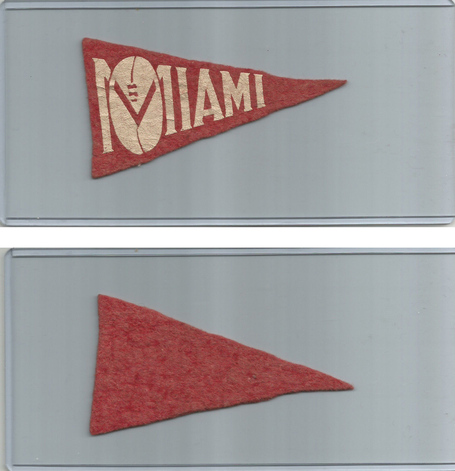 These old pennants are awesome.  I'm always shocked when something like this makes it 80 years in this shape.  If only the RedHawks program were that fortunate.  The 1936 Miami football team won the conference championship after finishing the season 7-2.  The '36 team included all conference guard Fritz Heisler, notable for becoming the second athlete named "Fritz" to be recognized by Hustle Belt.

After Miami, Heisler returned to Massillon High School in Ohio to work under his high school coach, the legendary Paul Brown.  Heisler followed Brown to Ohio State, before taking a break from football to defend some freedoms in World War Two.  After Heisler returned he found another job under Brown, this time coaching the offensive line of the Cleveland Browns.  He would retire in 1971, yet continue scouting with the Browns until 1976.  Heisler was inducted into the Miami Hall of Fame in 2006.

If you can't tell by the picture, this is a mini pennant.  25 bucks, free shipping, and it's yours.  For about 12 more dollars you can probably land this bigger pennant, from the 1950's. That said if you're interested in either one, you're probably a Miami grad and can afford both. 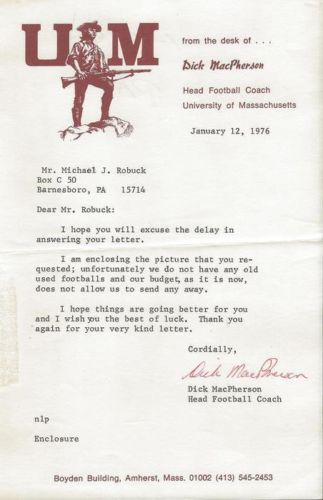 A memento from the glory days(?) of UMass football.  For 33 bucks after shipping you can be the proud owner of a letter from head coach Dick MacPherson to Michael Robuck, who evidently was having a run of bad luck in '76.  Today we would call that bad luck "being a UMass fan."

The 1976 squad got things started on the right foot.  The Minutemen played on the DII level in the Yankee Conference.  Massachusetts scored wins against Toledo, Maine, Boston, Rhode Island, and Holy Cross, before being shut out in the final two games of the season by New Hampshire and Boston College to finish 5-5 overall and 3-2 in conference play.  One can only hope they had enough footballs to finish the season, as the letter indicates a shortage.

Today MacPherson is an NCAA Hall of Famer who went on to lead the Syracuse Orange(men) for 10 seasons.  Perhaps his most notable game as head coach was the 1988 Sugar Bowl.  Syracuse played Auburn to a 16-16 tie.  Let that sink in.  I'm mildly surprised the Sugar Bowl still stands today after that atrocity. 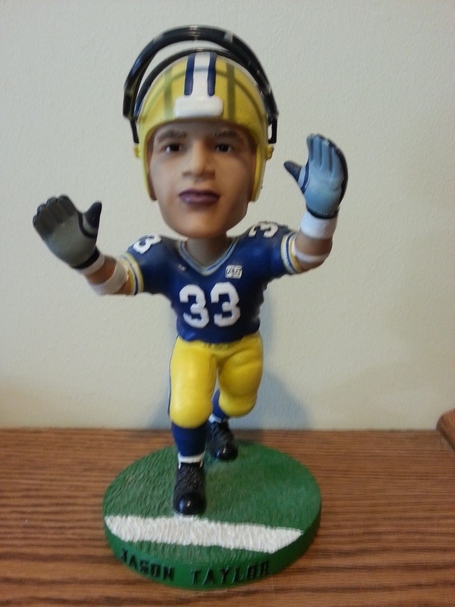 There's certainly no shortage of bobbleheads on eBay, and there might be more if I can't come to an agreement where to put mine in the new place with the lady friend.  (I understand not wanting to put up the Mike Napoli up, but the Mike Trout?  C'mon.)  What's a little more rare, however, is the college bobblehead.  This Jason Taylor likeness from his Akron days has an opening bid of 50 bucks, with a buy it now of 70, plus 7 dollars shipping.

Before becoming a legend with the Miami Dolphins, reaching 6th on the NFL's sack list, Taylor terrorized MAC offenses.  While also playing basketball for the Zips, the third round pick in 1997 was a two time All-MAC selection.  Taylor moved from weak side linebacker to defensive end as a senior where he really found his calling.  This piece was given out November 5th, 2004, the day that Taylor was inducted into the Akron Ring of Honor at the Rubber Bowl.  Taylor was just the third to receive this honor, joining former coach Jim Dennison and Chris Angeloff who died on the field during a game against Marshall.

Sports fans may be able to get away with this purchase.  Taylor finished second to figure skater Kristi Yamaguchi on Dancing with the Stars.  If your girl watches this, and you want to display a Jason Taylor bobblehead, this is the angle to play.  Now lest I be accused of being sexist, obviously dudes watch it too.  In fact it's the preferred television option of Hustle Belt's Bryan Vance.  You may tweet him about it at @BryanMVance.