MAC To the Future: Traveling Through Time To Find A MAC National Champion

Through the help of a football time machine, I've determined that the just about any MAC Champion from the past 17 years could have sent Les Miles and his 2007 LSU Tigers to the woodshed.

Share All sharing options for: MAC To the Future: Traveling Through Time To Find A MAC National Champion

Recently, I was perusing the college football aisle of Reddit. You may have heard of Reddit before. It's like the Wal-Mart Supercenter of message boards, and when it comes to college football, those fine Redditers sure know how to think up some interesting topics.

One such idea the /r/CFB users were discussing was how far back in time would one have to go in order for a current-day MAC team to beat a national champion.

The Redditers all agree, if we traveled back far enough in time the MAC teams of today would destroy the Armys, Alabamas and Notre Dames of the 1940s, 50s and 60s. The players are bigger, faster and stronger nowadays. Even with the rule changes to promote safety, the 2013 Akron Zips would dismantle Woody Hayes' 1954 Buckeyes.

But the idea got me thinking. We've had a lot of solid MAC teams as of late. Sure, we're also had some downright terrible teams, but the 2012 NIU squad was for real, even if FSU Twitter has convinced themselves they steamrolled NIU from the first kickoff. Let's not forget the 1999 Marshall team that went 13-0 and finished No. 10 in the final polls.

These were teams loaded with future NFL talent. Teams that by all accounts, could have held their own in many Power 5 conference (not to the tune of 13-0, but certainly better than Michigan has been lately. So I decided to hop into my football Delorean (a.k.a.WahtIfSports.com's College Football Sim Matchup tool) and find out for myself.

The idea was simple: Take the MAC Champions from the past 17 years (since the MAC Championship game debuted in 1997) and run them up against the BCS National champions since 1998 in reverse order until the MAC beats a team. To preserve randomness, I simmed all matchups once. The constants were that the MAC team was always considered the away team, but the games were always played on a neutral field in warm weather. The results, in some cases, were better than I could have imagined.

So how did the other teams fair? Well let's start with the reigning MAC Champions, the 2013 Bowling Green Falcons. 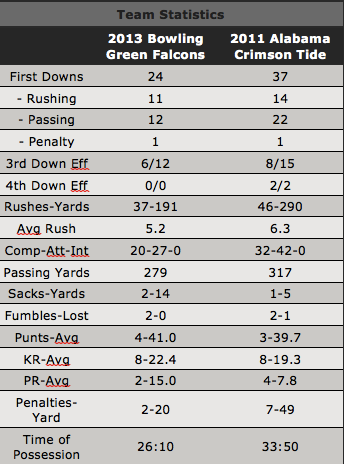 Matt Johnson and his winged mates shocked the MAC by emerging as an offensive juggernaut, stomping NIU in the MAC Championship and finishing the year 10-4 (7-1 MAC). Featuring a stout defense, and one of the nation's most efficient offenses, BG did OK vs the 2013 Florida state Seminoles (losing 31-17), got stomped by the 2012 Alabama Crimson Tide (losing 45-7) before ultimately winning a nailbitter over the 2011 Crimson Tide 48-45.

Travis Green went off, rushing for 185 yards and five scores on 20 carries, including a 70-yard touchdown to give the Falcons the lead in the final minutes of the game. He scored all but three of BG's points, and flashed his explosiveness that helped him finish first among MAC running backs for yards in 2013.

As mentioned above, the 2012 Huskies, despite an impressive run and an admirable performance in the Orange Bowl, lost to every BCS National Champion by at least a touchdown. Interestingly enough, the Huskies fell 12-3 to the 1998 Tennessee Volunteers.

The 2011 Northern Illinois huskies team (the Chandler Harnish edition) that went 11-3 (7-1 MAC) only needed to go back to 2010 to beat Cam Newton's Auburn Tiger national championship team 23-21.  Newton was absolutely shut down in this game, managing just over 100 total yards and only one score. Meanwhile, Harnish was picked off four times, but also managed to score twice, and ran for over 100 yards, as did Jasmin Hopkins.

The 2010 Miami RedHawks team (you know, the year Austin Boucher, not Zac Dysert, led the RedHawks to an improbable MAC Championship) also beat the 2010 Auburn team, 30-17. Thomas Merriweather had 141 yards and three scores on 18 carries and held off Newton (who combined for over 200 yards in this game) by controlling the clock. In fact, the 'Hawks controlled the pace of the game so well that Auburn didn't score a single point in the second half. 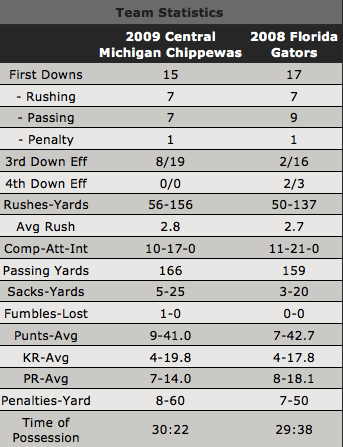 In 2009 Central Michigan, led by Antonio Brown and Dan LeFevour, just lost to the 2010 Auburn team on a late field goal. But they Chippewas did hold off a loaded 2008 Florida Gators squad, winning 17-14. Brown was all over the field, rushing for 66 yards and a score, and catching four passes for 89 yards and touchdown as he and LeFevour (who had over 200 yards of total offense) held off a late surge by the Gators, after taking a 14-0 lead into halftime.

Percy Harvin ran a punt back 73-yards for a score in the final minutes, but CMU, which held Tim Tebow to zero yards on 18 carries, ground out the clock for the victory of Urban Meyer's holy Gators. It was an ugly, sloppy mess of a game, but a win is a win, and LeFevour has proved he's a better (digital) quarterback than Tebow, so where is his ESPN broadcasting deal?

The last time Akron went to a bowl game was back in 2005 when the Zips (7-6, 5-3 MAC) won all the right games to beat NIU 31-30 in one of the most shocking MAC Championship games ever. Will the Zips carried the momentum from that big win in Detroit into a matchup with the 2007 LSU Tigers.

Brett Biggs (you remember him, don't ya?) was a workhorse in the Zips 24-20 win that featured three unanswered Akron scores in the final 19 minutes of action. biggs carried the rock 35 times for 146 yards and helped Akron hold a 33:18-to-26:43 time of possession advantage. The Zips' stingy defense held LSU to 3-for-15 on third down conversions, and kept LSU's ground game from ever taking off, while bringing glory to the Rubber City.

Poor Les Miles suffered defeat at the hands of another MAC team when the 2004 Toledo Rockets handed his Tigers a 41-23 beatdown. Bruce Gradkowski led the way, outdueling Matt Flynn and tossing for 425 yards and four scores in the win. 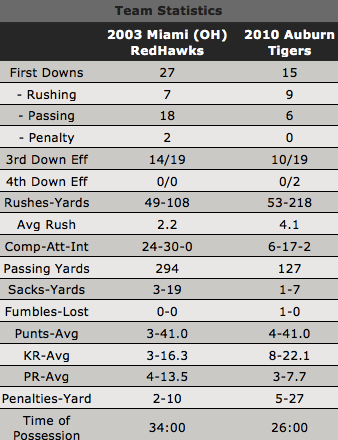 Big Ben Roethlisberger, who led Miami to a 13-1 (9-0 MAC) record and a No. 10 overall ranking in the final AP Poll of 2003 continued the trend of MAC quarterbacks embarrassing SEC defenses when his 'Hawks squad beat Superman himself, Cam Newton, and the 2010 Auburn Tigers (Are you sensing a trend here yet) 42-12.

The final 16 minutes of regulation were all-Miami (really the whole game was all-Miami) as Big Ben for four unanswered scores (five overall) and 294 yards in the game. Newton was downright awful against the 'Hawks stingy D, throwing for two interceptions, and completing just six passes on the night.

Now we come to the last of the great Marshall teams, the 2002 Thunder Herd squad. 2002 was the year in which Leftwich's most famous moment occurred. Plagued by shin problems all season long, Leftwich delivered a gutsy performance on the road against the Akron Zips in a game in which he was literally carried down the field by his offensive lineman.

After healing somewhat down the stretch of the year, Leftwich and the Herd pulled out a double-overtime win over the 2002 Ohio State Buckeyes, 51-44. Down 37-21 with four minutes to go in regulation, Leftwich delivered another Herculean effort, willing the Thundering Herd to a pair of scores in the final 30 seconds, converting the 2-point conversion both times and sending it into overtime.

In OT, Leftwich threw for two more scores, bringing his game total to five (with 431 yards) and outlasting the Maurice Clarett-led Buckeyes.

In 2001 Toledo once again handed the 2007 LSU Tigers a loss, this time winning 43-10 behind the legs of Chester Taylor. Taylor carried the ball 39 times for 212 yards in the game, managing just one score one the ground, but added another one and 45 yards receiving.

LSU's nightmare continue when the 2000 Thunder Herd squad, Leftwich's first season as the starter, dismantled them 37-10

Speaking of Marshall, in 1999 the Chad Pennington led Herd (13-0, 8-0 MAC)—arguably the greatest team in MAC history—delivered the best performance of all: beating the 2013 Florida State Seminoles 36-24, ending the game on a safety. Pennington was a wizard, throwing for 346 yards and three scores, and orchestrating an offensive attack that took a commanding 31-10 lead over the Seminoles early in the third quarter. Five Herd players scored in the game.

Of course, this is purely hypothetical nonsense. But what's that saying? A win is a win? Hey, I'll take these.