We still don't know what DMU's mascot should be, but we'll figure that out after a few nerdy simulations.

For the record, I do not have a life. I do not want friends. I don't want to go outside. I do not want to find out if there is life on Mars because I don't even want to get to know people on Earth that are outside "having a life."

But I am not a student of Directional Michigan University. And since there is no DMU, there is no DMU football team. But this is the internet where all things are possible. If we can have Mid-American Conference champions beat a team coached by Les Miles, then I can make DMU happen.

First, let's meet the team. I've taken the best players from all Central, Eastern and Western Universities from 2013 and let WhatIfSports.com's simulated value handle everything else. I feel guilty for leaving so much of this up to that value because Cooper Rush is DMU's starting quarterback.

I'm sure everybody's going to have their problems with this. Corey Davis was apparently the best DMU receiver last year, Tyreese Russell isn't as good as Western Michigan's backup tight end, and again, Cooper Rush is starting over Zach Terrell.

Oh well. It's the nerds' world and we're just living in it.

So now it's time to take this team to the promise land: Ford Field.

Hmm, but first, I should make a schedule. But I haven't been to Office Max lately because, well, I'd have to drive there. My car's outside. Not a fan of the outside. Then you've gotta interact with the cashier and just not worth it really. I'll just wing it as I go.

First game, had to get that gimme win. Navy brings people to the stands, right? And No real reason for why I chose the 2000 team. As an EMU fan that knows what bad football looks like, I can confirm that Navy just sucks, so it wasn't hard to find a year where they sucked, because well, yeah.

I wanted to find a Michigan team that last won the Rose Bowl to simulate a game against, but that was way too far back in history and this site doesn't go too deep into the history books. But in 2007, Meeshegun lost in the Rose Bowl to USC. That was the last time they went to the Rose Bowl. That's sad. Those guys suck. ESPECIALLY SINCE THEY LOST TO DMU MWAHAHAHA!

Bronson Hill had 132 rushing yards while Mike Hart only had 100? Pff. Weak. Chad Henne threw a pair of interceptions while Cooper Rush is over here flexing with a pair of touchdowns. Henne's backup had to get into the game. That's so embarrassing. I'd hate to be a Michigan fan right now. You people suck. First Appalachian State, then this? Ya'll should be ashamed and burn all of your "Go Blue" hoodies. Don't worry, your little brother is up next. 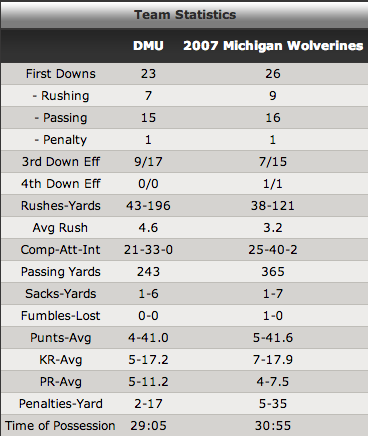 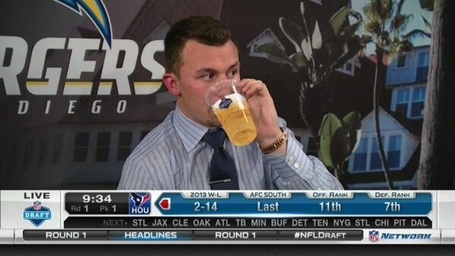 Bro, for real, bro. DMU beat Heisman-winning Johnny Manziel at his own game, video game football. Jonathan Paul Manziel went 13-for-20 for 157 yards and a touchdown, but Cooper freaking Rush had 21 completions for 339 yards. Now I'm confused but this simulation thing is awesome and we're gonna win it all. We now have the most elitest of elitist MAC fans. It's ugly but at least we're kicking ass and taking names.

Rush has got to learn how to not scare me. Sure 305 passing yards with three touchdowns is good and all, but four interceptions is not acceptable. Granted, you beat a very good Miami team that pulled one helluva good upset against NIU at Ford Field, but man, don't scare me like this.

Titus Davis outperformed by his little brother, yet again.

Against an undefeated Marshall team that finished in the top 10 of the AP poll, I'll take it. 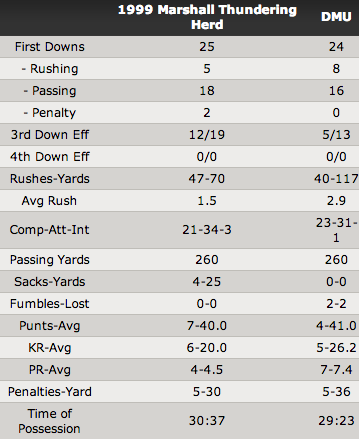 I just beat two MAC Champions, a ridiculous Aggies team, and Michigan (haha). This is too awesome. DMU is awesome. Where can I apply? We deserve to be elitist fans. I'll get a tattoo of DMU's mascot, whatever it becomes.

Voncarie is an absolutely beautiful first name to give to your child. Kudos to the Owens parents for doing this. I don't have a lot to say about this one. It's a weak Ohio team. Sure Kalvin McRae ran for 108 yards, but Hill had 110 with a touchdown.

When you mess with the LeFevour, you get the horns. Or something like that. But Rush wasn't that bad in this one. Dan was obviously the better quarterback going in, but they put up similar numbers.

Corey Davis had more than double the amount of receiving yards than Titus.

This is not good. For the love of Enos, will you please stop throwing so many interceptions, Cooper? Four stupid interceptions? What the hell, man? This is a losing streak. We're on a losing streak. I can handle a loss to LeFevour, but not Greg Jennings, who had less receiving yards than both the Davis brothers had (which, Titus wins this round).

What the hell is this? You're absolutely kidding me, right? Hill and Lavallii rush for 148 and 100 yards, respectively, and they can't even beat the shittiest of shitbird teams? I can beat Johnny Manziel, but I can't beat the '09 Alex Gillett? We beat those busters in Ann Arbor, but not the first EMU team coached by Ron English? This is a team that let up 276.8 rushing yards per game, but somehow 331 rushing yards just wasn't enough. 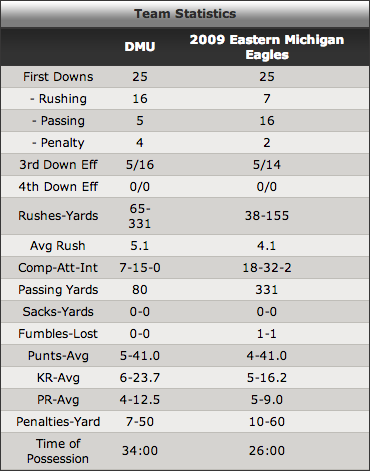 Shit. I forgot Chester Taylor went to Toledo. Like just completely forgot about that. Oh well. I deserved this. 175 rushing yards by Taylor? Yup. Totes deserved it. But why the hell am I on a losing streak? How did I beat Johnny Manziel and lose to Chester Taylor? Is this what rock bottom feels like? I still can't believe I lost to the 2009 EMU squad. To hell with it.

Thankfully, this stupid season ends on a good note. That losing streak was outrageous. Chandler Harnish was held to 23 rushing yards, which is always a good start to beating these puppies. But Chad Spann still won the game MVP, and rightfully so. 135 rushing yards with a pair of touchdowns, and one of those was for 51 yards.

I know, I wanted to take this team to Ford Field, where the fan-favorite doesn't always end up winning. The Directional Michigan University just went 7-5 in its first year of existence. That's good enough for me. That's bowl eligibility. Let's go to the Bahamas, damnit. I don't need a stinkin' game at Ford Field in the MAC championship.

At DMU, we thrive to settle.