With questions developing about the new 13-year television contract with ESPN, Commissioner Steinbrecher talks to Hustle Belt on the details of the contract, who knows what and what's on the horizon.

Earlier today, I spoke with Mid-American Conference commissioner Jon Steinbrecher, who assured me that there is no level of secrecy that exists between ESPN, the conference and its member schools in regards to the new television deal signed six weeks back.

Last week, the first new details of the 13-year mega-deal emerged as basketball season inches closer, with over 100 basketball and Olympic events coming to ESPN3, all of them based out of Buffalo, Central Michigan and Northern Illinois.  But questions developed when it was revealed that member schools did not have a copy of the new television deal, and whether the institutions were all in the loop about the new media rights deal. 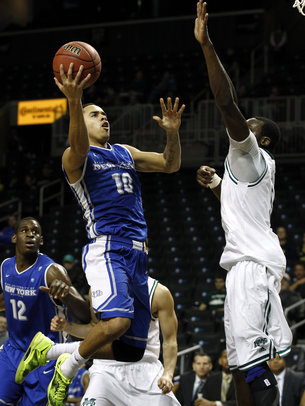 We're locked into this thing for 13 years.

"There is no secrecy here," Steinbrecher said.  "I can't think of many, if any, contracts that are held by the schools themselves."  The Commissioner said that the previous contract with ESPN was never distributed to the MAC institutions, and that this is "standard operation procedure" in regards to college media rights deals.

But with each school's media departments needing varying levels of improvements to meet ESPN standards, should the schools have the parameters of the deal in house?

"All of the schools were consulted throughout the process and approved," said Steinbrecher.  Steinbrecher said that the process of updating their media departments varies individually, and could not comment on what each school has done so far.  As most predicted when the news came out, Buffalo, Central Michigan and Northern Illinois were ready to take on the first wave of ESPN broadcasts this year, or needed minor upgrades compared to the rest of the conference.

Assistant Commissioner Ken Mather told me that each school provided the conference with an audit of their department.  ESPN then sent representatives to each campus to determine which universities would start the ESPN3 coverage this year.  Steinbrecher added that this process began in the late spring of 2014, and they will re-assess the remaining nine departments in the coming weeks to determine what the next steps will be for 2015-2016.

Steinbrecher called the first four years of the new ESPN deal (this year being the first) as a "self-production portion" of the contract, with the conference and schools working with each other to get their production capabilities to ESPN level.  At least three schools will be worked into ESPN3's coverage each year over the next four years.  The cost of that is handled by the conference and the individual school.  ESPN is not paying for any of the media department upgrades.  "ESPN is investing in us," Steinbrecher said.

Steinbrecher declined to comment on how much has been spent so far, as said that any of the dollar amounts that have been mentioned publicly in regards to the deal are "purely speculative."

There was never a possibility to bring all twelve schools into the ESPN3 contract immediately, the Commissioner said.  The contract was discussed initially "as a phased-in roll out."  Steinbrecher would not rule out accelerating that plan if the circumstances allow.

Steinbrecher did clue me in that more TV news will be coming in the near future, as the conference is finalizing at least one deal to sub-license more sports coverage this season outside of its ESPN deal.  The Commissioner would not divulge which network or networks he has been working with, but did say that the new coverage would be on a strictly regional basis this season, with more exposure for other national coverage possibly coming next year.

These agreements can be struck in a number of ways, but ESPN is very much involved in these discussions and sometimes initiates them.  The conference and other networks can also begin talks; Steinbrecher admitted that he has done so already.  As for a possible timetable on an announcement of more television coverage: