The Cowboys had an up-and-down season last year, and look to rebound off of their year-end momentum.

The Oklahoma State Cowboys did not have a great year by their standards last season. Injuries and a tough schedule really did the 'Pokes in,and they finished with less than eight wins for the first time since 2007. The Cowboys look to pull off a TCU and go from near the bottom of the Big XII to a main contender, and they certainly have the tools to do it. 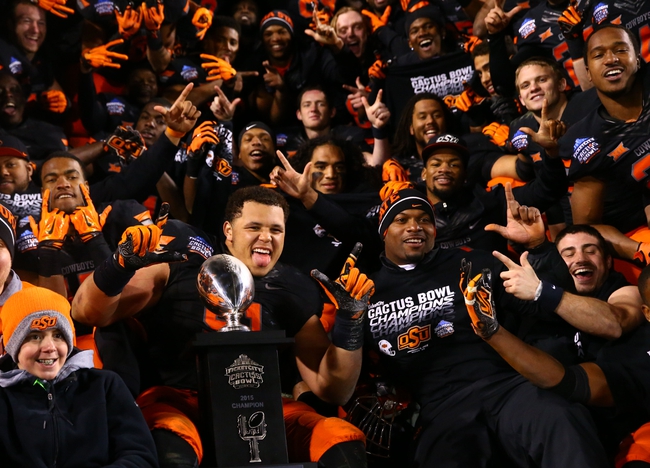 The Cowboys are a loaded gun on offense (pun intended.) Young field general Mason Rudolph will be in control of the offense full-time this season after admirably replacing something called a Daxx Garman last season due to injury. The Cowboys came alive under him, as they salvaged the year under his command.

Rudolph will have plenty of weapons to throw to, as nine out of ten of OK State's pass-catchers return from last season. They'll need every receiver they can get; last season, nine players had double digit receptions and triple digits in yards. with seven of those players scoring at least one touchdown. In order to keep pace with the likes of TCU and Baylor, they will have to run deep, and this amount of firepower will certainly help.

Rennie Childs will most likely be at running back when the season starts, as Desmond Roland has graduated. Childs was third last season in rushing yards, carries, and second in rushing TD's (behind Hill and Roland in all categories.) Childs will have ta lot of work to do in order to produce any bit of a threat; the Cowboys were 102nd in rushing yards with an average of 136 yards per game.

The defense had a bit of a time stopping a good offense, and in the XII, there are plenty of those to spare. They gave up 31.2 PPG, good enough for 94th. But last year allowed their inexperienced players time on the field, creating a vast of riches for OK State. A big breakout candidate certainly has to be Emmanuel Ogbah, the hard-hitting and explosive end that counted 11 sacks, 17 tackles for loss, and ultimately won the Big XII Defensive Lineman of the Year Award last season. The linebackers, led by senior Ryan Simmons, runs three deep and create havoc on the ball. The secondary has also proven to be a solid group, and should cause problems for the Chippewas.

The one specialist to look out for from Oklahoma State is Lou Groza Award Watch Lister Ben Grogan, who converted 22 out of 28 field goal tries last season, and is automatic from XP range (41-41.) There are no current players listed at punter or returner as of this moment.

Oklahoma State will look to get their season off to a blazing start vs. the Chippewas on a Thursday night in September. It should be fun.