Joe Moorhead is coming to Akron this season and bringing his high-powered offense to the MAC.

One of the things that separates him is his consistent ability to generate points everywhere he's been, and a big part of that is the success his teams have had with the RPO.

Today we're going to dive into exactly how he teaches it, how defenses have adapted, and what to do when everything doesn't go according to plan.

In theory, the concept of the RPO is simple: Figure out where the offense has a numbers advantage and get the ball to that spot.

In practice, it's not always that simple.

Even if all you're doing is trying to run up the middle against a light box or throw a pass when the defense is packed in tight, if you don't have a very clear process that simplifies things for the quarterback, you're going to get him thinking too much instead of playing.

For example, a lot of coaches want to run the ball when they have a numbers advantage in the box. This is a pretty good idea, but how do you go about teaching that?

Do you want your quarterback to physically count each player in the box? Not likely.

That play clock ticks down faster than you think it will. If you're trying to go fast on offense, it's a pretty inefficient way to get it done.

Realistically you're going to have limit the quarterback's field of vision. You have to put blinders on him and force him to only focus on a couple of things. That's what Joe Moorhead's RPO progression is designed to do, and that's what we're going to talk about today.

Joe Moorhead has a very simple process for the QB when going through his pre-snap reads.

Coach Rich Hargitt has put together a really interesting video on how Joe Moorhead reads the RPO, which you can see below. For those of you who don't want to watch a video, I'll summarize it with a few bullet points.

For those of you who didn't watch the video, here they are:

If No - Move to the next step

2. Are there any issues with pressure or a loaded box?

If No - Move to the next step

4. Is the Read Defender in position to tackle the ball-carrier at or near the line of scrimmage?

If Yes - Perimeter/Throw/Pitch (Depends on concept)

If No - Middle Run/Dive/Keep (Depends on concept)

Let's take a deeper dive into this process with some examples below.

The "Free Access" throw is another word for a look based off of a defensive alignment pre-snap. This is usually not connected to the primary "RPO" read and is located on the opposite side of the formation, so that the offense has the ability to threaten both sides of a defense.

The offense is running a quarterback draw RPO, and the QB would be reading the circled linebacker in the box on this play to make his decision. He's either going to throw the flare screen out wide or if the linebacker chases the throw, he'll take off into the gap where the linebacker used to be. 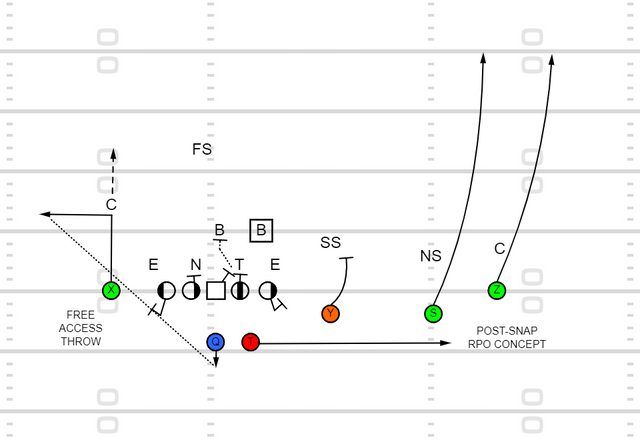 But before he bothers with all that, the defense gives him an opportunity for a free gift to the boundary. The corner is playing soft and the safety is starting to cheat more to the trips side, so the QB peaks at him after he takes the snap to confirm that the corner is back pedaling, and then he takes the easy completion.

As Coach Moorhead says, "if someone gives you a free gift, unless it's in recruiting, you should take it."

If the "Free Access" throw is NOT available, then the quarterback moves to the next step.

2. Look for Pressure or a Loaded Box?

At this point the QB needs to move on to the next step in the process, evaluating the box and making sure that there are no issues with pressure, or if the defense is just putting too many guys in the tackle box to make the RPO work.

Moorhead wants his QBs to have the ability to change the run scheme to a standard dropback pass protection scheme in case of heavy pressure. This is not just because the defense may bring too many defenders, it just might bring defenders who are unaccounted for in the original blocking scheme. This can be a good thing, since the pass concepts can come uncovered right away, and at that point it's up to the quarterback to get rid of the ball in a hurry.

This is where the nuance comes in, because the pressure may not always be apparent to an outside observer. Every defense has its own style, and the only way a quarterback will be able to sniff this stuff out is through intense film study from week to week.

Other times, the QB may see pressure, but decide to keep the original run scheme on and just get rid of it in a hurry. Running a draw provides an opportunity to keep things simple.

In this example, the offense has a QB Draw RPO called, but the outside linebacker is starting to creep up and show the potential of pressure. 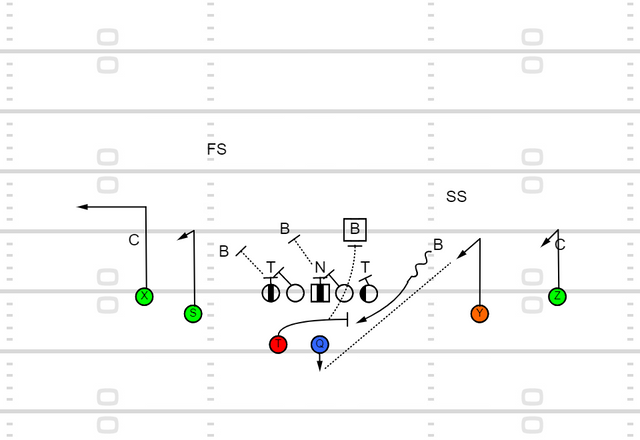 The QB doesn't need to change the protection, because the draw concept is going to keep all the down defenders blocked. Instead, all it does is make the decision easier, since the blitzer leaves the slot hitch open and allows for an easy completion. The safety is playing over the top, but can't take away the underneath throw at the same time, which allows for the catch.

The back next to him in the backfield adjusts and picks up the blitzer instead of climbing to the inside linebacker, which saves the QB from a hit and gives him enough time to hit the open man.

The key here is that even if the quarterback decides to change the protection, the pass game routes are still unchanged. Most of the RPO routes in this scenario are some sort of quick game concept, which are perfectly designed to get the ball out of the quarterback's hands in a hurry, so there's usually no need to change them.

But what if there's no free access throw available and no issues with pressure or a loaded box? The quarterback moves to the next step...

This part is pretty straightforward, but with all the chaos going on before a play, making sure your guys are lined up, trying to see the whole field, it's important to stress this with your quarterback, especially a young quarterback who is just now starting to grow into the position.

Not only that, but defenses these days aren't exactly doing anything to make this job easier. In the age of the no-huddle, multiple-tempo, RPO offense, defenses have to be creative. The guy you're reading may not start or finish where you expect him to be before the ball is snapped, so just as with the previous step, studying film and being ready for disguised alignments is key.

4. Can The Read Defender Make a Play?

Now we get to the "option principles" part of the process.

The ball is snapped, and the quarterback has his eyes on the read key, and makes his decision based on this question:

Is the read key in position to tackle the ball carrier at or near the line of scrimmage?

Whether he gives or keeps the ball depends on the kind of RPO that is called. Let's take a look at a couple of examples to demonstrate the difference.

On this first play, the quarterback is reading the unblocked defensive end. It's pretty straightforward, because if that defensive end can make a play on the ball carrier at or near the line of scrimmage, the QB should pull the ball.

If the end shoots straight up the field and creates a ton of space, then he hands it off to the back up the middle and the offense should pick up some good yardage there. 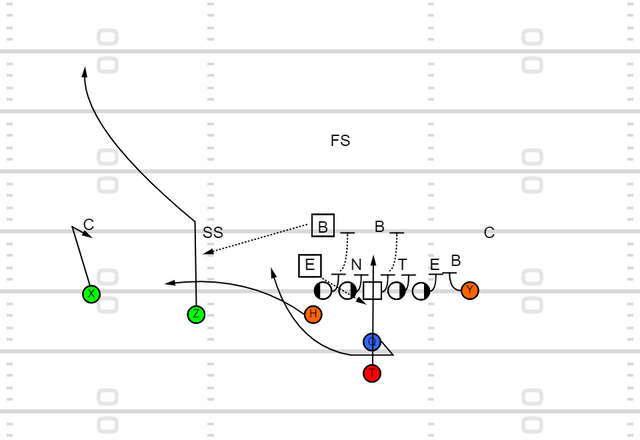 That's a pretty standard inside zone read RPO, with a second read for the QB on the flat if it comes completely uncovered once he keeps the ball.

Now let's look at another RPO, this time where the QB is reading the inside linebacker.

If that linebacker comes up to the line and is in position to tackle the back, the quarterback is going to throw the glance route over his head. 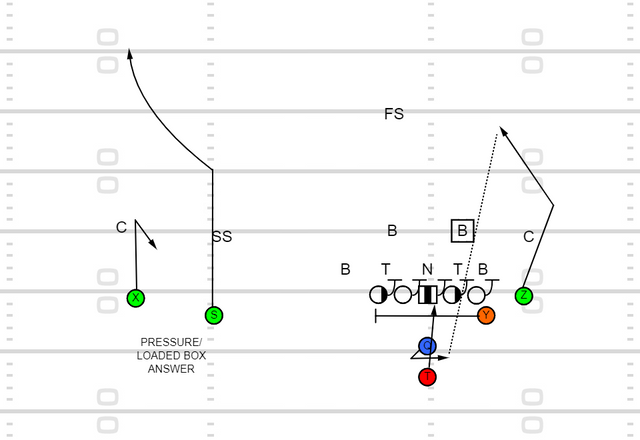 If he retreats to cover the glance route, then the QB hands it off up the middle and the back has one fewer defenders to worry about.

A lot of defenses have adapted. After all, the option isn't exactly a new concept, so they have come up with ways to make it harder for the quarterback to make his decision.

Some teams train their guys to slow-play the read and not commit hard in one direction or the other. Other teams have their defensive linemen "charge the mesh", meaning that that unblocked defensive lineman will try to attack the exchange itself and not give a hard vertical or horizontal read to creates an easy decision.

Defenses have also gotten better at playing those numbers games with offenses. Defensive coaches refer to this as "slinging the fit" - which is coach-speak for adding a different guy to the run fit (and removing someone else) depending on the movement of the quarterback post-snap.

This is an entirely different discussion altogether, but Coach Hoover put together a great blog on it here.

So what does the quarterback do when he's not sure?

The answer is simple: It depends.

Good coaches take advantage of what their players do best, and Coach Moorhead is no different. In a 50/50 situation, where the QB is unsure, he uses the terms "Aggressive Give" or "Aggressive Pull".

If the quarterback is a naturally-gifted runner, then he'd be told that the read is an aggressive pull- when in doubt, pull the ball and get what you can.

Conversely, if your quarterback is NOT a speedy and athletic runner, he'd be more likely to be an aggressive give.

It's important to remember that most guys running the RPO at the college level have some form of this pre-snap process for the quarterback, even if they don't follow this progression exactly. Coach Moorhead goes into more detail on this process here.

Still, this really limits the scope of what the quarterback has to worry about, and when you go through months of offseason installation meetings, spring practice, and fall camp, it seems very simple for most quarterbacks.

Players win games first and foremost, but Joe Moorhead has proved consistently that he has been able to get the most out of his players on offense at every stop in his career.

Akron should be fun to watch this fall, and the MAC just got tougher to defend.