Should Jim Tressel Be Akron's Next President?

Jim Tressel is now three years away from coaching at Ohio State and is one of three finalists for the president job at the University of Akron.

Share All sharing options for: Should Jim Tressel Be Akron's Next President?

Jim Tressel last coached a football game in January 2010 defeating the Oregon Ducks in the Rose Bowl.  The 2011 offseason came with blow after blow, with suspensions and fines and allegations upon allegations,  before finally ending with Tressel's resignation in May 2011.  The NCAA also hit Tressel with the dreaded show-cause penalty.

Since leaving Ohio State, Tressel has went on quite the unusual path.  He first joined the Indianapolis Colts as a consultant in a role that lasted just one season.  As to be expected, Tressel coaching rumors surfaced everywhere from the Indianapolis Colts to the Akron Zips (despite the show-cause penalty).  And then, in a twist, he took a job at Akron ....'Vice President of Strategic Engagement.'

Three years after leaving Ohio State, Jim Tressel is still one of the most recognizable figures in Ohio.

If it sounds made-up, well maybe it was.  The title was just another way of saying "raise money and bring students in".  So while it may have been considered a PR move, a PR move can usually result in both of those things: raising money and bringing in students.  Tressel seemed to have embraced his new role and has never mentioned a return to coaching.  He has even dabbled in teaching and is now pursuing the president job (where he's one of three finalists for the position).

But would Tressel be a good fit for the president job?  We took a look at some of the pros and cons.

I list leadership skills on my resume even though I have none to speak of, but Tressel can actually back it up.  Many people like to compare the role of a head coach to the role of a CEO, or in this case, the president role.  In both roles, you're overseeing large groups of people and have a number of coaches or executives with smaller roles reporting to you.

You have to think big picture and long term, while keeping a level head among chaos.  Tressel has proven to be a strong leader on the football field and many of those same skills can transfer over to his role as president.  He commanded respect as a coach and had a positive, calm approach that I expect will be similar to his approach as a president.

One of the big parts of Tressel's current job is to help with fundraising and it is also a large part of the president role.  Three years after leaving Ohio State, Tressel is still one of the most recognizable figures in Ohio, with ties to the University of Akron and Youngstown State, in addition to Ohio State.

When Tressel speaks at engagements and lectures and fundraisers, people want to hear him talk and will pay for that opportunity.  Tressel will provide the best opportunity for fundraising among the candidates, for a university with a massive debt problem.  The counterpoint is that Tressel is already doing fundraising for the university,

Tressel has now been at Akron in his vice president role for just over two years.  He has a familiarity with the administrative staff, the alumni, and the students that the other two candidates will have to build over a period of time.  The transition from that standpoint should be smoother as Tressel will not have to spend time building a rapport with his coworkers and fellow students.

More On Tressel's Love For Tupac:

The 10 Most Jim Tressel-Friendly Tupac Songs

More On Tressel's Love For Tupac:

The 10 Most Jim Tressel-Friendly Tupac Songs

Both of the other candidates have experience working at colleges, but can't match the day-to-day and close relationships Tressel has already had with college students.  Working with students has been a passion of Tressel's and he is able to connect on a much better level than someone who hasn't had the close personal relationships with younger students like he has.

He even tweets Tupac lyrics!

Yes, the important stuff.  While we here at Hustle Belt care about all aspects of our fellow MAC schools, of course we care about sports the most.  Tressel obviously has a background in sports that would make you think he would likely favor improving the athletic program at the University with a special focus on our favorite sport, football.

Tressel has just over two years in his administrative role, while the other candidates have had a laundry list of  roles in academia and administration.  I got bored reading through all of them, but they looked impressive in their length.  The seamless transition Tressel will have due to his familiarity at Akron, will be the opposite in terms of experience.  Tressel is still adapting to his role in administration and will have a harder time adapting to the day-to-day duties as president compared to the other finalists who have had years and years of preparation for the duties of the president.

Jim Tressel Is A Finalist For Youngstown State University President 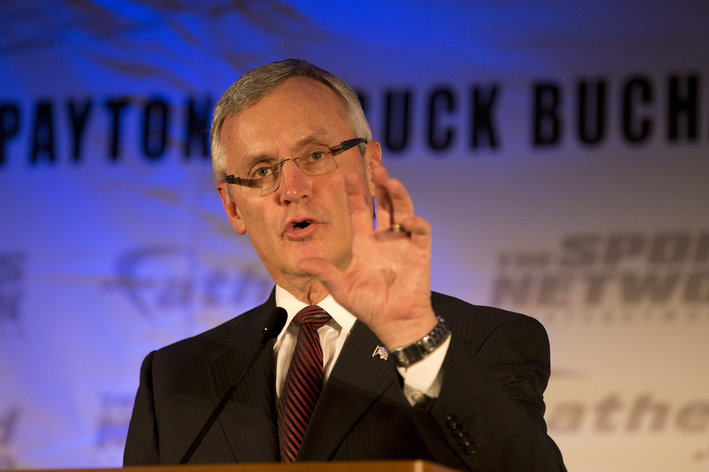 Akron isn't the only Northeastern Ohio university seriously considering Tressel for its presidency gig. Youngstown State, where he won several national championships in the 14 years he served as the school's head football coach, has also moved Tressel on as a finalist.

Tressel's show-cause penalty will come to an end in 2016.  Many believe he will want to return to coaching at that time.  There have been subtle hints by Tressel that he would consider returning to coaching over the years, but there has been nothing concrete.  At the end of the day, Tressel is a wanted commodity in the coaching world and the salary that will be offered will dwarf the salary of a college president.  Will he be tempted to leave his president role after just two years?  Even he may not know the answer to that, and I can't imagine Akron would want to hire a president with a two year exit plan.

Opinions vary widely on this topic.  Some will say his lying and withholding of information from the NCAA indicate a serious lack of morals and ethics.  Others will say the NCAA rules are so archaic that they are impossible to follow and meant to be broken.  While I understand that George Costanza once said "we are living in a SOCIETY" and rules are meant to be followed, I consider these violations very minor and have essentially no impact on his presidential candidacy.

Not just the other two finalists, but everyone who applied for the president role, with the exception of Tressel, has a doctorate degree.  This will no doubt be seen as a negative as president roles are traditionally held by those with doctorates (representing accomplishment in academia) and Tressel will be seen as lacking the same academic credentials that his co-finalists have.

So should Akron hire Tressel?  We obviously know a lot more about Tressel than we know about the other two candidates, but I think Tressel should definitely be seriously considered if Akron believes he is in for the long haul.  Hiring Tressel would be a unique and innovative approach to a role traditionally occupied by someone with more academia experience and more education, but rarely held by someone as well known and beloved as Tressel.