After ending the 2012 season on a four game winning streak, capped off by a bowl victory, the heat is off Dan Enos, and expectations are high in Mt. Pleasant.

Last year was an up and down season for Central Michigan, one that saw lows of getting destroyed at home by Michigan State, and slipping to 3-6 overall, and looking like Dan Enos would be on his way out of town. But somewhere along the line, the Chippewas found their stride on offense (and the weakest part of their schedule) and reeled off three straight wins to become bowl eligible. And they capped off that momentum to end the regular season in a great bowl game win against Western Kentucky. But gone are a three-year starting quarterback, and a No. 1 overall pick in the NFL Draft, so there are plenty of questions about the 2013 version of the Central Michigan Chippewas.

With that said, I wanted to do something different for the CMU Football preview. You can go a thousand other places to look up stats, or previews that are just going to give you a general overview of the upcoming season, tinted with a rosy, best possible outcome outlook. So I wanted to hear from the readers, the fans, and people just curious about CMU Football, so I reached out and asked you to submit your questions, and I would do my best to answer them.

NOTE: Some people submitted very similar questions, so I took the liberty of combining those questions so I didn't repeat myself multiple times on the same topic.

Nick/Eddie: Who is going to be the starting QB?

Well, that announcement was made Wednesday, and as I suspected all along, it is going to be the junior Cody Kater. Kater is really the best of both worlds for the Chippewas, a good passer, who is mobile with his feet. Compare that to the competition he faced before Enos' decision, Alex Niznak is more a scrambler than a passer, and Cooper Rush who was the best passer. 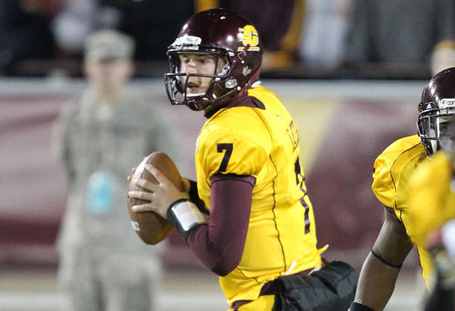 I'm looking forward to seeing Kater run more than anything. As you'll recall, Ryan Radcliff was not the fleetest of foot, so when things broke down in the pocket, he was either throwing the ball away or going down for a sack. It'll be nice to have a threat back there who can create when things might be looking bad. That being said...

Nick/Mr. Hautau: Will we see multiple starting QB's this year? We have plenty of options.

That's hard to say right now. Enos said that the competition was close all spring and fall, and has already dropped hints that he may find ways to get the athletic ability of Alex Niznak on the field. Whether that's starting, or bringing him in like a wildcat player, or for trick plays, that remains to be seen.

But barring an injury, I'm going to say "no" to the multiple starters question. The only thing that worries me is if Kater struggles out of the gate, and Enos gets trigger happy because of how close he thought all three quarterbacks were. I said in a Q&A on another site that I wouldn't be surprised to see all three quarterbacks get playing time, and I still feel that way, but I think Kater will play well enough to keep the job all season, barring injury of course.

Zach/Dylan: How's the WR core/passing game going to be this year, last season it was pretty inconsistent so we're curious to see what it will look like.

I think that under Dan Enos, this is the deepest the WR position has been. Yes we did lose Cody Wilson, the ultimate possession receiver, but stepping up to replace him are Courtney Williams, and Andrew Flory. Both of these players are bigger, and faster than Wilson was, so they are going to be more a threat downfield than Wilson ever was. The player to keep an eye on is Flory, he had a huge game last year against Eastern, catching nine passes for 117 yards, and two touchdowns. I think he could be the breakout player on offense for the Chippewas.

And as for the passing game as a whole, I expect them to put up numbers similar to last year. Really, the passing game wasn't bad last season, their numbers just looked down because CMU found it's offensive identity in RB Zurlon Tipton. The first time that the Cippewas' offense focused on running the ball in many years. So with the threat of Tipton looming in the backfield, I think that will open things up to make the passing game very efficient this season.

Eddie: How is the offensive line going to look after losing Fisher?

The offensive line will be just fine this year. Yes, they lost Eric Fisher, but people are forgetting that they get back Jake Olson, a sixth year player who was a freshman all-american and was the left tackle for a while, even with Fisher on the team. He has had injury problems, and it was because of those injuries that Fisher even got to play left tackle. If he can stay healthy all season, the offensive line shouldn't miss a beat.

Under Enos, CMU has built quite an impressive collection of offensive linemen, and every starter this year is going to be along the lines of 6'4"+, 300 lbs. +. They have an offensive line that can compete with some of the teams in the Big Ten as we saw last season.

Zach: Are we going to see a secondary that's actually going to stop plays from happening?

The idea that the secondary is awful is a bit misleading. CMU plays an unconventional 4-2-5 defense, designed to get more speed on the field, and help against the spread offenses you typically see in the MAC. The problem, is that defense is a bend-but-don't-break defense that's designed to try and contain offenses rather than completely shut them down. Despite losing Jahleel Addae, the secondary is very experienced, and should be improved this season.

But part of that improvement needs help from the defensive front four, who are relied on to get most of the pressure on opposing quarterbacks, because they typically don't blitz much. If the defensive line can't get pressure on the opposing quarterback, I don't care how good your secondary is, nobody can cover someone forever, and that was part of what plagued the CMU defense.

Dylan/Mr. Hautau: Who does CMU have a chance to pull off an upset against, similar to the Iowa game last year?

Two MAC games that CMU will probably be underdogs in, but are going to be close games that could impact the MAC West race are against Toledo, and defending MAC Champion Northern Illinois, both at home. CMU was able to knock off NIU the last time they visited Kelly/Shorts in 2011. CMU and Toledo played a close game last year deep into the fourth quarter, until Ryan Radcliff threw a pick-six, and sealed CMU's fate, so with the game being in Mt. Pleasant this year, it could be the difference they need to pull off the upset.

Outside the conference, I'm looking at the game at North Carolina State. NC State is coached by former NIU head coach Dave Doeren, so CMU should be familiar with the style offense he is going to run. NC State was a decent team last year, but loses quite a few players. If this game were a little earlier in the year, I would like CMU's chances even more. Two seasons ago CMU hung tough with the Wolfpack, down less than a touchdown at the half, but the offense stalled in the second half, and NC State pulled away. This could be a chance at redemption for that game.

Eddie/Mr. Hautau: Is Dan Enos on the hot-seat and will he still be head coach to start the 2015 season?

I know people were down on Enos, myself included, for most of last season, but the fact is he ran off four straight wins, including a bowl victory, late in the season. Add to that that he just got a four year contract extension, and it's safe to say that he is indeed off the hot seat for the time being. I would say he probably bought himself at least two more years of being in good graces, provided he avoids a disaster type season of 3-9 or worse. 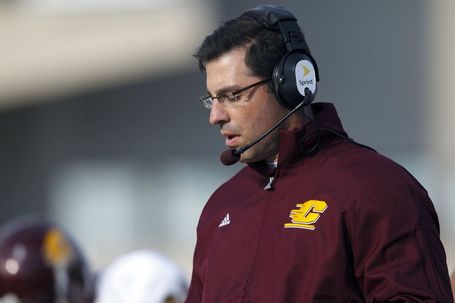 For the second part of that question, I think he will still be the coach in 2015. I don't see an amazing run like Butch Jones or Brian Kelly had coming that would see him hired away, and I don't think he'll have that disaster type season that lands him in hot water either.

Looking at their schedule, CMU has three games that you should expect to win, four games that are probably losses, and five games that are toss-ups. The problem is that the five games I consider to be toss ups, are all on the road. So if the team is going to make a return to a bowl game, it's going to have to play well on the road, something that it hasn't started to do under Enos. Truthfully, I think this years team would beat last years, but a tougher schedule, and fewer home games won't make it look that way when the season ends. 5-7.

Thanks to everyone who submitted questions, and if you have more, feel free to leave them in the comments, and i'll do my best to answer them down there!

All Photos are Courtesy of CMUchippewas.com