The stage is set, the bracket is made, tie-breakers are decided, and it's time to get ready for some MAC Baseball to finally take place in Avon, Ohio. Time for a somewhat lengthy preview of the festivities.

Like every tournament, there's a process of elimination when it comes to deciding where teams are seeded. Thankfully, for the MAC Baseball Tournament this is all pretty straight-forward until it comes to worrying about the final seed with a 3-way tie. But, let's take a look at the bracket and give a short intro for each team by their seeds. 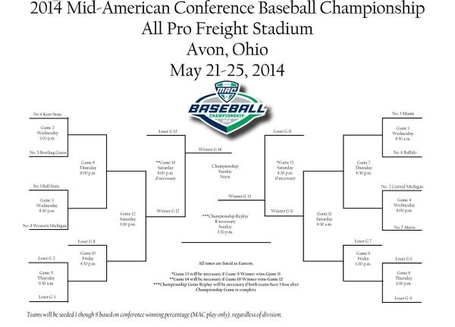 Best winning percentage in the MAC means you're the outright number one seed in this tournament. Now ranked 26th in the nation by the Collegiate Baseball Poll, the Cardinals chances to win the tournament are as good as ever.

The chances of being the no. 1 overall seed in this tournament faded away once Ball State came in and swept the Chippewas at Theunissen Stadium not too long ago, but it didn't hurt them all too much. From what I've been hearing, Pat Kaminska is a likely option for head coach Steve Jaksa to use in their opening game of the tournament (will be against Akron). But who knows, that could all just be a bunch of needless hoopla.

First year head coach Danny Hayden got this team to the MAC tournament winning the MAC East Division. But if you look closely at that winning percentage, you can see why I'm starting to think that Hayden is actually part of the illuminati, which explains absolutely nothing about anything. There's a triangle in there somewhere.

The team that everybody and their mother (except for mine) picked to win the West division and the conference tournament is 7-8 in their last five series against MAC foes. Not exactly something that this team had hoped for with all of the hype they respectably receive in the months leading up to the season, but this is where they're at, so there's no better time than now to turn things around. No, seriously, this is undoubtably the best time to make a turnaround.

Last year, we saw the Falcons make an unlikely run at the MAC Tournament championship as a six-seed. A more established team with Mike Frank as a solid ace can give the Falcons more excitement entering this year's tourney than last year's. It's easy to be intimidated by Kent State in the opening round, but they did take the 3-game series over the Falcons at home just under a month ago.

I prematurely believed that the Bulls would be a 3 or 4-seed in the tourney after going 11-6 in MAC play through the month of April, but six isn't all that bad, either. This team goes where Mike Burke goes, whether he's in the batter's box or on the pitcher's mound. But the unfortunate thing for them is that they were swept by the RedHawks at home.

After a hot start, the Zips finally slipped down and didn't win a MAC series since their home sweep over Ohio in mid-April. Since then, they fell to Bowling Green, Buffalo, Ball State, Northern Illinois and Kent State.Luckily for them, the 9-3 start in conference play was good enough to squeak into the conference tourney.

This is the fun one. Sorry it took forever to get to this point. Western Michigan, Toledo and Northern Illinois are all 11-16 in conference play, so a few tie-breakers were taken into consideration for the seeding.

First, we have one of those "triangle" things going on where WMU beat Toledo, Toledo beat NIU, and NIU beat WMU. Cool, way to make things harder, guys. To help us out, this is from the MAC's preseason memorandum about how to deal with these damn tie-breakers:

When comparing tied teams against positions lower in the standings, which are also tied, those lower-tied positions will be considered as a single position for purposes of comparison. (Example: Team A and Team B, who tied for second place, would compare against Team X and Team Y who tied for 6th as follows: Team A would compare its combined record against both X and Y against B's combined record against both X and Y.)

Examining the MACtion: Why so many pitches, coach?

Are some of the MAC's own baseball teams feeding into one of the biggest red flags out there for preventable causes to one of baseball's most pressing injury concerns?

Examining the MACtion: Why so many pitches, coach?

[Asterisk* indicates the "if necessary" games]

How Do I Watch?

Unfortunately, we still live in a world where all of our favorite MAC sporting events aren't always caught on ABC, NBC, Fox, ESPN or whatever other channels, but it's cool. Other than actually going to Avon and watching the games live, you can watch all of these games via live stream on the MAC Digital Network. As for the Championship game, you can catch that on ESPN3 and on Time Warner Cable, with a replay of the game starting at 3:30.