Bowling Green's powerful second half does in Western Michigan, 70-60

WMU rolled the dice by guarding the Falcons' tiny point guard with a tall athletic guy, and it worked for a little bit — although the Falcons team effort showed up again to put away the MAC West leaders.

Share All sharing options for: Bowling Green's powerful second half does in Western Michigan, 70-60

This season wasn't making sense in the first place, so what's the point in trying to figure any of this out? Beyond Akron and Ohio the MAC basketball field has been an Erratic Belt of performances, with the exception of perhaps WMU and Toledo. But then UT lost badly at Toledo and now the Broncos have dropped two straight puzzling games: one at Ball State and another one at BGSU. I suppose when you're the de-facto third-best team in the conference, games like this are going to happen.

The most interesting matchup of this game was how WMU coach Steve Hawkins tried to slow down the pint-sized Jordon Crawford. He put his versatile senior Nate Hutcheson, a tough-as-nails defender, on him. For those keeping score at home, that's a 5'6" point guard being shadowed by a 6'7" wing. If you missed it, here's a reenactment, exactly to scale: 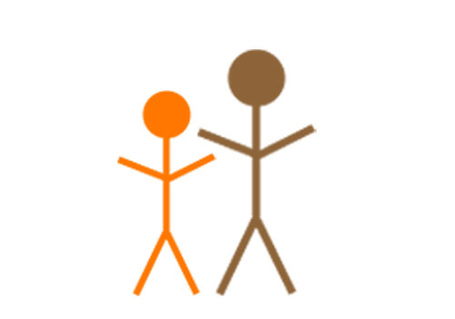 This was a ballsy maneuver by Hawkins. Hutcheson's wingspan and quickness might've been enough to frustrate Crawford, and he did an admirable job of keeping up with him, but ultimately the matchup leaned in favor of BG in the second half. Crawford finally got going, as did Calhoun, and the Falcons shot over 60 percent in the half.

Be a trailblazer, I guess.

What this resulted in was Crawford scoring 13 points on 10 shots and being responsible for six turnovers, so it had some moderate success. It may have been a wiser gambit to use Hutcheson to slow down A'uston Calhoun, since the game was all his: 24 points on 10-for-17 shooting.

The thematic saga of third and fourth players stepping up also had a great effect: Chauncey Orr scored 11 points, including 7-for-7 on free throws and Richaun Holmes added an efficient eight points on 3-for-3 shooting to go with nine rebounds, three steals and two blocks.

Western is arguably the top rebounding team, and offensive boards was something they dominated again including six by Shayne Whittington, who finished with 13 points and 15 overall rebounds. Hutcheson had 14 points and Austin Richie finished with 14 points on seven shots.

So yet AGAIN, Bowling Green is enmeshed in a middle group of teams at 5-6, now tied with Kent State and Buffalo for the fifth best record. That's a magic number as the No. 5 team automatically goes to Cleveland. WMU (and Toledo) are both now at 7-4, three games behind Ohio and that pretty much sinks any chance of the Broncos getting a semifinal seed.