Akron and Ohio pushed the limits of regulation Sunday night, needing two overtimes to crown a winner in their first matchup of 2014. The two teams showed why their rivalry has blossomed into one of the best in all of college basketball in a game so intense it left players lying on the court in exhaustion at the end of double-overtime.

Akron and Ohio have built up a rivalry as good as any in college basketball over the past five seasons. For five straight years the two have faced off in the MAC Championship. In 2013 they produced a pair of high-octane thrillers that are sure to stick in the memory of MAC fans for some time. The rivalry has produced two of the best players in MAC history, D.J. Cooper and Zeke Marshall, and offers more intensity than a PPV boxing match. But Sunday night in Athens, OHio in their latest face off the two teams one-uped the whole damn thing.

They fought in a battle so intense 40 minutes wasn't enough. No, this game couldn't be contained by regulation. In the end it took two overtimes and enough grit to fill a dump-truck for a champion to be crowned, with Akron taking Round 1 of the 2014 installment 83-80; the Zips' fourth straight against Ohio.

As they had done all game the 'Cats (11-4, 1-1 MAC) and Akron (10-5, 2-0 MAC) traded blows through the first three minutes of double-overtime. Then, after a pair of Nick Harney free throws pushed their lead to three, the Zips' increased defensive pressure proved too much for Ohio. The 'Cats missed six-straight field goals down the stretch, while Akron's Quincy Diggs, who had 20 points and seven boards on the night, charged the lane with 30 seconds left to grab his own offensive rebound and keep Akron's lead intact on the putback.

A pair of last-ditch threes by Nick Kellogg just missed sealing the deal and leaving him lying on the court, exhausted. Kellogg had 19 points in the loss, going 2-for 7 from behind the arc.

But as great as the game's finish was, it started off slow.

The first half was sloppy. At the under 12-media timeout, the Zips led 8-5, but the two teams combined to go 5-for-25 from the field. Ohio was forcing threes, which were well off target. Smothering defense, combined with poor shooting led to a slow-paced back-and-forth half with neither team able to capitalize on breaks. 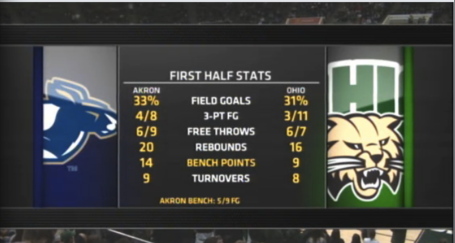 With the defensive pressure on and both squads attacking, it led to a low-scoring affair. The games two-best players—Akron's Demetrius Treadwell and Ohio's Maurice Ndour—were awful in the first half. They each had just four points and were non-existent forces on the court. Fouls and turnovers were rampant. Ndour, Carmelo Betancourt and Diggs all had at least two fouls in the first half. The rivals combined for 17 turnovers and shot just 32 percent from the field at halftime. But still, the intensity was there.

You could see it in the tenacity with which each team played defense, and just how hard they made it for either to produce a bucket. Akron managed just three field goals in the final 10 minutes of the first half, but still managed to take a 26-25 lead into the half.

Ohio's Ndour, who missed the final few minutes of the first half after getting into foul trouble, picked up that intensity in the second half. He scored 11 of Ohio's 19 points to open up the first eight minutes of the second half and gave the 'Cats a comfortable three-point lead. Ndour, who finished the night with a game-high 25 points and six rebounds, was all over the floor in the second half, and combined with the spark provided by Stevie Taylor, Ohio cruised out to a nine-point lead with just over eight minutes remaining in the half.

The Bobcats were able to control the tempo largely due to Akron's lack of a true floor general. With no one player to control the point and Ohio attacking from all fronts the Zips were turning the ball over at a torrid pace midway through the second half.

But led by Diggs, and a strong surge from forward Nick Harney, who had 10 points in the game and six of them in the final four minutes, the Zips just wouldn't back down. After Harney cut Ohio's lead to three with 4:18 to go, he and Diggs powered Akron through to the end of regulation and sent the game into overtime tied at 60-60.

The first overtime opened with Ohio controlling the momentum. The Bobcats, led by Ndour and Kellogg on offense and Jon Smith on defense jumped out to a four-point lead just over two minutes into the OT period. Smith was downright nasty on the defensive glass, even stuffing Akron forward Demetrius Treadwell three times on one possession. Smith finished the game with five points and an eye-popping eight blocks on the night. The 'Cats grew the lead to 68-62 on a finger roll by Kellogg with 1:44 left. But it wasn't enough to shut the door on the feisty Zips.

Diggs once again took over, scoring the final five points of the first overtime period and sending the game into double-overtime tied at 71-71. The Roos' sixth-man carried the momentum into the second overtime as Ndour fouled out and Taylor and Kellogg treid to force threes to send the game into a third overtime.

In the end the barn-burner of a game lived up to the hype and proved once again that no two teams play each other with as much intensity and hatred as these two.

Five Zips scored in double-figures, including Treadwell, who had just four points at halftime, concluded his evening with 16 points and a game-high eight boards, but was far from dominate. For Ohio, it was just three, but Travis Wilkins, a three-point specialist, showed just how much this game can bring out of a player. He was one of the most aggressive players on the court Sunday night, making the hustle plays and racking up 14 points.

For Ndour, a first-time player in this rivalry, the rematch can't come soon enough.

#OhioMBB Ndour on Akron: They don't like us, we don't like them either. I can't wait to play them again.

These two teams will get to continue their epic rivalry when Ohio heads up north to Akron on Feb. 22., but for now they each seem to be in control of their own destiny in the MAC East.