A little less than 60 hours after Jim Christian stepped down as head coach of the Ohio men's basketball team to take the same position at Boston College, the Bobcats announced the hiring of former North Dakota State head coach Saul Phillips. Ohio took to Twitter EARLY Sunday morning to announce that Phillips has been hired as the new men's basketball coach.

Phillips was rumored to be the leading candidate less than 12 hours earlier when reports claimed Ohio athletic director Jim Schaus had narrowed his search down to just four names. Also considered a candidate for numerous other jobs, including Tulsa and Marquette, Phillips is now officially a Bobcat.

"I am extremely excited about the future of Ohio basketball," Phillips said in a release. "I am elated to have a chance to add to its rich tradition."

Phillips burst onto the scene as a media darling this March, when his 12-seeded Bison beat Oklahoma State in the second round of the NCAA Tournament. His team fell to  San Diego State in the next round to wrap up a 26-7 (12-2 Summit) season. 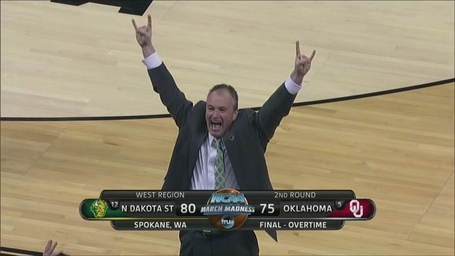 A charismatic coach with a big personality, Phillips is beloved by fans across the nation for his candor. He was moved to tears in the post-game presser after his team beat Oklahoma in the big dance.

In seven seasons as the NDSU head basketball coach Phillips compiled a win-loss record of 134-84, and led the team to a pair of NCAA Tournament appearances. Before he took over as head coach of the Bison in 2007, Phillips spent three seasons as an assistant at NDSU. A disciple of Wisconsin's Bo Ryan, Phillips served on his staff as the Badgers' Director of Basketball Operations from 2001-2004. He also played under Ryan at D-III Wisconsin-Platteville in the early 1990s.

Ohio has turned into a preeminent mid-major in recent seasons. The past two coaches both left for high-major jobs—John Groce to Illinois, Christian to Boston College—in a matter of just a few short years. The hiring of a head coach from a fellow successful and prominent mid-major program illustrates the rise in stature of the Bobcats' program has undertaken over the past six seasons.

Phillips is now tasked with building off a team that went 25-12 (11-7 MAC), and made its fifth consecutive post-season tournament. The team is losing several seniors, including the MAC's all-time leader in 3-pointers made, Nick Kellogg. The team also has undergone some internal turmoil lately, with one player, senior center Jon Smith, going so far as to say Christian's leadership had a direct influence on his decision to quit the team after the regular season ended.

Righting the ship, winning over the current players and making up for the recent loss of an elite recruit in the team's 2014 class will surely be Phillips' first steps as Ohio's head coach.

"I share the vision of the administration as to what the enormous potential is of this storied program," Phillips continued in the release. I simply cannot wait to start working with our players and helping them reach their potential. I want our fans and my players to know that I will pour maximum energy and enthusiasm into Bobcat basketball."

One things certain, Ohio is all in on Phillips.