The Importance of Crootin: Does it Even Matter

The Raiders took Khalil Mack at fifth overall in the NFL draft. Yet he was ranked by 247sports and Rivals as a 2 star prospect, and not even given a ranking by ESPN. Does this mean the recruiting sites have no clue what they’re doing?

Share All sharing options for: The Importance of Crootin: Does it Even Matter

It's been well documented that recruiting sites tend to get the talent level of big name prospects right more often than not.  Most these studies look just at 4 and 5 star prospects of top tier BCS schools. From 2009-2013, the MAC has seen just one four star prospect grace its presence straight from high school. When dealing with the MAC, whose teams do not bring in top tier talent, do recruit rankings even matter?

To figure this out, I compiled every MAC teams recruiting information from 247Sports for 2009 through 2013, focusing on 3 star recruits and better First I looked at how a team's recruiting class affects their conference record in their first year at college (note: I did not account for redshirts or transfers). 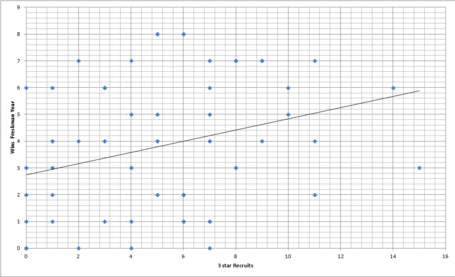 That was easy enough. There's a clear increase between the number of 3 star recruits a school brings in and the number of wins in conference the team sees (I used conference record since strength of non-conference opponents varies per team). This could be the cause of winning in the prior year bringing in more 3 star recruits. Let's look at how those recruits affect a team two years down the road. 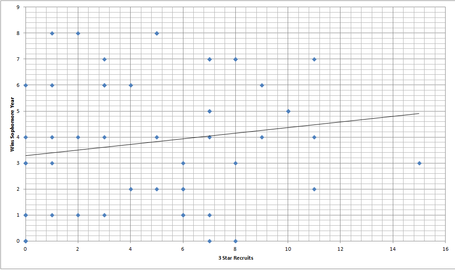 Our trend-line flattens a bit, but still shows an increase in wins for the increase of recruits seen two years ago. 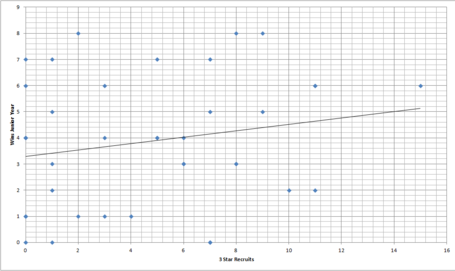 As we go three years out, our 3 star recruits are maturing and we see a stronger impact between good recruiting and winning. 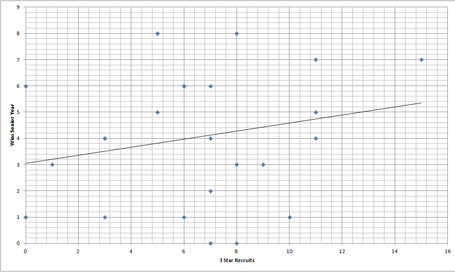 And finally as we hit their senior years (once again, we're pretending there aren't redshirts), the trend-line is almost as strong as year one. While all four graphs have outliers, there's a correlation between 3 star recruits (and our one 4 star recruit) and winning.

What does this all mean? It means P.J. Fleck might be a taking Western Michigan University Broncos north in the standings. It means Toledo is poised to make a run this year. It means Bowling Green is going to be around for awhile. And it means that as a fan, knowing the names of your key recruits is the best way to get ready for the season.